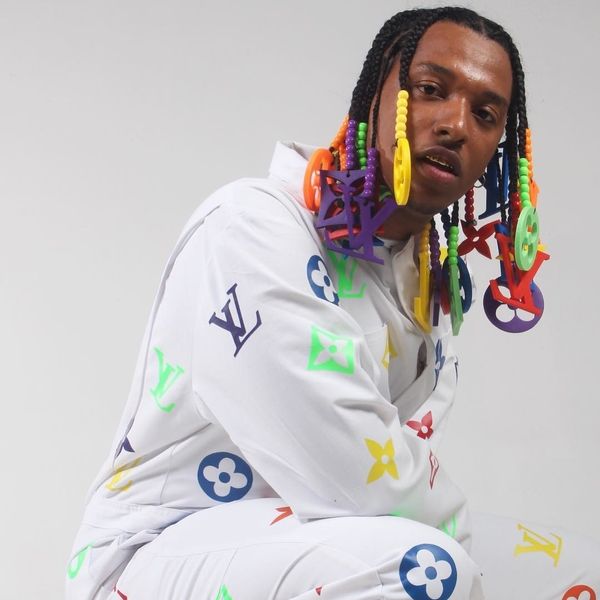 In Beads and Braids, Magnus Juliano Is Winning 2019 Already

Watching someone win, especially when you know they deserve it, is a magical kind of relief. It feels like confirmation that, with all its awful, the world is also sometimes just, too. Magnus Juliano, the creator of the viral Louis Vuitton braids, has earned a bonafide win — and yes, he most definitely deserved it.

PAPER first spoke with Juliano weeks ago: He was grieving for his recently passed grandmother, the matriarch of his family, and his partner was having issues with his own relatives. Problems at Juliano's day job in Columbus, Ohio, had spiked — a situation he made public that was the reason for our interview — and there was little mental or emotional space for his creative work as an artist and musician. Life wasn't cutting him any slack, to say the least.

"Isn't this conversation a 180 from when we talked last time? Last time we talked it was, like, doom and gloom," Juliano laughs, talking with PAPER by phone last Saturday afternoon. "Don't get me wrong. There was still positivity in that, and just speaking truth. But now, I'm just like, Life's actually not too bad!"

In the week since Juliano shared the first image of his bold-and-bright, 3D-printed take on logomania, complete with matching jumpsuit, he's been featured online by Vogue, BET, the Daily Mail, Harper's Bazaar Spain, Refinery29, Cosmopolitan Italia — and the press keeps coming.

Now he has almost 14k followers, around 10k of them new, watching to see what he'll do next.

Between fielding interviews, though, he's been crying — the tears of joy kind, the I've-seen-light-at-the-end-of-the-tunnel kind.

"So much stuff has been going on in my life. So this is a victory," he sighs. "Just to get noted for something I'm good at outside of all the drama and chaos. It's just good to feel good."

And Juliano has plenty reason to feel great about the sensation he's created: Visually, it's a high-saturation dream, captured by photographer @mystic_elena, the brand's logo as exaggerated pieces with matching beads, the contrast of the clean, white jumper against more monogram, meticulously patterned via vinyl heat press. All the time-consuming troubleshooting, working with a studio run by his former art instructor and her partner, the visibly successful teamwork between a crew of creatives — and, very notably, Juliano's fighting refusal to allow life's predilection for bullying to stamp out his spirit.

It's not just a satisfying aesthetic Juliano's delivered, though — it's an homage to how ancestry connects with his identity today.

"There's just so much history in its ritual culture; it literally used to be a way to tell the difference between certain tribes and villages and identities," Juliano says. "Then where Black girls would get their hair braided and their moms would attach beads and other hair accessories, and then when we got a little older, the hairstyle that I wear pretty often with the single braids and the beads — that was pretty big when I was a teenager, wearing beads and braids. It's just tied into the fabric, the very fabric, of my culture, my history, my ancestors. It really makes me feel proud of where I come from when I wear beads and braids."

Before this, you might have seen Juliano in beads and braids already: The crystalline contribution to Afrofuturism he wore at AfroPunk last year was a hit. On Instagram he's also served a LEGO look and a feathered version, too.

"A lot of times, people were forced to feel ashamed of our hair, so it's a sense of a pride: My hair is my pride," he says. "Not that it makes me, but it definitely is an ode to all types of people who came before me."

Clicking through his social media, though, you'll also notice two posts from Juliano's before — today, of course, he's reveling in a happier after. His expression stands out among the rest; the confidence he carries is still there, but now it's filtered through indignation.

On Black Friday of last year, Juliano wore the shirt pictured — which reads, "Stop Racism Against Black People" — to his shift at the Columbus H&M where he works. It didn't go over well with his boss, who, according to Juliano, said the shirt was "too controversial." She worried customers would be upset by its message, and told him to either change clothes or abandon his shift. He chose the latter.

Back at home, Juliano checked company policy to find he hadn't infringed on any of its rules. At his next shift, he wore the shirt a second time — his manager added this to Juliano's "documentation" — and then a third, and fourth, and so on. For weeks, he wore the shirt to every single shift.

Throughout the three-and-a-half years Juliano worked at that store, he was an exemplary employee, he says. But the environment was toxic, he says: An internal investigation at Juliano's store was already underway on Black Friday as a result of various allegations of sexual assault, racist remarks, and racial insensitivity. Juliano, who himself had been assaulted by another employee, was one of the first to speak up. He felt targeted.

Juliano has yet to receive an apology from store management or company higher-ups: "I was told, basically, that I imagined my discrimination," he says.

The store manager in question said she was not authorized to comment. Media relations, however, did respond to PAPER's inquiry by email: "At H&M, we are committed to fostering and cultivating an inclusive, fair, safe and healthy work environment for all of our colleagues. When claims of discrimination or harassment are brought to the Company's attention, they are taken extremely seriously and are promptly and thoroughly investigated. H&M has robust internal processes, practices, policies and trainings in place to investigate and address such claims. In order to respect the confidentiality of our colleagues, we are unable to disclose specific information regarding active employees."

Juliano had been on vacation before his LV look blew up — and now he's not sure if he'll ever go back to H&M.

"Where I'm at right now is a really good space, so I really don't want to be let down mentally or attacked mentally," he says. "I want to keep this morale going, so I haven't been back since. We've been talking about that, me and my partner. There may be opportunity for me to make money or earn outside of that place, and if putting that behind is a part of my story, my journey, then I feel like that's probably going to be for the best. Just for my safety right now, I don't want to be even more bullied or even more attacked. I don't think it'll be worth it."

Having proved himself a creative force, the opportunities he hopes for may be on the way. Learning the ins and outs of a company — obviously, Louis Vuitton is a top choice — through an internship or job is his goal. In the meantime, he'll keep working on independent projects and collaborations. And he'll return to music soon, following up on his earlier single, "Legendary Already." Its eponymous affirmation today feels especially prophetic.

"There is this funny, funny quote that Mo'Nique said on Charm School; you remember that series back in the day?" Juliano asks. "She said, 'You do clownery, the clown comes back to bite.' So we don't know what that means, but it just sounds good. [Laughs] I feel like I'm moving with that quote. I am just enamored by the success that I'm having now and the notoriety I'm getting now, and I just want to live."