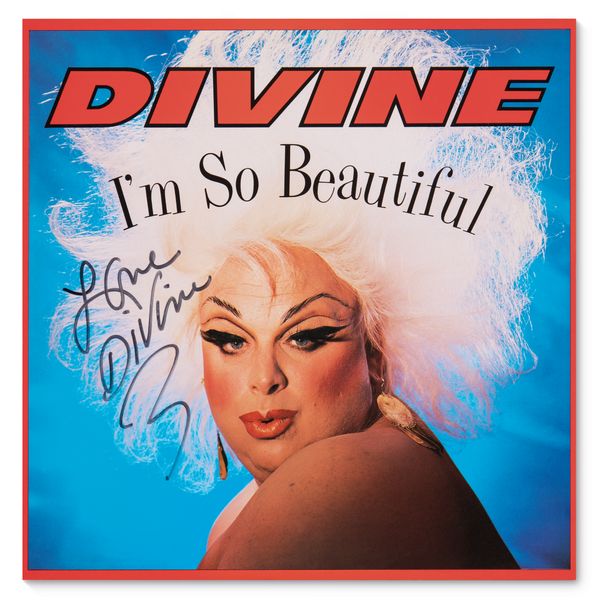 Filthy '70s Drag Legend Divine Finally Gets His Due

The term "larger than life" is often used to describe anyone with a bold personality, but many would argue that no one has embodied this as effortlessly as Harris Glenn Milstead, AKA Divine. The drag performer's "trashy" behavior and camp persona made him a household name in the '70s and '80s, where he wore words like "obscene" and "filth" as badges of honor.

His distinct look and stage presence even inspired the visuals for Ursula in The Little Mermaid, and his portrayal of Edna Turnblad in the original Hairspray movie became the benchmark for future musical and film adaptations. (It's why John Travolta was cast to play a woman FYI.)

While Divine's legacy is indisputable, newer generations aren't necessarily familiar with his body of work, despite his influence still permeating through drag culture today. It's fitting then that, in the middle of Pride month, Loewe is dedicating an entire exhibition and collection to the drag icon, who passed in 1988.

"He preempted the glorification of trash, the mix of high and low, the fantastic erasure of gender barriers," said Loewe Creative Director Jonathan Anderson. "I thought it was time to celebrate him, the LOEWE way."

Though plans to develop a full collection were halted due to the effects of the global pandemic, the Spanish house was able to create a capsule of three T-shirts and a tote bag with Divine imagery and graphics. The exhibition, meanwhile, will now take place online and feature tons of Divine memorabilia and pictures. They'll be accompanied by mannequins wearing Divine's signature makeup look and the entire unproduced collection.

Loewe is donating 15% of proceeds of the capsule to Visual Aids in support of HIV/AIDS awareness and relief efforts. They also made a separate contribution to Baltimore Pride, a Black-led LGBTQ+ organization and the hometown of Divine.

"I think it is a timely initiative, in that it is a celebration of creative freedom and challenging the world order," Anderson said. "That's what Divine was all about: creating his own incredible world, no matter what. Now more than ever, that's what we all should do."

The Divine limited edition collection will be available June 25 on loewe.com. The online exhibition will also run from June 25 until the end of September at loewe.com.