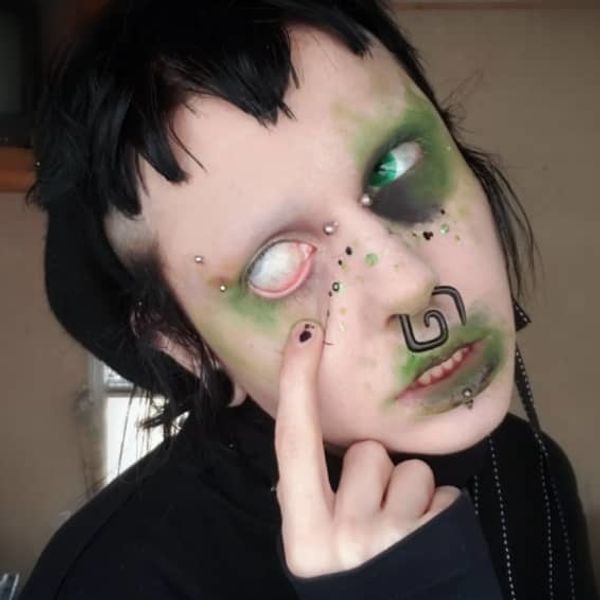 The Instagram account @kisscult — or the "world's babiest cult leader" — looks like an ultra-goth feed of a rebellious teenager, curated with images featuring eerily dark and macabre looks. Eighteen-year-old Tweek, the person behind the peculiar account, cites making people uncomfortable as his primary inspiration.

"I like to get ugly... I was born a creep and only embraced it the older I got." he says. "I use paint, superglue. dead bugs and makeup to accentuate the things that make people uncomfortable about the human appearance. Then I post it online, that's how all the beauty gurus do it, I think."

The ultimate goal behind his work, as Tweek puts it, is to challenge conventional ideas and standards: "Life's too short to not write 'RAT' on your forehead," he says. "You're stuck with your appearance forever and I think it's boring to always worry about looking the way people want you to."

The teen, who identifies as more of a "living puppet show" than a makeup artist, hopes to communicate this idea most fiercely through his shocking work. "My ideal world for the makeup industry, the modeling industry, social media, or just general thought process would be one where beauty was equivalent to happiness."

In talking with PAPER, the Instagram artist breaks down his inspiration, the intensive process behind the unique looks, and his take on contemporary beauty.

Tell me about everything that inspires you to create these looks.

I'm pretty sure being a weird goth was meant to be since day one. I grew up in a classic horror film setting: the middle of the woods, which is about 45 minutes away from any town bigger than a gas station and a corner store. My older brothers were really into scary movies, alongside my parents who were really into classic goth musicians like Marilyn Manson and Robert Smith.

I was always so fascinated by the ambiance of the macabre and obscene; mainly because it was always around me, no matter where I went, and that was my home. It was so normalized in my household that I couldn't really imagine myself as anything other than a lanky pale dude who showed emotion through writing words right in the middle of his face. My home was right between Saw on VHS and my parents' new Korn record. I was born a creep and only embraced it the older I got.

Is there a particular process behind your work?

When I create, I always try to dedicate at least an hour of my time to thinking about why I'm making what I'm making. I'll try to set a color scheme or just a few words as a general outline. Then I'll pace around or try to write a little tagline until it comes down to actually breaking out the eyeliner, eyeshadow, Sharpie markers, watercolor paint kits — whatever I need to get across the point I'm trying to make; whether it be a vent session pertaining to mental health and insecurity, or just a dedication to a holiday I'm excited about. I try to string together stories while I work and a lot of the time it gives me new ideas for extra details or even a new look altogether.

"My home was right between Saw on VHS and my parents' new Korn record. I was born a creep and only embraced it the older I got."

Would you define yourself as a makeup artist?

In a way, I feel less like a makeup artist and more like a living puppet show. Body art, both makeup and mods, give me a sense of control and story even. In public, I can actually see the cogs whirring in people's heads when they look at me, like they're piecing together either what my makeup means or why on god's green earth someone would ever show their face like that. I don't have to say anything to make people formulate their own little stories for me. It's very interpretive, a lot like old-time puppet show booths were in early Egypt, Greece, or Rome.You were given abstract and different characters, marionettes on display, and you could see what they were doing but the 'why' was almost always up for debate.

I'm still the puppeteer and I know why I'm doing what I do. I'm drawn to conveying a recurring theme in all of my makeup looks to remind anyone looking that you don't have to adhere to the same thing as everyone else when it comes to appearance. It's okay to want to put on just a little natural makeup to look pretty, but it's also okay to take yourself less seriously. Make yourself uncomfortable; live up to your own standards of what 'ugly' is. Push your boundaries, learn to laugh at yourself. You're stuck with your appearance forever and I think it's boring to always worry about looking the way people want you to. Life's too short to not write "RAT" on your forehead.

"Life's too short to not write 'RAT' on your forehead."

I use a lot of unconventional makeup, which is something I've only realized by looking at other MUA's material lists. Most of them don't typically have acrylic paint or 2007 stick-on earrings in their kits that I'm aware of. In terms of materials that are supposed to go on your face, I really, really love Sugarpill and Too Faced's shadows and blushes! My favorite highlighter ever is this sick green-blue tinted liquid called Ectoplasm from an up-and-coming brand called Apocalyptic Beauty I use it almost every single day because it makes me look significantly more ghoulish, and that's the vibe I think I'm always going for.

What does beauty mean to you and what would you like to see reflected within the industry?

I think beauty isn't nearly what we make it out to be. My ideal world for the makeup industry, the modeling industry, social media, or just general thought process would be one where beauty was equivalent to happiness. Beauty shouldn't be determined by how much money you drop on a pair of shoes or a new foundation, or how well you follow a guru's tutorial.

Beauty should be comfort and love with whatever you feel best in: bare skin, caked-on makeup, high-end concealer, or a cheap lipstick. It all has the potential to be beautiful if it makes someone happy. There needs to be an influx of support for people who don't want to wear makeup, or people who want to but are too nervous about other's opinions. Beauty shouldn't be stressful or nerve-wracking or fuel for self hatred.

What does "Extreme Beauty" mean to you?

I'm all for anybody who wants to break status quo and trade tidy monochrome winged eyeliner for a geometric color pop splash, wherever and however. But I am also for anybody who wants to maintain the status quo. Too often it's a battle of which is better, and that's where the fun stops and morphs into a competition. There's nothing beautiful about putting anyone down for what they like. Measure beauty by how happy you are with what you're doing. You're never too extreme or too plain so long as you enjoy yourself.

That's what beauty is all about: love and happiness. It might be kind of sappy to say that, but I live by it regardless. Everyone deserves to feel good about themselves and no one should be allowed to set any rules for how or why.