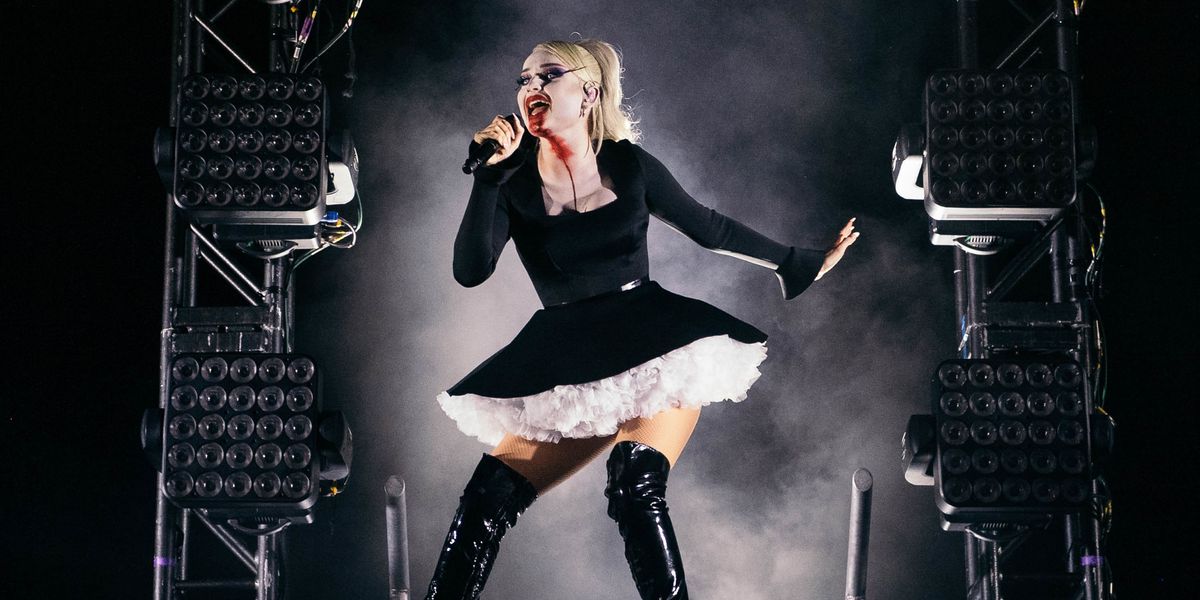 Between day-and-night studio sessions, a surprise Halloween track (appropriately named, "Party Till I Die"), a virtual performance for Marc Jacobs and a guest appearance on Jimmy Kimmel Live!, one thing is clear: Kim Petras is booked and busy.

Amid the hustle of recording her next album, Petras has partnered with Bubly Water on a drag-inspired Halloween video set to last year's freaky favorite, "Close Your Eyes," and took the house down with a few of NYC's favorite wig-snatchers, as part of the company's #DragForAllFlavors campaign. In between takes for her next record, Petras exited the studio for a few moments to tell PAPER about the nightlife-reminiscent Bubly campaign and her soon-to-be-released studio album.

"I just want to help wherever I can to keep nightlife alive, and this was the perfect opportunity to do so, with something that I care very much about," Petras said of the collaboration's origins. "For me, nightlife was always a source of hope and such a free place where anybody can be whatever the hell they want to be. I've been so inspired and I have benefited so much from nightlife. I mean, that's where my career started, in little clubs in New York."

Paying tribute to New York nightlife, the video itself features a multitude of bubbling drag queens, including Lagoona Bloo, Maxxx Pleasure, Zarria Powell, Rosé, Pixie Aventura, Tina Burner and Merrie Cherry, each lip-syncing to the sickening track in their own larger-than-life costume — just as they would on a Saturday night in Chelsea's Barracuda Bar or Brooklyn's 3 Dollar Bill in pre-pandemic times.

"They really served," Petras said. "I've met probably all of them in my crazy rampages in New York and they're all very incredible. I just feel blessed to be able to work with them. I have a ton of friends who are drag queens and some of my favorite people in the world are drag queens, so it was really great."

since i love and miss New York nightlife so much i partnered with @bublywater and some of my fav NYC Drag Artists to help SUPPORT through this pandemic. thank you bubly for showing up for LGBTQ+ creators all year long, your donation to @GLAAD and the #dragforallflavors campaign. boo-ah :) #bublypartner

In light of the shutdowns, Petras has traded in wild club nights for close-knit recording sessions, gripping onto her music-making process as a mental lifeline during these unprecedented times. "Music has really been my little light at the end of the tunnel during this time," she said. "When I'm making music with my friends, it's the best thing I can do to just take my mind off of things and to not feel the crazy anxiety of the world. I've been very blessed, but it's a very tragic time and it's fucked up."

Riding the high of her latest nightclub anthem, "Malibu," and last year's sold-out Clarity tour, Petras is more than determined to level up once more with her next release. "I'm in the studio every single day working on my album," she continued. "It's kind of my debut album. I consider Clarity more of a first taste, so I'm being really careful with everything and I'm really taking my time."

Petras was careful not to give to much away with respect to the album's details, but she did spare a few hints on what to expect: "It's very concept-driven and it sounds like nothing I've done before." Without giving a concrete release date, Petras confirmed that she is "very deep" in the tracklist's production, so it's safe to assume her new project is arriving shortly. Do with that what you will.