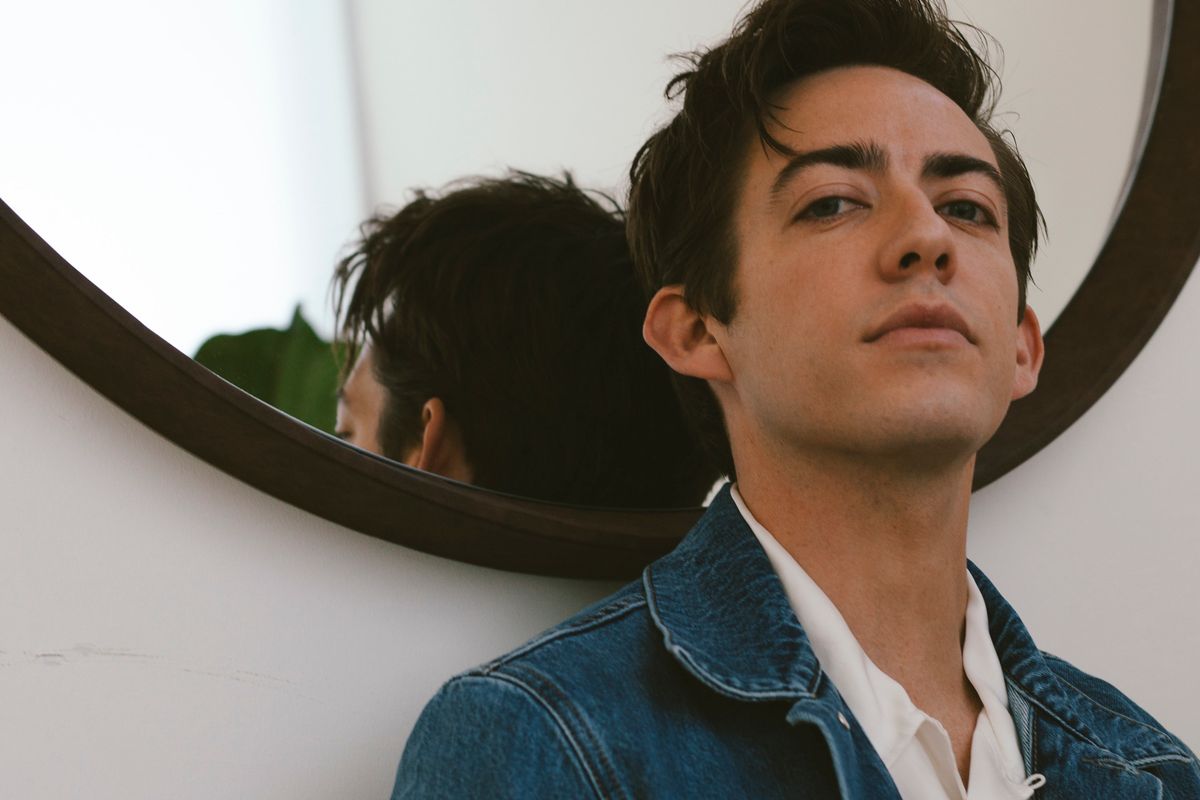 For a long time, Kevin McHale was Artie Abrams. Artie is the shy, wheelchair-bound, bow-tied jazz ensemble/A.V. club nerd of Glee: the iconic musical sitcom, which applied fairly radical honesty to the lives of a misfit choir of high school stereotypes (though it was sometimes ambivalent on the ultimate question of reinscribing or defying those tropes). Artie was one of the stronger characters in its mixed bag. He was awkward and mumbling, but clever and compassionate, with a lethal deadpan sense of humor. It would have been easy for him to be the show's moral compass, full of zingers and life lessons — a punching bag-cum-spirit guide who helps the popular, able kids self-actualize — a role marginalized characters often fill on TV. But Artie, under McHale's supervision, made mistakes and grappled with ability, romance and ambition in complex ways.

To most people, McHale is still that sweatered teenage geek, even though he's now 30 years old, a successful TV actor, in a happy relationship with his boyfriend, and occasionally posts photos like this on Instagram.

But McHale has no animosity towards his alter-ego. He's "indifferent" to being conflated with the character he spent the first half of his twenties playing, he explains over the phone. In his view, Artie gave him everything. "If nobody watched Glee, then we wouldn't have been able to do it for six years. I'm only in the position of getting to do what I want now, because people watched me and watched Glee."

McHale is preparing to release his first ever solo EP Boy on May 24th. It's a moment in his career, when you'd think he might. Resent the tall shadow over him cast by Artie and Glee, that is, as he attempts to stake his claim as an artist who sings his own songs, rather than Broadway and Top 40 covers on TV. But McHale simply isn't thinking about it on those terms. He isn't attempting to "reinvent" himself in this chapter, and his songs don't feel like it. Mainly — and the EP does reflect this — he's overjoyed with having figured out how to write songs that sound and feel like himself, for the first time.

"I spent so much time putting pressure on myself for no reason about, especially during the Glee years, the kind music I wanted to do and if I wanted to do music at all," he explains. Boy isn't your typical actor-tries-out-music project. McHale has been making music since his mid-teens, when he was one fourth of a late '00s, spiky-haired boy-band NLT: a line on his resumé he seems amused by now ("it was after NSYNC, before One Direction and nobody really wanted a boyband"). He quit NLT shortly after he was cast in Glee at 21.

"[Glee] was a gigantic playground."

Over the course of Glee's six years on-air (it released singles with each week's episode), McHale and company put out 16 albums (including three number ones) and hundreds of charting tracks (including his tender solo rendition of Billy Idol's "Dancing With Myself"). "It was a gigantic playground," he reflects, on getting to sing everything from Katy Perry to Stevie Wonder under Artie's name. "We really got to play with these songs and have fun with them... and not really be judged if I suck at rapping or I'm doing a country song and I can't really pull it off."

But although, as he says, music's "in his blood," it's taken McHale over a decade in the industry to make sense of the kind of artist he wants to be. He attempted solo music with Glee's label Columbia Records while the show was airing, but was at a loss for what to say. "During the Glee days, when I doing music outside of it, I was always putting on a persona, or I felt like I had to." He shelved three albums because "they're really just not good." "People had me recording early Justin Bieber-sounding stuff, and I was like 'This doesn't feel like me at all.'" Plus, Glee was all-consuming. "It's only now, the first time living as an adult without a crazy 17-hour-per-day work schedule, that I've had the time to think about something else, and that's how this music came about."

Four years after the Glee's finale, McHale gushes about how good it feels to make music that feels genuine. He characterizes Boy as "having a conversation with my friends put to music," and describes "organic" hours in the studio "without any pressure," jamming with and sending demos back and forth between friends, including Glee's Amber Riley, Naya Rivera and Jenna Ushkowitz, who he remains close with.

Who is Kevin McHale as an artist? Over the EP's five tracks: remarkably vulnerable, neurotically introspective and playfully funny — as it's easy to imagine him among friends. "I'm an oversharer. I think I needed to be like that in my music for it to work." This is obvious from the first single, "Help Me Now," a funk guitar-driven R&B-pop number stacked with squiggly '80s synths, that McHale dropped on Friday, on which he mocks his own romantic neuroses. He "purges" all his irrational, "needy" thoughts ("You sure you still love me?" "Do you miss me?") but immediately acknowledges his embarrassment ("I hate it even more than you do"). "I wanted to analyze all the grossest parts of myself... those irrational fears that come up and make you say 'Why the hell am I acting like that?'"

His is a rare combination of self-possession and pop hedonism, which, overall sounds a little bit like if Justin Timberlake had Troye Sivan's sensitivity, with a dose of Lorde's introspection. On his clean R&B-pop hybrid: "I think intrinsically, no matter what, pop music was going to happen." It makes sense that pop would be his language, given McHale's early diet of TLC, NSYNC and Britney, as well as his years on Glee, a show that was fueled by pop's emotive power.

Even as McHale's lyrics are sharp, he's also relaxed, flirtatious and confident, in a way that'll be striking for anyone who associates his agile voice with Artie. On "James Dean" and "All I Want Is You," he's conjures late-night euphoria and the rush of attraction ("Let your roommate know/ that you're not coming home tonight"). But he never loses his 30-year-old's self-awareness (the original title of the former was "Thrift Store James Dean"). He applies the same emotional intelligence to a sepia-toned memory of a road trip on "Arizona." While he hopes people will see a new side to him, he thinks performing the labyrinthian calculations to imagine if people might read his sensuality and confidence on the EP as a deliberate, staged pivot from the nerd he played on TV "drains all of the creativity and point of doing it in the first place."

"I think intrinsically, no matter what, pop music was going to happen."

He's also decided not to worry if people read into "Younger:" an ode to first love in the Taylor-Swift storybook style. It's the fable of his first boyfriend, who he met when he was 19, dated for nearly eight years, and still calls his "best friend." The song is overflowing with the fleshy indignities of young love, like a getting carded to see Superbad on a first date — and the anxieties of adolescent queerness, like not being sure if it was a date at all and playing romantic chicken ("I called you up like 'bro, no homo'/ what you doing now?"). He reflects from 10 years out on what might have been: "We could have done white picket fences and have been fine... We were once the whole wide world to one another/ And now we wake up wondering how we lost each other."

The reason McHale has to worry (about not worrying) is because he technically "came out" in April, and it occurred to him that people might read the timing as a strategy to promote his music. Except that he didn't mean to come out, and "Younger" was already written when he sent the tweet that's been dubbed his "coming out."

After he hit send, a small tidal wave of "Kevin McHale Opens Up About His Sexuality"-style stories were published. McHale had no idea his casual gay humor would be taken as an announcement, having assumed he was no longer living in a time when he had to come out. It humbled him: "I realized, 'OK, maybe there is a need for people to still come out.' This is still a really big deal to a lot of people and it should be, because there's a lot of people who don't to live in an environment like I do."

But he was uneasy about the implications of the influx of attention. "Me, someone who's not relevant, and hasn't been doing anything visible, that a simple tweet about something like that can be taken and used in a number of different ways. It made me think, 'Oh. We're not there yet,'" he reflects. Because the media sometimes sees identity as a commodity, McHale feels the need to emphasize that he doesn't: "I'm not sitting over here plotting like, 'OK, now that this has happened, I'm going to write a bunch of queer-sounding songs.'"

McHale's sincerity is evident in the vivid detail and honesty of Boy and especially "Younger." A "healthy long-term relationship that didn't work out because both parties grew up, but they still go on vacation together" isn't exactly one of the soap opera-ready queer romance clichés found in pop culture's sparse offerings (where both partners rarely make it to the end of the story alive, let alone struggle with the banality of adult compromise). But McHale wanted to honor the idiosyncrasies of his first love: "There were nuances and complexities just like in any other type of relationship. I think a lot of times we don't get to see that. This was a really complex relationship and it happens to be a queer relationship... I just wanted to try and capture all of that complicatedness."

After hearing Boy, it's unsurprising that McHale names Frank Ocean when I ask about queer artists whose music spoke to him early on. "Hearing someone who was so cool — and considered so cool — and he's singing about a dude playing football. You're just like, 'Holy shit.' I want to see this movie. This is my favorite artist. I was so starved for that growing up, for someone who's so unabashedly talking about relationships with guys, analyzing all the conflicts and romanticism." McHale will be happy if his songs add even a bit of detail to that canon.

It's fitting that as McHale finds his voice, once again, it's in a choir. Instead of the dork in a high school glee club, this time, he's a member of a movement of queer artists using pop music as a language to tell the truth about how it feels to be them. He's grateful for the company. "Nowadays, it's incredible how much more common it is for queer artists to be successful and find a real audience. We're finding the artists that we've wanted for so long."

Bobby Shmurda Is Out of Prison