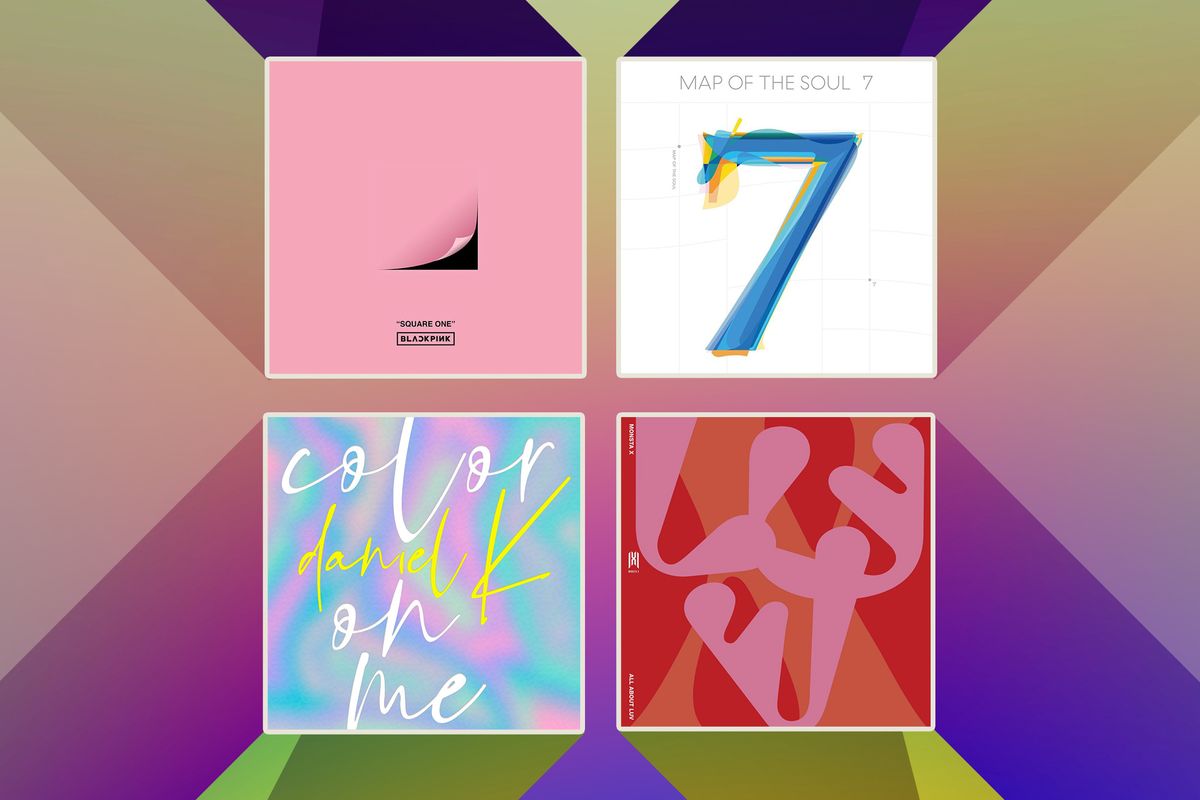 Become a K-Pop Expert While You're Quarantined

As quarantine and social-distancing measures continue around the world due to the COVID-19 pandemic, everyone's suddenly on the lookout for a new hobby to distract themselves with. If you're not one of the millions of fans already obsessed, might we suggest getting into the world's most popular music scene: K-pop.

Thanks to acts like BTS and BLACKPINK, Korean artists have made major inroads into international markets of late, and gained notice from the likes of Lady Gaga, Lil Nas X and Nicki Minaj. If you've peeped a K-pop video pop across your YouTube feed and want to know more, we're here to help you catch up. There's a lot to learn about K-pop — it's the perfect quarantine pop culture deep dive.

While we'd be remiss to say you'll fool even the biggest K-pop stans into thinking you're an expert after reading it, here's an up-to-date rundown on K-pop's past and present, including its recent viral moments and best emerging acts.

While South Korea had no doubt been creating "pop" music for years, the genre-bending world of K-pop we know today originated in the early '90s. A trio named Seo Taiji and Boys became sensations in Korea with their never-before-attempted blend of music influenced by American trends that brought the sounds of hip-hop and New Jack Swing into the country with the song "I Know." The group's influence has been recognized by K-pop artists throughout the years, as when BTS paid tribute to Seo Taiji with a cover of the track "Come Back Home."

The trio lead the way for attractive boy bands, girl groups and other idols who could deliver a range of sounds, dance and other skills to become new-age, hybrid pop stars. From the late '90s onwards, record labels in Korea have become entertainment hubs for molding and delivering generations of acts that look to continuously blaze new paths for greater future takeover in the global music scene.

King BTS: At this point, you know BTS. Their dominance in the Korean-music scene is truly unlike anything we've seen before. With the February release of their career-defining Map of the Soul: 7 album, the band not only topped charts across the world (earning the year's biggest sales week for an album in America to date) but broke records in Korea (no Korean album has ever sold as many physical copies as Map of the Soul: 7 has...ever).

Looking a bit outside of BTS' dominance, there are a few other factors we can use to assess the other big names on the scene.

NCT Kicks Into High Gear: While they've been around for almost four years, 2020 has been a banner year for boy band NCT 127 following the March release of their Neo Zone LP. It has, so far, earned them Korea's second-highest-selling album behind BTS and hit the Top 5 of the Billboard 200 albums charts. Lead single "Kick It!" showcases their edgy, experimental side.

A Blooming Girl Group: Following up next in the best-sellers line is IZ*ONE, a 12-member Korean-Japanese girl group that garnered a massive following after they were created on a K-pop singing-competition reality show. "Fiesta" from their Bloom*Iz album, currently Korea's third-best-selling record, encapsulates the explosive vibrance of the act.

A Colorful Soloist: K-pop isn't only just about the groups. Solo superstar Kang Daniel has Korea's fourth-best-selling album to date. The singer-songwriter also gained initial fame through a singing-competition reality show and broke out on his own last year with a massive fanbase supporting him. His Cyan album and its single "2U" delivers the refreshing kind of synth-pop goodness we all need right now.

Other important acts for your education:

Seventeen: the 13-member boy band with 2019's biggest album sales behind BTS thanks to the wide-ranging sounds showcased in tracks like "Hit" and "Fear".

TWICE: another mega-selling girl group who have a concert documentary with YouTube Originals coming out this month.

Monsta X: A boy band who represents K-pop's rougher and sexy side but also how the scene is growing internationally with its rare all-English album.

SuperM: a K-pop boy band "supergroup" made up of members from four other top groups that earned at No. 1 album in America last year and continued their takeover with more concerts and TV appearances.

Here are the big news stories that will get you up to speed with contemporary K-pop.

Of Course, BTS: BTS is leading the YouTube game this year with two music videos to their single "On" boasting huge numbers. First up, the "Kinetic Manifesto Film : Come Prima" version of "On" showcased the song's powerful choreography (with more than 160 million views at press time) and was followed up with one of the year's most cinematic storylines and visuals in its official music video (with more than 120 million views so far).

Not to mention the guys performed it after shutting down New York City's iconic Grand Central Station on The Tonight Show With Jimmy Fallon. The only one who can outdo BTS is BTS.

Don't Sleep on EVERGLOW: After just over a year in the industry, EVERGLOW has become a favorite of international fans, landing their "Dun Dun" music video more than 110 million clicks so far. While EVERGLOW is waiting for a larger breakout moment in Korea, you'd be wise to be up to date on these girls before they blow up bigtime.

Lisa Makes Us Hungry for More BLACKPINK: While we're getting desperate waiting for new music from BLACKPINK ("Kill This Love" was PAPER's No. 1 favorite song last year), the group's standout dancer has been blessing us with content on her YouTube channel. Most recently, the star delivered a stunning dance video that showcases not only her mind-boggling flexibility, but also her ability for incredible improvisation. Get hypnotized to her routine to QUIN and 6LACK's "Mushroom Chocolate":

Thrusting Into ATEEZ: Rising boy band ATEEZ has become one to watch since their debut in late 2018 and their latest single "Answer" continues to make good on their promise for K-pop greatness. While the track showcases some of the group's best harmony and vocal work to date, their choreographed hip thrusts on the chorus are almost as important.

(G)I-DLE's "OMG" Moment: With the release of "Oh My God," girl group (G)I-DLE had the world shook with such a stunning and conceptual video. Instead of giving any spoilers, we'll just leave the link right here:

(Shoulder) Lean Into ITZY: Another new K-pop girl group in ITZY is also breaking out for their must-see visuals. While the quintet's "Wannabe" video is a high-energy, self-empowerment anthem, one of its signature dance moves comes from member Ryujin and her now-viral shoulder dance that's had everyone form K-pop fans to RuPaul's Drag Race stars attempting to nail the fierce shimmy.

Bonus: ITZY performing "Wannabe" in costumes is a real treat, but most notable is Lia in a curious strawberry suit.

The Boyz serving K-pop star–warrior realness in this performance from the TV show Road to Kingdom.

Taeyeon absolutely slaying her Korean rendition of Frozen 2's "Into the Unknown".

You'll understand why people say "Stan LOONA" when you watch this live performance of their latest single "So What".

What thousands of Reddit fans are calling an "impossible" hand illusion in the choreography to "Dumhdurum" with veteran girl group Apink.

On average, there was a new K-pop act debuting every two days or so last year. Even in just four months in, 2020 has brought some impressive groups that are snatching supporters quickly. Become fans of them now and you'll be able to brag you were into them before everyone else.

MCND: With a hip-hop sound that international fans tend to favor, MCND is a quickly rising act that's becoming known for writing their own material and impressive dance covers.

Cravity: Considered to be a little brother group of international breakouts Monsta X, this nine-member boy band is already selling a large number of albums in Korea. Will America follow the trend?

Cignature: This year has been quieter when it comes to new girl groups, but Cignature has already captured our hearts with the disco-pop perfection that is "Assa."

TOO: Created on a reality show singing competition, this promising boy band is delivering high-quality content in their music videos and with loads of content for fans on social media that's increasingly going viral.

How to Keep Up With K-Pop?

Now you've got the background knowledge, it's time to tune in to the daily grind. While the K-pop scene moves fast, there are some constants you can always look forward to that should keep you properly updated.

Every week, acts will perform on Korean "music program" shows that feature live performances from all those who are currently promoting until a "No. 1" of the week is named—think of it a bit like a live TRL countdown. Looking out for the new uploads from the YouTube channels for Inkigayo (which airs on Sunday and uploads their performances that day), The Show (which airs Tuesday), Show Champion (Wednesday), M Countdown (Thursday), Music Bank (Friday) and Music Core (Saturday) will ensure you're seeing the latest music and never missing your favorites.

Keeping tabs on streaming services with dedicated K-pop playlists like Apple Music, Spotify and TIDAL will also make sure you're being served the best in new music.

But perhaps the easiest thing you can do is just be a fan. Whether it's buying an album, saying hi to them on Twitter or watching their video on YouTube, supporting your favorite artists is more crucial than ever when it's more difficult for artists to promote in the time of coronavirus. Especially in such a fast-paced industry like K-pop, letting your favorites know you're there for them is so important.