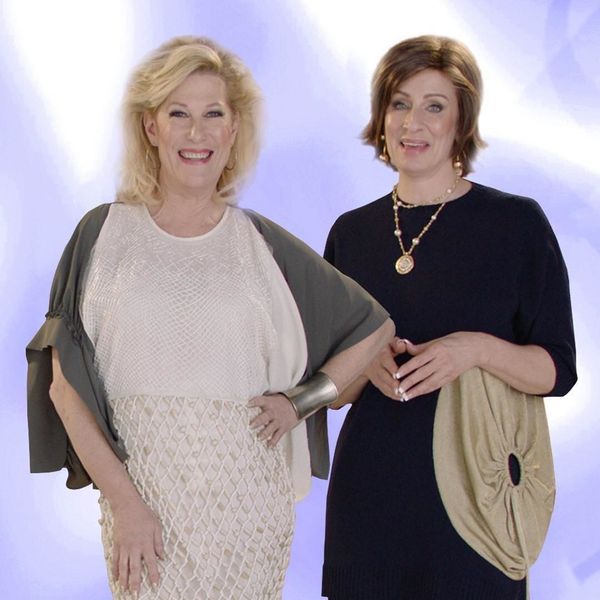 When I was a wee baby queerling, one of my favorite things to do with my grandmother was to watch the Home Shopping Network and QVC. I always dreamt of calling in and gabbing with one of the permanently '80s-glam infomercial hosts about how I simply couldn't find this exclusive set of cat-faced doilies or that floral-printed caftan anywhere in stores for a reasonable price! Here is where to find the deals.

Upholding the cheeky, kitschy legacy of those sorts of shows, typically marketed to bored housewives across America, is London luxury label JW Anderson. Today, they launched the first installment of a new social media campaign series called JWA-TV. The series will have three editions, featuring the brand's Keyts, Anchor Logo and Bike handbags, in that order.

It is only right that for JWA-TV to be an appropriate parody of teleshopping programs, JW Anderson casts a range of characters who can be in on the joke. Celebrity host Sandie Stone and legendary performance artist Justin Vivian Bond aka Mx Viv play themselves, as campy and awestruck about fashion as can be. And performer Jill Pangallo and actual QVC talent Amber play the roles of "Joyce Nawman" and "Staci D," that latter of which I may or may not adopt as my performance moniker when I become a pop star.

Anywho, it's all pretty funny, irreverent stuff, what with a delirious pastel color scheme and airy wide shots of Mx Viv posed with the candy-coated Keyts bag as the Really Great Price flashes on the screen surreptitiously with the JW Anderson logo. In euros, of course.

A press release says that a chance happening brand creative director and founder Jonathan Anderson had with Mx Viv in San Francisco led to this collaboration, which is so on-the-nose and just the right amount of "off" it hurts. I won't spoil the dialogue for you, so enjoy the comedic timing of it all below, get yourself a Keyts bag, and reminisce, perhaps sadly, on the time Mariah Carey had to channel this very specific energy to sell her maternity wear on television.