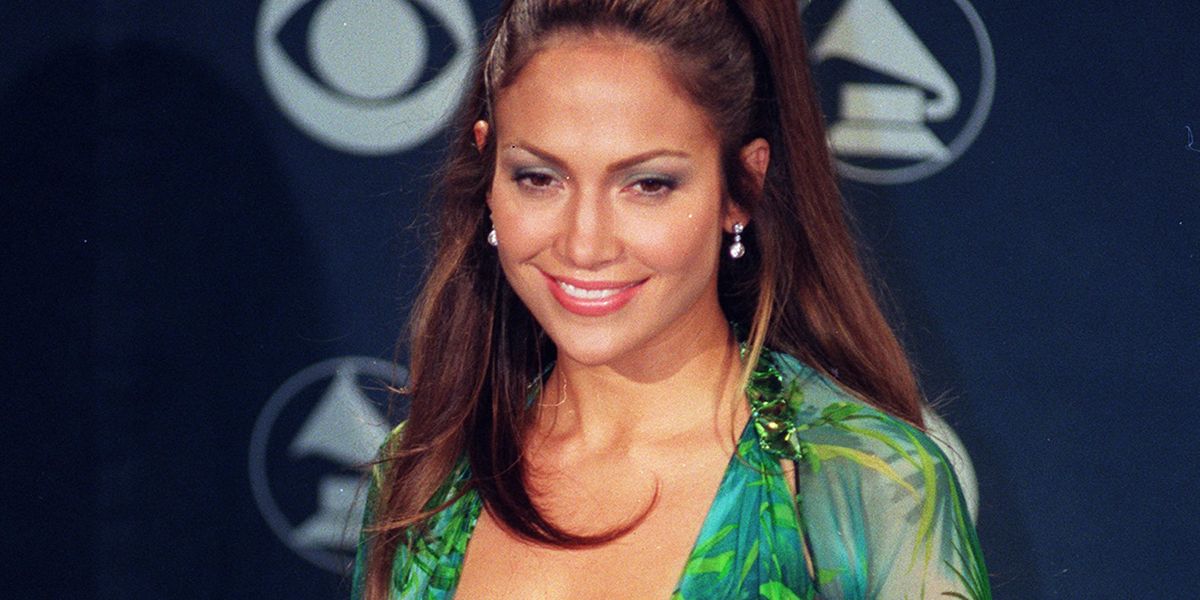 "Enough!" Taylor Armstrong snaps at the infamous dinner party from hell in the first season of The Real Housewives of Beverly Hills. That's how many are feeling these days about Jennifer Lopez's green Versace dress, which is running a prolonged, borderline exhausting victory lap in celebration of its 20-year anniversary.

"I'm so tired of JLo and that rainforest cafe dress," one tweet read last week to the tune of nearly 100K 'likes.' A Change.org petition, "Stop Jennifer Lopez and that Green Dress," has received thousands of signatures and went viral when shared on Twitter. "We are tired and her terrorism needs to stop," the description reads.

Few dresses have permeated the zeitgeist like the plunge-front tropical green floral chiffon gown that Lopez wore in attendance at the 2000 Grammy Awards. Famously, it helped invent Google Image Search. "At the time, it was the most popular search query we had ever seen," former Google CEO and executive chairman Eric Schmidt wrote in 2015. "But we had no surefire way of getting users exactly what they wanted: J.­Lo wearing that dress. Google Image Search was born."

The dress was not new — having debuted on Versace's SS00 runway then been worn by Donatella herself to the Met Gala in December 1999, followed by Geri Halliwell at France's NRJ Music Awards — but Lopez's rising star energized it into ubiquity. "I thought it was gonna really change the game as far as for her and fashion," Lopez's boyfriend at the time, Diddy, recounted when looking back at the dress in a 2017 interview. He was, of course, right. If the dress's legend has been tarnished over the last few months, don't blame The Block's preeminent Jenny!

Donatella Versace at the 1999 Met Gala

"I think the brand is the only one to blame here," says José Criales-Unzueta, a fashion and culture commentator (and must-follow on Instagram). "I find it interesting — and a bit sad — that the incessant marketing push from Versace to continue to cash economically and culturally from this dress managed to reshape its legacy from an iconic fashion and pop culture moment to an internet meme and inside joke." This speaks to how the industry is struggling at large. "It's really telling of how desperate brands currently are to create these impactful and viral moments to gain some positive brand rep or even sales. In the end, only Versace can be to blame for diluting the wonderful moment that was once this dress into nothing more than a marketing stunt. The even sadder part is that I think most of us understand why they did it, it really was an obvious strategy, I just really wish they would have left it alone."

But leave it alone they will not. It all began again last September. "J.Lo shuts down fashion week in iconic green dress" read headlines after Lopez closed out Versace's Spring 2020 show wearing a modified version of the dress. Versace even went as far as to use the print throughout multiple looks in the collection and to focus their campaign around the print.

J.Lo on the Spring 2020 Versace runway at Milan Fashion Week

"We aren't worthy!!" cooed Cosmopolitan after the modified dress returned three months later during Lopez's appearance on Saturday Night Live. A month later, in January, the performer was talking about it, the original dress, once again in a Vanity Fair profile: "The first time I wore it, I actually didn't have another dress. Usually I have choices. It was a last-minute thing that caused a sensation that was unexpected." This was confirmed by stylist Andrea Lieberman in an Instagram caption from September 2019: "I was driving down 5th Ave and saw that green dress in the window after a few calls later that night it was in my hands on the way to a fitting in LA," she recalled.

Related | The Rise and Rise of Fashion Archive Instagram

Let's record scratch, freeze frame there. Because I think it's in that detail that the crux of our story lies. This synergistic moment of fashion dovetailing with pop culture was not orchestrated by Versace, but rather through serendipity. Unlike, say, the 2015 or 2019 Met Galas, where Lopez showed up in Versace in partnership between star and house, the 2000 Grammy dress was fate. Had Lieberman not looked out the window at that very moment during a routine drive down 5th Avenue, the dress Lopez would have worn might have been as unmemorable as her Hustlers red carpets.

J.Lo and Diddy at the 2000 Grammy Awards

So what sparked this year's third resurgence of the viral dress? A tweet, of course. "Throwback to this unforgettable catwalk one year ago!" Lopez tweeted on September 20, along with a video of her runway walk. Folks were pressed. But what many fail to realize (outside of the fact that she hadn't publicly mentioned the dress in eight months and the last time she had, in the VF profile, was because she was asked) is that this moment in time is less about the dress, and more about Lopez's ascension into a higher stratosphere of fame.

"It's important to note that this is a Latina reaching all of this success," Criales-Unzueta says. "Latinx women in the film and music industries have always been pigeonholed in the same categories of sexy, sultry, and passionate, always receiving the same roles and being styled the same way. But somehow J.Lo was leading romantic comedies and was simultaneously on top of the music charts and people were looking at her because she was the woman to talk about." Criales-Unzueta effectively argues that the dress itself does not deserve the legacy, but the wearer does. "In the end, it's really just 'a piece of fabric.' This moment would not have come to be if it weren't because it happened at this specific turning point in her career. This has always been about her and never about the dress."

So what to do? Leave it alone. Maybe 30 years from now, when Lopez starts collecting her lifetime achievement awards, we can revisit the moment and smirk. "Ah, yes, that was history," we'll say in the same breath that we celebrate her 1998 Golden Globes dress. But until then, let's all agree to sunset the green Versace dress's omnipresence — or at least cut the discourse, deadass.

We began with a Real Housewives of Beverly Hills quote, so why not go out on one? As the great friend-of Sutton Stracke once said: "You've had your fun, now let the mouse go."