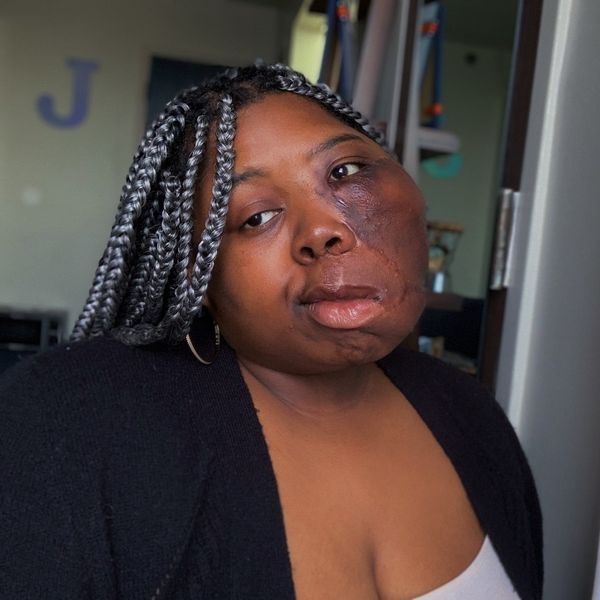 What Happens When You Unintentionally Become a Meme

It's every Internet user's worst nightmare: to log onto Facebook, Twitter, or Reddit and see your own face staring back at you underneath a sardonic caption. Nineteen-year-old Jazmine Stabler knows about this all too well. A student at Auburn University, she was born with a facial tumor and has had nine surgeries in attempt to remove it. However, in 2014, she finally got to a point where she decided she was content with her appearance and opted to stop trying to get rid of it.

"I've always been very confident in my appearance, that's how I was just raised," she says, before admitting that it took a while to get to that point. And while she's quite happy with herself at the moment, earlier this month, that was briefly derailed after a tweet using her old prom photos went viral on Twitter alongside the caption, "IGNORE YOU WILL HAVE 10 YEARS OF BADLUCK."

"Why post me? I'm just over here in Alabama living my best life, attending college, minding my own business," Stabler says, pointing out that her response has since gained even more traction that the initial tweet. "Talk about people who need to be posted about. Don't worry about me!"

Unfortunately though, trolls using her happy moments for clout is nothing new to her. According to her, those same prom pictures first went viral last April — and, again, it was thanks to a stranger on Twitter who stole her photos. It didn't stop there, as Stabler says she noticed the exact same meme — using her photos — appearing on Facebook in December. And though she "squashed it then," she didn't expect it to keep popping up, especially in the same, tired joke format.

"People tend to bash what they don't understand," she says, before putting things in a more positive light. "My pic went viral and I've been dealing with that, but there's also so much love pouring in. It outweighs the bad."

That said, as bullying expert Dr. Scott Poland points out, this sort of online behavior is difficult to pursue any sort of legal or criminal action against, though he believes various social platforms have begun to improve their ability to take action when complaints of cyberbullying pop up. Unfortunately, that tends to only curb the phenomenon on one platform, which then leads to the spread of the meme onto other social media sites.

"People tend to bash what they don't understand. My pic went viral and I've been dealing with that, but there's also so much love pouring in. It outweighs the bad."

"The Internet makes it not able to get away from," Dr. Poland says, before explaining that social networks make even a move across the country "not necessarily a fresh start" for victims of cyberbullying — an unprecedented change from bullying in the past.

As demonstrated by Stabler though, there's thankfully one way to counteract the hate in an effective way. "I'm very active on Twitter, but I guess they thought I didn't have one, and I wasn't going to see it and stand up for myself," Stabler says before explaining that her response kicked off a flurry of positive support that has ended up dwarfing the initial reaction to the other meme.

Which brings up another interesting point. In the few years or so, celebrity-based memes (though those are also sometimes unnecessarily cruel) have begun to take over a space previously dominated by memes utilizing photos of everyday people who aren't on Tik-Tok — after all, when was the last time you saw a Scumbag Steve meme? It appears that targeting unwitting, regular people as meme fodder seems to be a practice that's on its way out, and as Stabler theorizes, it's probably because everyone's on the Internet now. And what does that mean? An increased possibility of a call-out à la Stabler's clap-back.

"I feel like they didn't expect me to see it," she says. "Because people meme celebs all the time, but usually the celebs don't care." However, things are a lot different for everyday, regular people like herself, whose cyberbullying experience goes viral.

Obviously, people tend to this kind of thing mostly because they don't think they're going to get a reaction — but now that everyone seems to be on the Internet, maybe this is something that will become much less prevalent. After all, when there's accountability, there's less of a likelihood for damaging, toxic behavior to continue. But does this mean it will only work if the person whose photo is being used takes matters into their own hands?

Unfortunately, yes. As Dr. Poland says, "The more people that are online, the less likely somebody's going to stick up for the victim" — which means that people are less likely to rally against the perpetrator unless someone else has already paved the way, like Stabler herself. And that's an issue.

"It goes all the way back to early sociological research about Kitty Genovese in New York, who was screaming for help [as she was being murdered], because there were so many people who heard her," he says. "They all thought somebody else would get involved."

So what exactly can we do then? Well, it's complicated, but Dr. Poland does suggest that the real solutions are "going to have to come from the younger generation themselves." The takeaway? We need more galvanized reactions and continued call-outs of trollish posts. And hopefully, that won't just be left to the people being targeted in the first place.