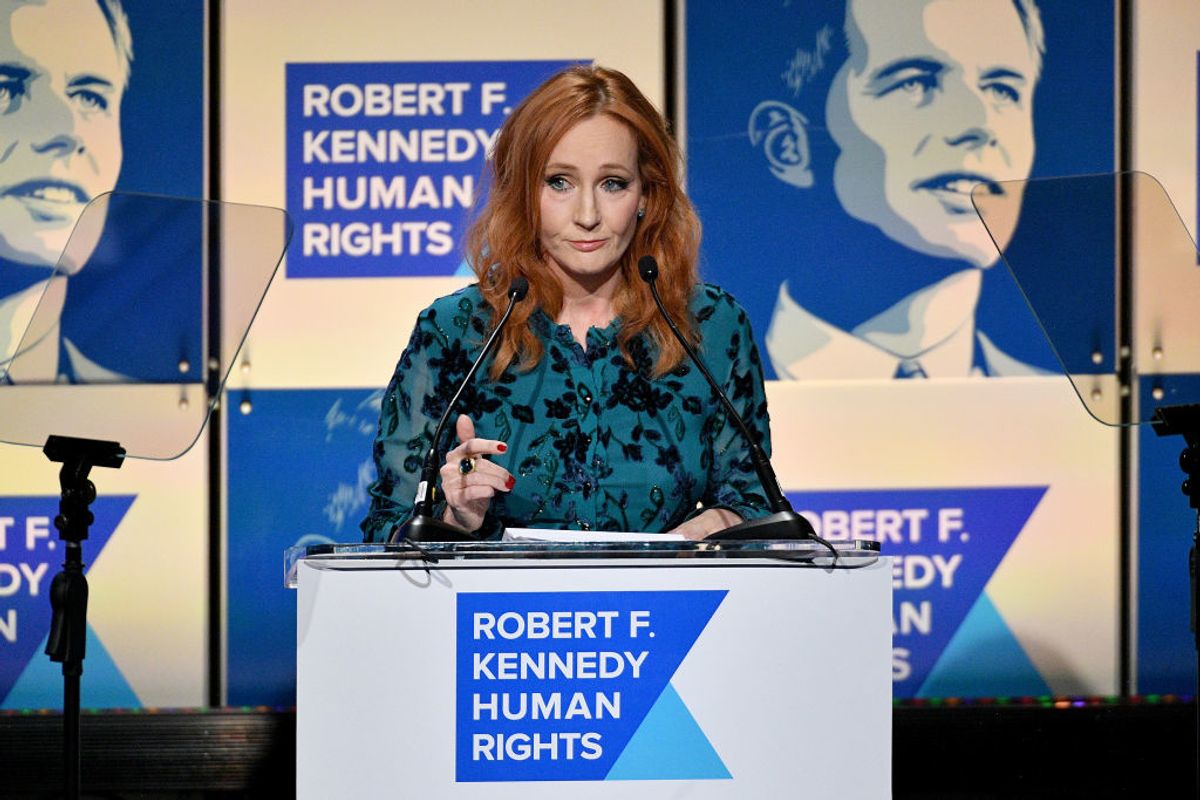 After facing massive backlash on Twitter this weekend for her comments minimizing the traumatic experiences of transgender people, J.K. Rowling has written a full-length essay for her website that many former fans are labeling outright transphobic. Accompanied with the caption "TERF wars" — a label she's incurred that stands for "Trans-Exclusionary Radical Feminist" — the essay echoes many harmful conservative viewpoints about "trans activism" and trans peoples' rights to use gendered bathrooms.

"When you throw open the doors of bathrooms and changing rooms to any man who believes or feels he's a woman – and, as I've said, gender confirmation certificates may now be granted without any need for surgery or hormones – then you open the door to any and all men who wish to come inside," Rowling writes in a particularly insensitive paragraph of the essay. "That is the simple truth."

It's not the simple truth, although it seems Rowling does not care much for dissent in this case, seeing as she's disabled replies to her tweet announcing the article's publishing to her self-titled website. The essay itself calls out trans activists for supporting a movement that Rowling believes is "doing demonstrable harm in seeking to erode 'woman' as a political and biological class and offering cover to predators like few before it," while attempting to also reiterate her support for "brave women and men, gay, straight and trans, who're standing up for freedom of speech and thought."

Rowling also comes out as a survivor of domestic abuse in the essay, writing that the experience "shapes my fears, my interests and my opinions."

Fans of the Harry Potter franchise began speaking out on Twitter this afternoon, denouncing the essay and many of the values Rowling wrote in support of. Popular YouTuber Eugene Lee Yang tweeted his disappointment, writing, "What's disheartening about JK Rowling's stance is that, at the heart of fantasy fiction, there's a delicate discovery of selfhood through magic." Many shared a similar sentiment to Yang's, finding Rowling's statements to not only be insensitive, but also antithetical to the messages in her books.

jk rowling is really using her platform to spread violent myths and lies to a minority group who's lives are consis… https://t.co/McBa1i3ETA
— indie (@indie)1591814842.0

At this point, anybody supporting J.K. Rowling’s platform is complicit in her transphobia. Sadly, her own identit… https://t.co/XorGgEpniT
— Raquel Willis (@Raquel Willis)1591814818.0