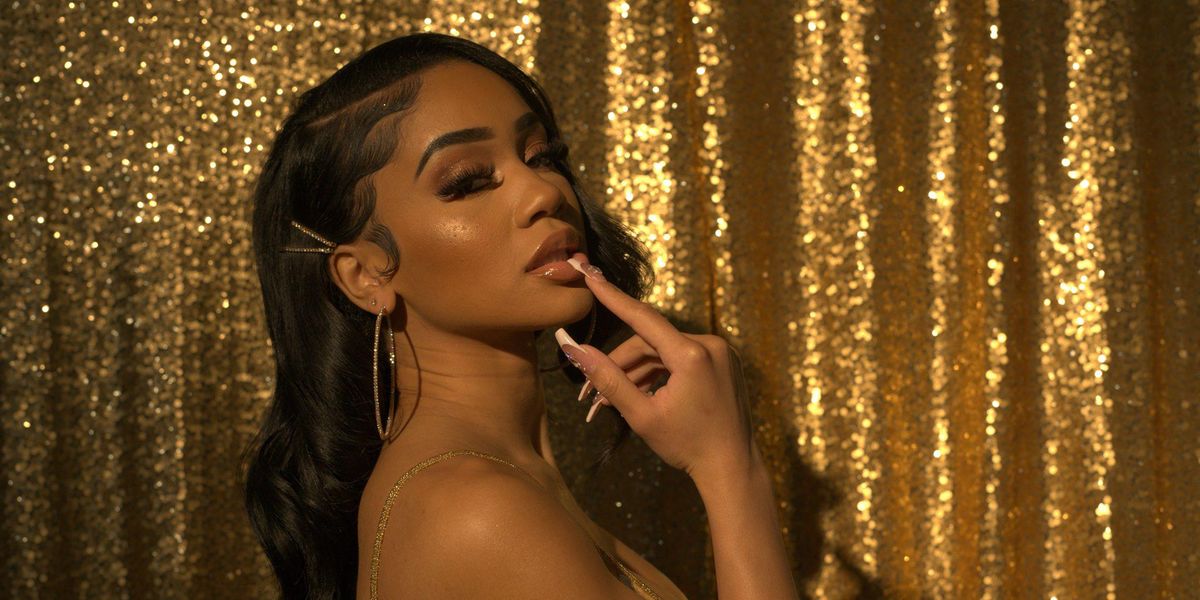 Saweetie and Timbaland Are Taking on 2021

With a smirk on her face, The Office's Michael Scott in deep thought on her t-shirt, and Mary Jane Girls' 1983 smash hit "All Night Long" blasting through her speakers while she dances, Saweetie gives an audience of 7,132 people the scoop on how to make her version of the McGangBang. It's McDonald's's most famous secret menu item that, for her, consists of a "fresh ass" Big Mac, a McChicken, fresh french fries, and sweet and sour dipping sauce all smashed together — a twist on the regular, widely purchased version of a McChicken between two Big Mac patties instead of the third slice of bread. As Instagram Live viewers gasp in horror in the comments, she smiles and pours sweet and sour sauce on the top of the bun and adds even more fries. After her speaker changes songs to the Isley Brothers' "Between The Sheets,'' her lips clamp between the buns and her eyes roll in ecstasy. Without missing a step, she goes back to dancing and continues to gulp down massive bites of her creation.

Speaking to PAPER about this McGangBang video from last summer, Saweetie explains the impact that it had for McDonald's, leading to the unofficial menu item trending for two days straight. Now, she's ready for the brand to give her her own meal. "I'm sure McDonald's saw it, and they need to hurry up and give a campaign before somebody else does," she says over the phone, in the kind of tone that suggests that she's half-serious.

Saweetie's McGangBang might make you gag, but it's indicative of the creativity and innovation that's driven her career so far. In 2017, the 26-year-old rapper went viral with "Icy Girl," in which she waxed poetic about her militaristic schedule for manicures and pedicures over the beat of Khia's 2002 hit single "My Neck, My Back (Lick It)." Hundreds of thousands of YouTube plays and millions of "ten white toes in them Tory flip-flops"' tweets later, she signed to Warner Records the following January and released her debut EP High Maintenance months after. She shot to the top of cultural conversation and remained there for quite some time. When she followed up with the Icy EP in 2019, she struck gold again by adding her own twist to a classic song with "My Type" which sampled Petey Pablo's 2003 hit song "Freek-a-Leek," hitting the Billboard Hot 200.

Saweetie's latest chapter unfolded with last year's "Tap In" that breathed new life into Too $hort's 2006 song "Blow the Whistle'' and has continued with "Back to the Streets," featuring Jhené Aiko, and "Best Friend," with Doja Cat. As we grow closer to the release of her inevitable debut album Pretty Bitch Music that she announced last year, Sweetie's growth is evident. Her songs are more polished, her lyrics are deeper, and she gets further into her experiences and worldview. And according to her, this is all by design as she continues to discover who she is. "I think my style has evolved into just a more enhanced and understanding version of me figuring out who I am as a woman and as an artist," she says. "Nothing has changed, it's just me talking about things that I've always talked about, but just a more grown, mature perspective."

"Back to the Streets" previews this matured outlook. With as much of an "I don't give a fuck" attitude that she can humanly muster at one time, Saweetie gets help from Aiko to explain just how useless that she thinks that men are. It's the kind of high-energy missile that would be a party starter if it weren't for the pandemic going on. Detailing its creation with legendary producer Timbaland, Saweetie says that they worked together last year during a bootcamp after spending some time communicating with his team.

"He gave me this 20-year-old, fresh energy and would have made me think that he was a brand new producer who was super talented," she says. "It took me by surprise because normally, when you work with people who've been in the game for a while to kind of be second in their era — but he was just so hip, then just fell on top of what was the hot town. So I'm so grateful for the opportunity because he definitely pushed me to challenge myself. A lot of people say that they cook in the studio," but he was literally cooking in the studio and it felt like that."

Now the song and its lyrics are frequently used across Twitter, Instagram, and TikTok — something that makes her happy because of how it's aging. "I saw it come at a perfect time," she says.

The second song from Pretty Bitch Music is "Best Friends," a track that was previously leaked by Warner Music Records in December, leading her to callout the label. While she's hesitant to speak on the situation, she does detail how the song came about last January with Doja Cat. "I really wanted to do something and release something that empowered my girl best friends,"she says. "I have a lot of dope women in my life and we all felt like we needed a record, And just going back to Destiny's Child, they had so many women-empowered anthem themes."

That's it for now of Pretty Bitch Music, but one thing's for sure: there could be more Timbaland on it. The producer tells PAPER Magazine he loved working with her on her forthcoming album. "She's a great person, and she's very intuitive about her career and her artistry," he says. "We did a lot of songs, so I don't know what songs she's going to put on the album, but I'm excited for it," he continues. "Whatever that body of work is, all the work we've done, I know it's going to be amazing. So I'm just curious to see how she keys her body of work together."

Saweetie was so excited by working with Timbaland for Pretty Bitch Music that she's ready to get back in the studio with him and potentially do even more, crediting her evolution as the spark for making even better music with him. "I think when me and Tim got together, I was trying to figure out who I was as a woman, as an artist," she says. "So I think we experimented a lot and while I think that it was great, I've got a lot to talk about now. "I'm interested in going back and starting from scratch to make even bigger songs with him. What we made sounds great, but I'm really excited to see what we can do now that I have figured out who I am."

Hearing her say this is heartwarming. With the beginning of her career defined by the image that she portrayed in her music, her understanding of self means that now she'll be able to further translate how she intersects with her music in an authentic manner. It makes Pretty Bitch Music one of the year's most anticipated albums and the chance for Saweetie to have that long-awaited introduction that defines who she is at her core. Let Saweetie tell it and she's already started doing it, starting with the album's name. "B.I.T.C.H. stands for bossy, independent, touch, CEO, and hyphy and I feel like those are the different areas that I focus on for this album," she says. And that's where the story starts. Where it goes, only Saweetie knows. "I like to have fun," she says. "I like to dress up. I also pop my shit, whether it's aggressive or melodic like in 'Back to the Streets.' That's when it gets a mature on this album, which is an enhanced, bigger perspective of who the 'ICY GRL' is."