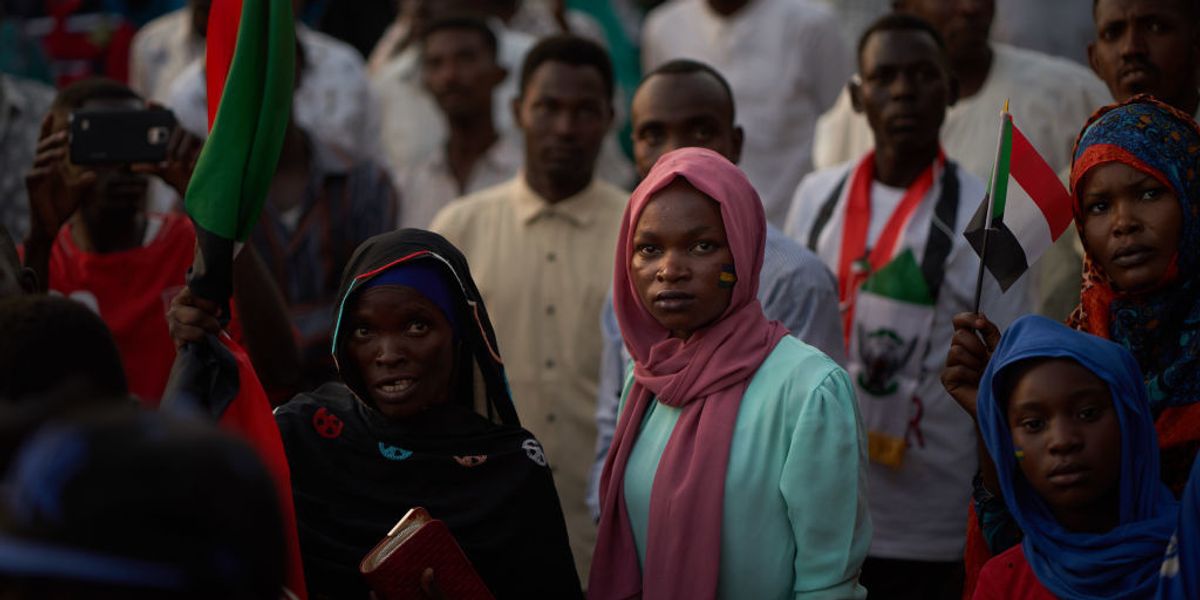 How to Help Sudan: A Country In Crisis

Omar al-Bashir has ruled the country for the last 30 years, despite indictments for war crimes and genocide in Darfur. During the protests, he was overthrown by Sudanese citizens who were tired of living in a dictatorship. Military forces intervened, at first claiming that they'd allow civilian rule and reportedly making a plan allowing power to shift between civilians and the military.

Eventually, those talks devolved into disagreements between the two factions. On one side is the pro-democracy movement, led by the Sudanese Professionals Association (SPA), who want civilian rule and an extended transition period to prepare for voting ahead of new elections. The other side, Sudan's military leaders, reportedly want voting to take place sooner rather than later — in nine months.

The civilians planned a strike against the military for not keeping its promises to form a more ideal transitional government. On June 3, a non-violent protest in Khartoum, Sudan's capital, prompted the military, called Rapid Support Forces, to respond with catastrophic violence. According to the World Health Organization, troops killed at least 52 peaceful protestors and injured over 700 more. Varying civilian reports have put the death toll of the June 3 attacks at over 100, claiming that dozens of bodies have been dumped into the Nile River.

As a way to prevent victims from reporting these incidents or to ask for help from the global community, the Sudanese military has shut down the internet nationwide. Various reports of atrocities committed by the military on civilians have already leaked, including violent rapes of women and men (so far, more than 70 cases have been reported by doctors), shooting into houses, burning and urinating on bodies, throwing them into the Nile River, and making people drink sewage water. Sudanese, New York-based beauty influencer known online as Had You At Salaam has posted numerous accounts of terrorism in her Instagram Stories and shared her own devastating account of a close friend's recent murder by Rapid Support Forces after being missing for four days.

On June 5, the SPA released a press statement calling for "complete civil disobedience and open political strike" against the "extremism and terrorism" taking root in Sudan, as a means to prevent the eruption of the country into "total chaos."

The statement reads in part: "In just two days, Khartoum and other cities in Sudan have witnessed a good sample of life under the rule of the coup council: mass murders and extrajudicial killings by the army, security forces and paramilitary militias allied with them; pillaging of innocent civilians and their properties; sharp increase of victims of rape, assault and violence; terrorizing and beating people openly in the streets without discretion; forcing striking workers to work under threats on their lives or firing them without any due process; and other signs of a collapsing, extremely fragile state that will not only be vulnerable internally but also subject to external manipulation and exploitation at the highest level."

Related | Inside the Continued Crisis In Venezuela

It continues: "Our country will be lost, and then regret and sorrow will not help. The risks that the coup council took, for the sake of usurping complete power, undermine national peace and would, eventually, affect regional and international peace."

In light of the violence in Sudan, a new refugee crisis is forming as citizens attempt to escape from the country. George Clooney, who has worked in South Sudan relief efforts for years, recently wrote an essay in Politico putting pressure on American Congress to act to help the people of Sudan. Here is how you can help:

​Spread the word however possible online:

Only now are news organizations beginning to share about the current conflict engulfing Sudan in earnest. But you can make sure the word of what's happening on the ground continues to get out, especially since the country's internet has been cut.

Follow the account @sudanuprising.updates (and others like it) for firsthand information of what's happening in Sudan. Even if you personally find the violent content triggering, it is important to spread these messages everywhere possible online. International visibility of a crisis is near impossible to ignore, and puts pressure on the lawmakers who can intervene.

​Put pressure on lawmakers to act:

Call your Congress representative by dialing 202-224-3121, and provide your zip code. When connected, tell them you support helping the people of Sudan. Send Clooney's essay.

Use ResistBot: text Congress by sending the word RESIST to 50409, where you can then be connected to your elected officials and tell them to help the people of Sudan.

Sign this Change.org petition demanding that "The UN must investigate the 3rd of June human rights violations in Sudan by the Military." Sign here

​Give to nonprofit organizations providing Sudanese children and families with resources:

This entire conflict emerged from a desire by Sudanese citizens to receive the food and cash they were in dire need of. Help the groups who are aiming to ensure Sudan gets some of those basic needs met.

UNICEF is working to help children displaced by the conflict. Donate here.

Save the Children has worked in Sudan since 1984. Donate here

The International Rescue Committee has had people on the ground in Sudan since 1989 to combat malnutrition and help displaced families with food, shelter, and necessary survival resources. Donate here.

​Donate to campaigns working to fulfill the people of Sudan's medical needs:

This Facebook campaign is raising funds for food and medicine for those surviving the conflict in Sudan. Donate here.

This UK-based GoFundMe campaign claims to be working with a Sudanese group to bring emergency medical aid to Sudan. Donate here.

And this GoFundMe campaign is dedicated to providing medical support for the group of non-violent protesters waging a sit-in. Donate here

The account @unitedtohelp has a number of bank codes you can donate to provide medical supplies and support the families of those still protesting the Sudan military's coup. Go here.