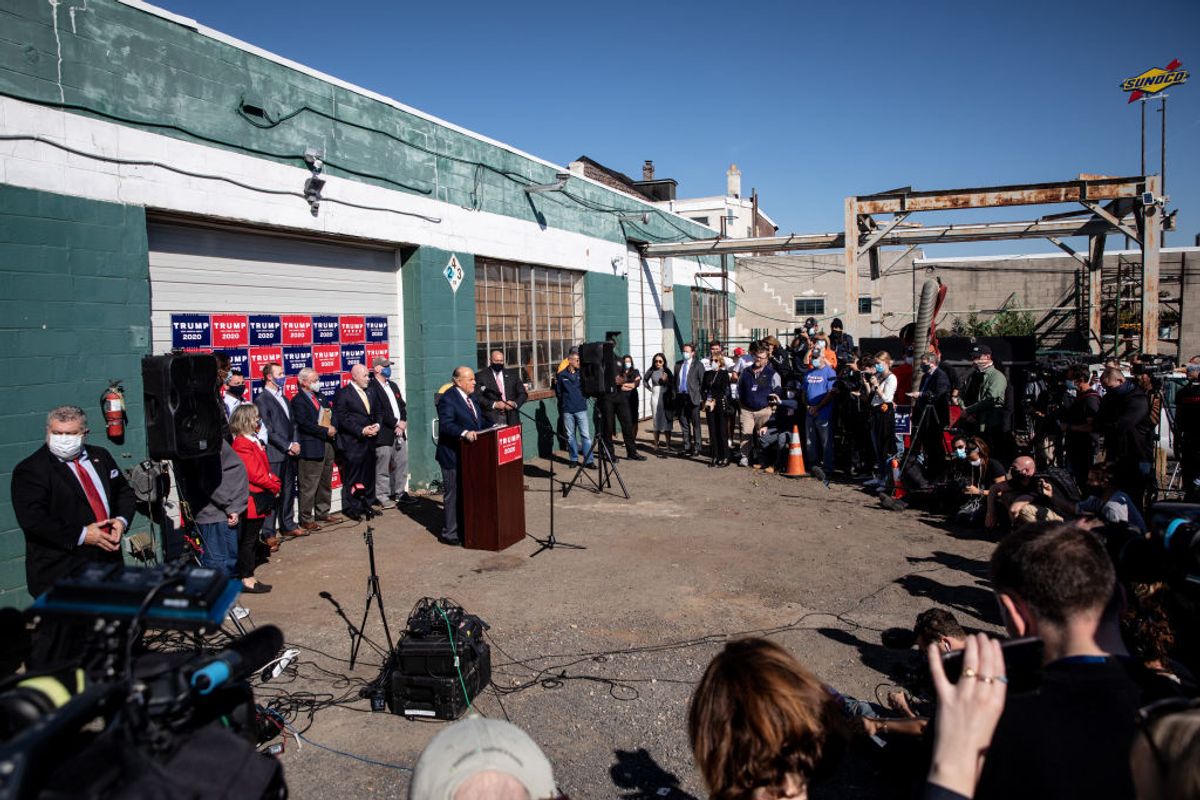 It might be the best slow burn news story of the year. Or... second best. On Saturday morning, just as America was being made aware that Biden had finally won enough electoral college votes to become president-elect, the Trump campaign was making a last-ditch attempt to sow confusion over the count with a catastrophic PR failure of Veep-style proportions.

No, it wasn't a joke. Rudy Giuliani really did hold a press conference at the Four Seasons Total Landscaping parking lot after Trump had mistakenly announced on Twitter that the event would take place at the somewhat fancier Four Seasons hotel in Philadelphia.

I could write jokes for 800 years and I'd never think of something funnier than Trump booking the Four Seasons for… https://t.co/HoNzSpDrlt
— Zack Bornstein (@Zack Bornstein)1604804994.0

Four Seasons Total Landscaping memes are now inescapable — it's been a good start to what's hopefully a more lighthearted internet era under Biden. We can laugh again! We really can.

I want to know who it was at the Four Seasons Landscaping that —answered the phone —heard that the Trump campaign… https://t.co/VVYhWKJsh8
— Josiah Hawthorne (@Josiah Hawthorne)1604783117.0

Don't let the naysayers stop you from sharing. Even after three days, Four Seasons memes are still extremely funny. The gloss of a Biden presidency will no doubt wear off almost immediately... but the image of Rudy haplessly bringing a convicted sex offender onstage to endorse a presidential candidate who has already lost will likely continue to be hilarious forever.

This is not over. For we shall mount our righteous stand at Four Seasons Total Landscaping. Next to Fantasy Island… https://t.co/3A7Yy14MAh
— Patton Oswalt (@Patton Oswalt)1604771223.0

No matter what happens from here -- and most of us are not laboring under the delusion that it's smooth sailing in… https://t.co/HZUchnrzkE
— Bill Corbett (@Bill Corbett)1604934565.0

Kudos to the 2020 writers for dropping in the Pfizer vaccine news a week after the election, and having Rudy Giulia… https://t.co/tGJrbvMAY3
— George Takei (@George Takei)1604930741.0

My favorite part of my first wedding at Four Seasons Total Landscape was when we cut the cake with a spade.
— Faith Salie (@Faith Salie)1604890395.0

I don’t mean to brag but I actually watched the live feed of the now infamous press conference at the Philadelphia… https://t.co/JalZQvTlQe
— Kathy Griffin (@Kathy Griffin)1604889724.0