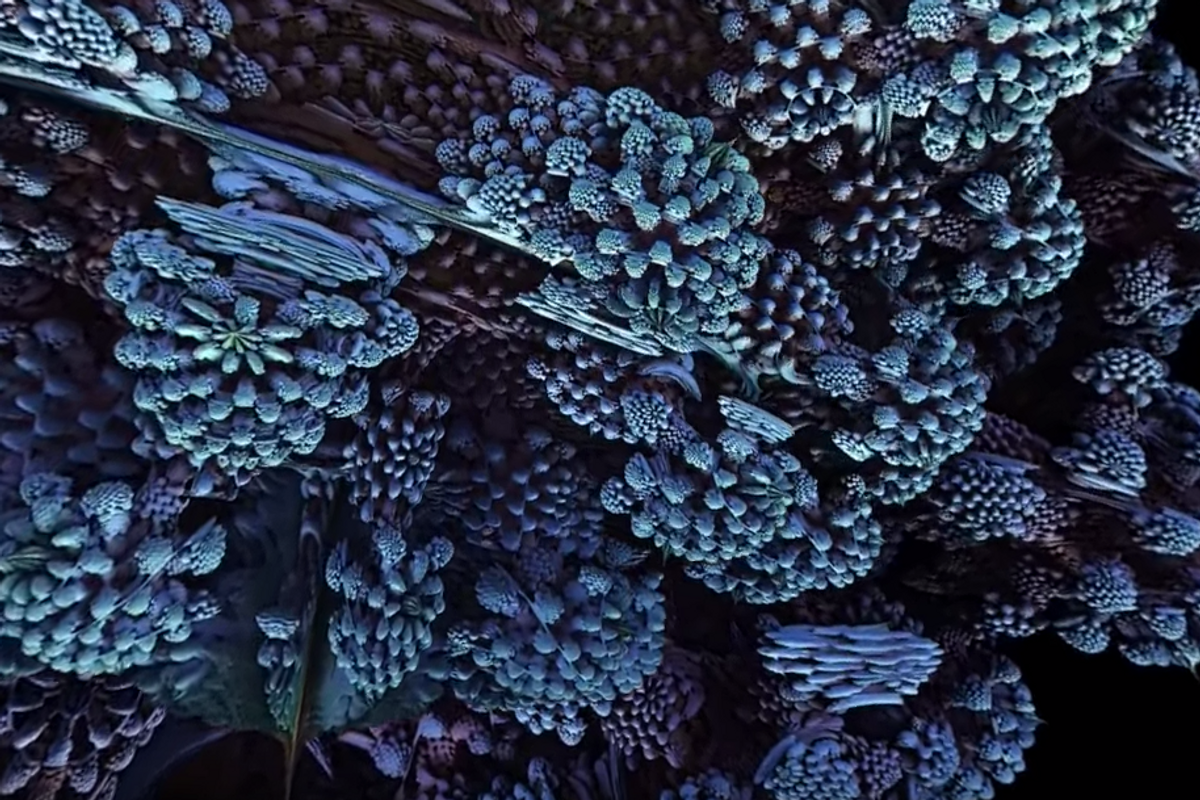 Technologically innovative installations are mainstays at major music festivals these days, often converging visuals and sound for staggering experiences. Maybe the most ambitious of these of late is Flatland: A Romance of Many Dimensions — an immersive reality film shown in a 120-foot, 360-degree theater via 20K projectors (12 of those top-quality machines, in fact), with 12-channel spatial audio delivering a soundtrack by none other than the brilliant St. Vincent.

Attendees at this year's Coachella and Panorama festivals got the chance to watch — or be wholly submerged in, rather — the work earlier this year, but today, PAPER exclusively premieres the film. Heads up before watching, though: You're in for a brain-bending six-and-a-half minutes.

Director Justin Bolognino was inspired by the 19th century sci-fi book, Flatland, a satire that critiqued Victorian society through examining its understanding of dimensionality.

"I went with a more earnest look at the realms beyond manifest form and into three metaphysical realities: TIMELAND, MINDLAND, and VOIDLAND," Bolognino says. "Our story is abstract, yet emotive, so it's more about going deeper into consciousness than pointing out the ills of society. My hope was in making this film, people would be turned onto the original."

A crew of Experience Directors — or xDirectors, as Bolognino also calls them — helped bring the film to fruition. To say Bolognino believes in these creators is a bit of an understatement: He's been championing them as "the next rock stars" since 2009, and his mission has survived the evolution of his two original companies through the acquisition and subsequent separation from a live entertainment company, through to now, with META: The Art of Being There acting as both the talent agency for those xDirectors and as their production company.

PAPER caught up with Bolognino to hear more about working with St. Vincent on the film, and also to learn more about its message. There's a lot to extract from Flatland; its potential for expanding your own understanding of the self and your environment is pretty vast, so the details you'll find in the interview are an ideal guidebook for watching. Check out the film and read on below.

Having noted Edwin Abbott Abbott's 1884 novella, Flatland, as a point of inspiration for the film, can you elaborate on that influence?

I've wanted to do something with Flatland since about 1999, when my philosophy mentor Kerry Dugan first exposed me to the story. The use of geometry to highly social constructs, especially around class and gender were so far ahead of their time, yet I never did have the right medium to tell the story. A full dome is quite literally the most perfect place to tell a story about geometry, depth, and dimension, so I jumped at the chance.

Rather than tell the original story, I decided to go deeper into the immersive medium by essentially writing a sequel that picks up in the next dimension beyond where Abbot left off, in Spaceland. Our story begins with the square emerging into sentient cube who then explores TIMELAND.

"A full dome is quite literally the most perfect place to tell a story about geometry, depth, and dimension."

What was it like working with St. Vincent (real name Annie Clark) on this? What kind of direction was given in soundtracking the journey through these dimensions? Or was she given free rein to interpret the film herself?

Where to begin? Annie is a freak of nature; a true Artist with a big capital A. She's also the most consummate, hard-working professional artist I've worked with. She received the timecode storyboards, which are the three acts broken down into three scenes each, for nine total movements. I provided a musical reference for each so she could have a clear listen to the intended vibe of each of the nine scenes.

She had one week to complete the first foundational work. I essentially just expected it to be a rough outline beat matched to the timecode and the boards. She literally delivered the first pass the day she left for tour, and it was an absolutely astounding first pass, as if she ripped the music straight from my head and heart. I expected a 30% completed piece, but instead got a nearly finished work. Everything perfectly synced to the timecode and fitting the boards like a true master. It was an amazing moment first listening to it along with the boards.

She asked me to be very open and honest with my feedback, and promised to deliver any changes I requested. Which, of course, she did in spades. It was an ego-less process from the jump, and not once did she event hint at complaining or pushing back on me.

Also huge shout-out to Christopher Willits, who took Annie's stems and mixed them down into 12 channels of ambisonic audio, and added some much-needed sound design in key parts of the film. The final score is a triumph, considering the amount of time and resources we had to make it happen. Really hope to be able to release the track on its own someday. It's extraordinary.

It's interesting how the cube transforms within the context of each dimension. Can you talk a bit more about how the cube is reacting to its environment?

At the start of the film, we're in the "Great Grid" of Flatland. There is no dimension. The Grid begins to extrude into Spaceland, where we then have the Birth of the Cube, falling onto the pile of long lost cubes. This Cube is different, however — it inhabits consciousness, and after stumbling around as a newborn, eventually rises up and passes through a door into TIMELAND. The Cube is ridged, with hard surfaces that bang into its environment — it can't yet interact with its surroundings. Within the Cube is a colorful, self-illumination, but it's trapped inside.

This culminates with the first Portal, where we find the Cube transforming itself yet again, thanks to the genius art direction of Dev Harlan. (Also of note, at the 2018 LAB at Panorama, we created a physical Portal to Flatland by artists Magenta Field. The portal is meant to transform you before you head into the dome).

Just after the Cube moves into the portal, it takes on a first-person perspective, and we now see it has become a pyritohedron. MINDLAND starts with the "geometry behind nature," emphasis on "behind." We see the skeletal forms as created by Sougwen and Prism, the art directors on this act. The Pyrito now has the ability to interact with and take on elements of its environment, namely the golden sphere that inhabits it, leading to an explosion of feathers, which now represents manifest nature. In the next scene, nature becomes abstract, as our world becomes fractal, establishing the next and final portal into VOIDLAND.

Art directed by Kamil Nawratil/VolvoxLAB, VOIDLAND finds the pyritohedron now becoming an "Anima," or "Soul" in Latin. The Anima is now free; it can literally take on any form it so chooses, and can melt into and out of its environment. We're now beyond space, beyond Time, and beyond Mind, and into the formless, ever-changing, ever-abstract Void.

The film resolves with a wash of pure ultra-violet, a color technically beyond the color spectrum, and intended to bathe you in gooey goodness. The idea here was to also bring in UV lights and blast the audience in blacklight, alas, we decided against it in the end but hope to pull it off someday!

Did you face any challenges in making this a reality inside the Dome? Was everything realized as you'd hoped?

The week leading up to Coachella brought major windstorms that did structural damage to our 120' dome. Opening day of Coachella was without a doubt the most tense and stressful production day of my career. We didn't get the show live until 9 p.m. that night, and I watched it for the first time in the dome once before we had to open doors to the public.

The audio mix was a disaster — again, shout to Willits who pulled an all-nighter while on family vacation to remix the audio. We did another few mixes for Panorama, where we finally nailed it and the audio and visual mix was a finely-tuned machine. Sadly in festival world, there's just no time and a lot of improvising. I look forward to continuing to dial in the show as we start putting it out into the world.