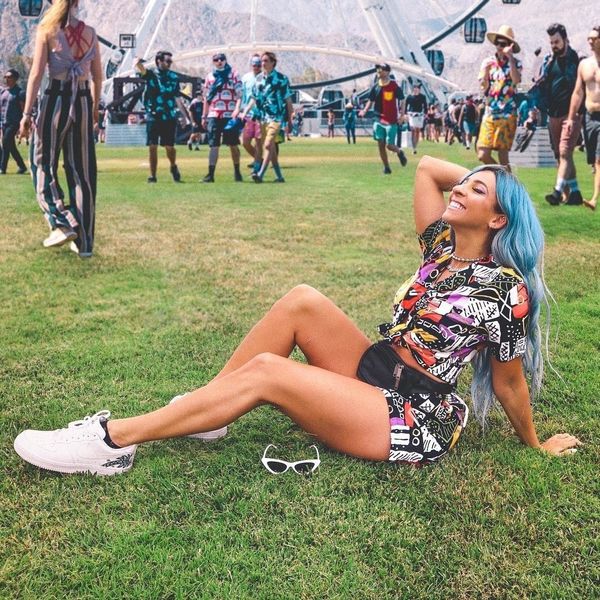 Most people are just going to Coachella for the gram, right? Right. Musician and YouTuber Gabbie Hanna has long been a critic of the festival for this very reason, so her followers were understandably confused when she started posting pictures in Indio this past weekend. Turns out all her photos were photoshopped — she faked the whole trip to prove a point about social media sharing.

Hanna detailed the whole experiment in a vlog uploaded yesterday, explaining that Coachella in general "feels like a lot of work for something you're not enjoying." So she decided to "get the best of both worlds" by getting her Coachella posts without paying for tickets or spending three days waiting for Ubers back and forth between her AirBnB and the main stage.

"I know people who double up their outfits on the first weekend and take photos so they can pretend to go to both weekends," she explained. "So what i'm doing is not that far from reality."

The influencer staged her Coachella photos at a friend's house (emulating a chic AirBnB), and on a lawn at Marina del Rey. Posing in colorful wigs and appropriately tiny booty shorts, she photoshopped Coachella crowds into the background of each image. Thousands of people were fooled — in the age of filters and portrait mode, Hanna's slightly blurred fellow festival goers didn't raise any questions.

A social media stunt that will go down in history alongside the Justin Bieber sideways burrito incident, for sure. If you can't afford a ticket next year, consider this cheaper alternative — Hanna said she ended up having "a lot of fun" during the shoot, and gained "a better understanding of why people go to Coachella."