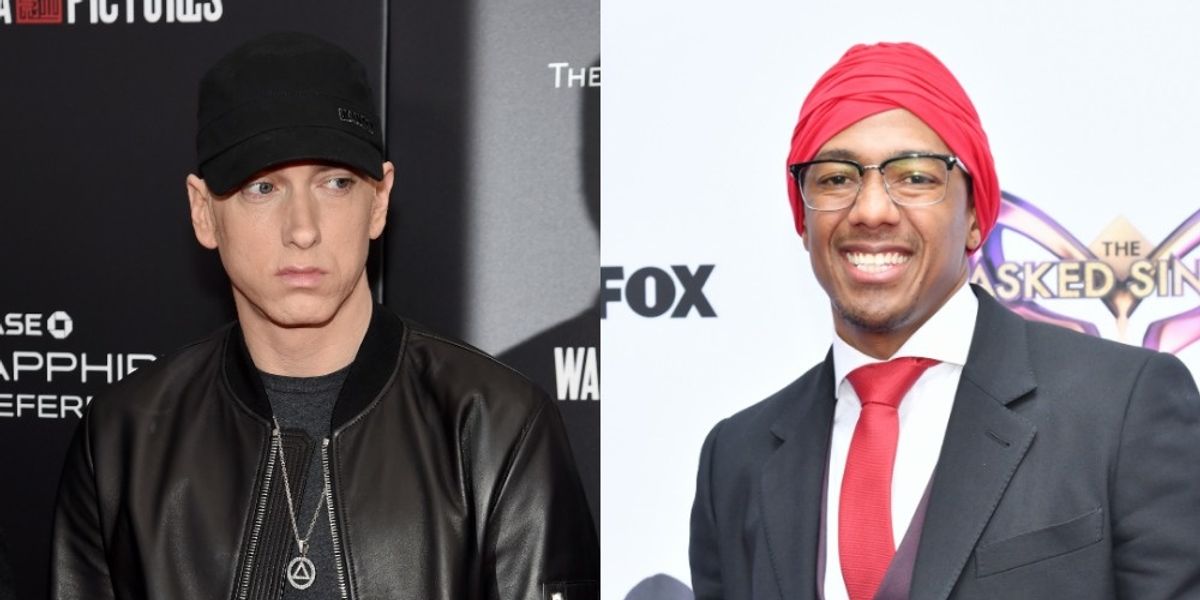 This auspicious week in 2019, we're talking about Nick Cannon and Eminem. Why? Because the duo recently decided to reboot their feud revolving around Mariah Carey. We thought this beef dried up in 2009, but hey, aughts nostalgia is hot right now. And honestly… they don't don't make celeb drama like they used to.

Here's what you need to know.

What is Eminem and Nick Cannon's history?

We're ultimately here today because of Eminem's conviction that he and Cannon's ex-wife Mariah Carey dated for six months in the early '00s — something Carey has repeatedly denied ever happened. The possible lovers traded mild shade for years, but things escalated in 2009 with Eminem's "Bagpipes from Baghdad," which dragged both Carey and Nick Cannon shortly after their wedding. "Mariah, whatever happened to us?/Why did we have to break up?" Eminem asked. And later: "Nick, you had your fun/I've come to kick you in your sack of junk."

The newlyweds then went collectively off on Eminem. Cannon responded, according to Jezebel, on Tumblr, calling Eminem a racist and promising "I'm taking full action on you Eminem. I don't know why no one has stood up to your bitch ass yet."Carey followed her then-husband's post with her diss masterpiece "Obsessed," which was recently revived by a TikTok challenge.

Prior to December 2019, Eminem's last word on the matter was "The Warning" (2010), in which he threatened to release photos to prove his and Mariah's relationship.

Cannon and Carey consciously uncoupled in 2014, which seemed to ease the tension. By early 2019, Nick was blathering about how he and Eminem were good now on T.I.'s podcast.

What happened this week?

Randomista Eminem, who's been laying low since 2018's Kamikaze flopped, decided to use a verse on Fat Joe's "Lord Above" (also featuring innocent bystander Mary J. Blige) to dig up old wounds.

"I know me and Mariah didn't end on a high note," he raps, later continuing: "But that other dude's whipped… that pussy's got him neutered/Tried to tell him this chick's a nut job before he got his jewels clipped/Almost got my caboose kicked/Fool, quit/You not gonna do shit/I let her chop my balls off, too, before I lose to you, Nick."

Cannon retaliated to Eminem's sick burn with his own slappers: "You're old" and "Wanna fight?"

"@FatJoe album is Star studded, he even did some charity work and dug @Eminem out his grave I mean cave!!," he wrote on Insta. "Bring your Ass to @MTVWILDNOUT to Battle like a real legend Grandpa Marshall!!"

NICK CANNON on Instagram: “@FatJoe album is 🔥🔥🔥🔥 Star studded, he even did some charity work and dug @Eminem out his grave I mean cave!! LOL FLAM FLAM! BLAM BLAM!…”

To ensure Eminem got the message, Cannon dropped not one, but two diss tracks in response to the mere verse.

Yes. The first, released Monday, "Invitation," takes shots at Eminem's drug habits, his 23-year-old daughter Hailie, and the fact that his other two kids, Alaina and Whitney, aren't his biological children (Alaina's mother is the sister of Eminem's ex-wife Kim Scott Mathers, and Whitney is the child of Kim and boyfriend Eric Hartter). Cannon also alleges that he Svengalied the whole thing up with Fat Joe to humiliate Eminem. As a bonus, he claims Eminem sucked his chauffeur's dick.

The second, "Pray For Him," which arrived after Eminem's response online, accused Eminem of voting for Trump and getting Botox. In response to the tweets, Cannon shot back on Instagram: "Eminem I see your handlers let you use the internet today Marshall! @mtvwildnout We waiting..."

Miraculously, it's probably Eminem, who is infuriating Cannon by refusing to drop a real diss track. Today, after Cannon dropped "Pray For Him," the misspelled hashtag #RIPNickCanon started trending on Twitter. Some are particularly skeptical about this "The Invitation" bar: "Suge called me the new 'Pac."

Noted messy bitch who lives for drama 50 Cent came out swinging for Eminem, making the honestly good point: "don't understand to save my life why someone would pick a fight with EM."

50 Cent on Instagram: “I don’t understand to save my life why someone would pick a fight with EM. He is a different kinda animal, I haven’t seen a motherfucker…”

Cannon didn't waste time responding to 50 Cent, with a meme of Samuel L. Jackson's role as a plantation butler in Django.

What does Mariah think?

Absolutely nothing. She's probably already on her Christmas vacay, enjoying her annual holiday royalties windfall with her new boo, and repeating the words, "I've don't know them" over and over to herself.