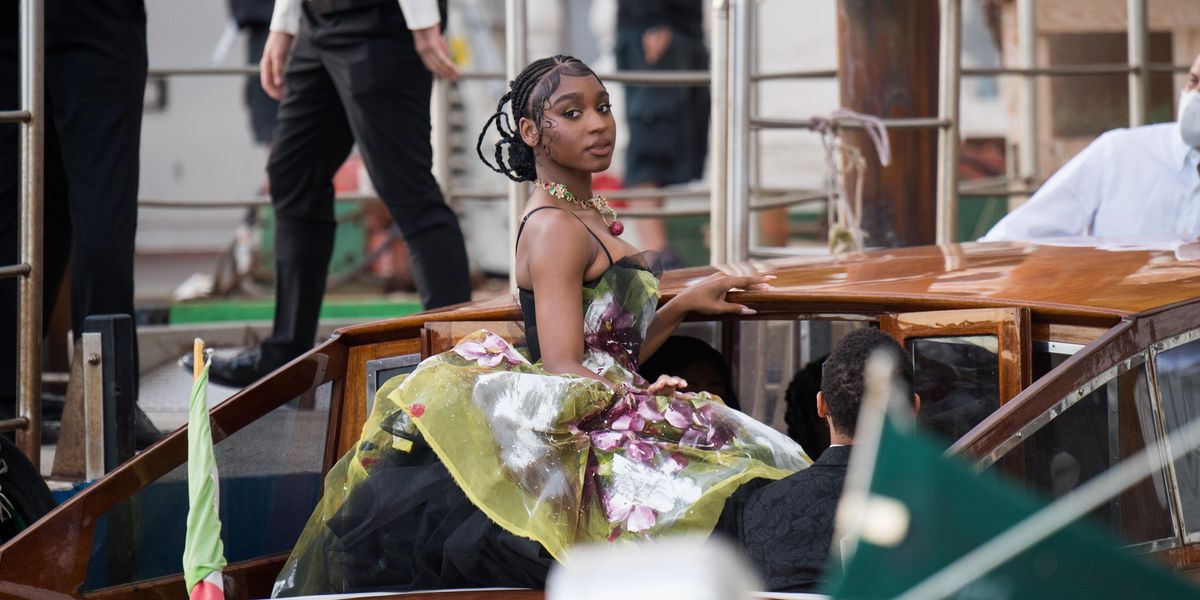 Why Were So Many Pop Girlies at the D&G Show?

Few brands in fashion get people riled up as much as Dolce & Gabbana, whose very public history of controversial remarks and behavior still lingers in everyone's minds. The conversation around the label's place in the industry was once again brought up over the weekend when seemingly every main pop girlie and rap starlet came out for D&G's fancy multi-day Alta Moda couture festivities in Venice.

For many users, it struck a new kind of nerve seeing their favorite female performer align themselves with a brand as polarizing as Dolce & Gabbana. The confusion was particularly palpable in Twitter circles, with fans wondering why celebs like Saweetie, Megan Thee Stallion, Doja Cat and Normani were there in the first place. On the surface, it seemed like another case of famous people disregarding the company's problematic past for a check. But is it really that cut and dry?

To be sure, there were very few expenses spared, as is par for the course for Dolce & Gabbana's lavish Alta Moda (and Alta Sartoria aka Men's) shows, which in past years have taken couture clients to destinations like Capri and Portofino. But this season's proceedings appeared to have more star power than ever, even if the guest list might come off as random. (Helen Mirren? Sydney Sweeney? A performance by Oscar-winner Jennifer Hudson?)

Okay I need to see the BUDGET for this Dolce & Gabbana show because they flew all these celebrities, stylists and e… https://t.co/tX1Mefc31O
— Tyler McCall (@Tyler McCall)1630262913.0

Not to derail this iconique moment in history but isn’t dolce and gabbana very extremely known for overt racism? I… https://t.co/9inTD5erQ2
— Kharli Marxcx (@Kharli Marxcx)1630296257.0

Interestingly, not many people seemed to bat an eye that Kris Jenner or Kourtney Kardashian predictably showed up. Rather, their energy was directed toward the aforementioned hip-hop and pop girlies. Could they really be that clueless about D&G's track record? Or did they just not care? Whatever the case, the special treatment they received was second to none, with their teams and glam squad all being flown in for the extravagant affair.

The spectacle of it all was enough to have some industry corners weigh in once more about the brand as it relates to money, power structures and allegiances. Vogue's Gabriella Karefa-Johnson recalled in her IG Stories a discussion she had with another editor about the topic, in which they were of the stance that "business is business," while Karefa-Johnson shared that one either believes in making changes to this industry or not. (She also revealed that she only shot a D&G look once in four years under "extreme pressure.")

It's a discussion that's been going on for years, one which is reignited every so often once a beloved celebrity or stylist co-signs the brand. (Karla Welch and Law Roach, for instance, have pulled many D&G looks for their clients in recent years.) Some believe there's large sums of money being exchanged in these instances, though that's all just speculation.

In the case of the Venice show, the dialogue was more about why young, Black and progressive female pop stars would want to be associated with a tainted name like D&G — though, it should be said, many of those critical of the brand are arguably in a bubble of their own, not unlike the very celebs who were flown into Italy and pampered day to night over the weekend. Are we expecting too much from these very powerful household names? Or are we putting too much thought into their attendance?

Pierre A. M'Pelé, aka PAM BOY, perhaps put it best. While it's easy (and lazy) to just want to hop on the cancel train, there are layers to this ongoing story that warrant more than just a dismissive tweet. "Is nobody able to have a consequential, intelligent, and intelligible conversation about Dolce & Gabbana?" he wrote. And by the looks of it, it's something that the industry will likely need more of as these issues continue to dominate the news cycle.