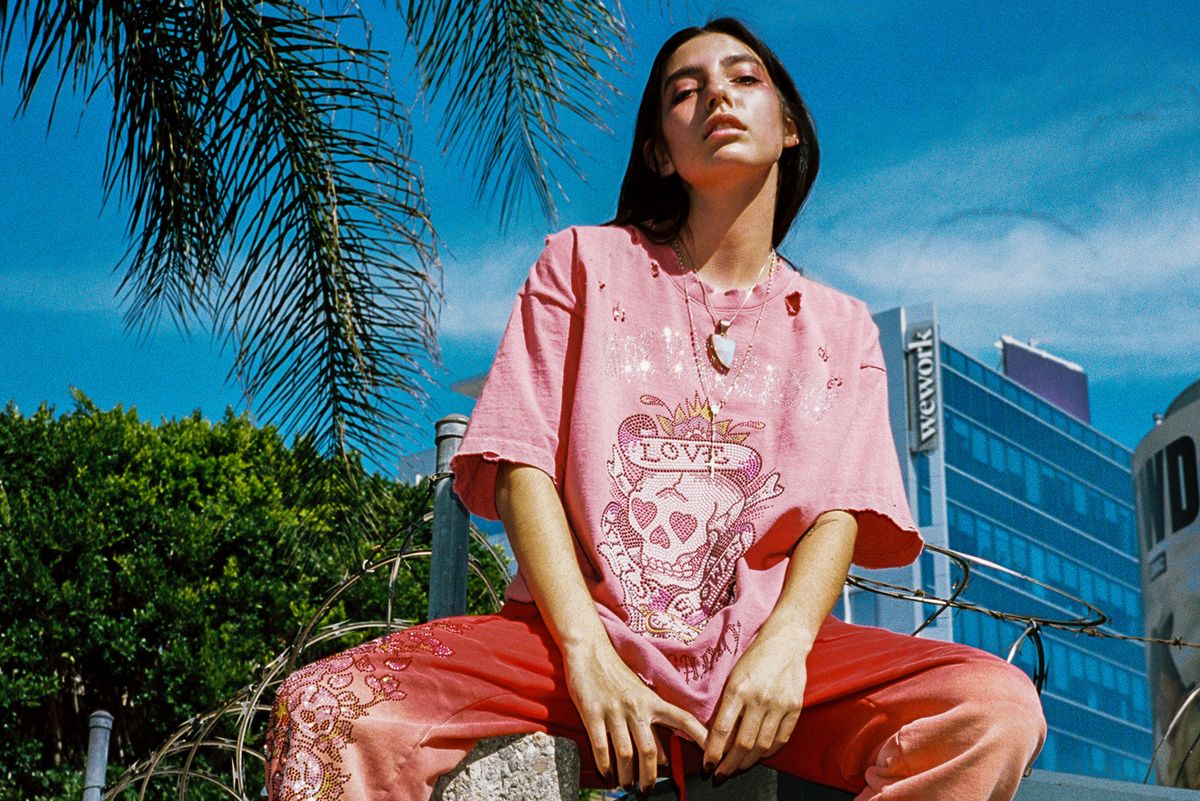 Remember how glorious the fashion of the early-aughts was? It was a delightful intersection of gaudy Los Angeles glamour, street style, and pop culture.

Case in point: Paris Hilton memorably wore Von Dutch trucker hats on The Simple Life and everyone and their mom (literally Britney Spears and her mother) seemed to rock an embroidered Ed Hardy tee or a similarly flashy low-rise denim moment. Both brands peaked in popularity until around 2010, and were led by the designer Christian Audigier, who died in 2015.

But it appears that Ed Hardy is teasing a comeback. For an upcoming collaborative collection, the iconic American streetwear brand has partnered with Rose in Good Faith, an emo-inspired LA line teeming with millennial fashion nostalgia. (You may recall that Rose in Good Faith re-introduced '90s favorite, JNCO last year with a playfully maximalist capsule line).

To make the Ed Hardy launch feel distinctly 2018, Rose in Good Faith tapped Roy English, a musician who performs as Jagwar Twin, to direct and style the campaign's LA-cool imagery.

"Speaking of what is to come, this is just a taste," says Rose in Good Faith's creative director Akiva Alpert. "This is fundamentally a design language and vision that is Rose in Good Faith. There is no question of the impact Ed Hardy and Christian Audigier have had on the modern streetwear movement, period. In many ways we are paying homage, however, if Ed Hardy's origins were rock n' roll, for me, this capsule is hardcore, this is death metal."

And speaking of hardcore and death-metal, English, who also poses wearing the new clothes, enlisted DeathByRomy, a rising goth-pop singer we love, for a campaign that feels totally, unabashedly generation now.

When it came to conceptualizing the campaign, English leaned into the idea of "digital inception" — an idea he says is rooted in challenging the world's fraught political and emotional landscape. It also reflects the "duality and the collective human spirit" of his work as Jagwar Twin (For a sonic example of this concept, brought to life, check out his new song, "Loser").

When it came to actually creating the images, English tells PAPER he wanted to blend modern technology with early aughts media, as a commentary on society, and as a way to preserve the spirit of Ed Hardy's popularity.

"[With] Ed Hardy being from the early 2000s when analog media was first really transitioning to digital, and Rose in Good Faith being in 2018 where everything is digitally captured and manipulated, I had it shot on film using cameras from the early 2000s," he explains. "I then took those high-res film photos and took pictures of the pictures on my dirty laptop screen using the iPhone camera. The commentary is that we all have so much technology and tools at our disposal, but we're losing our purpose as a society."

See the images, below, and keep your eyes peeled for the first Rose in Good Faith x Ed Hardy collaboration, which is set to launch exclusively at Nubian, in Japan.