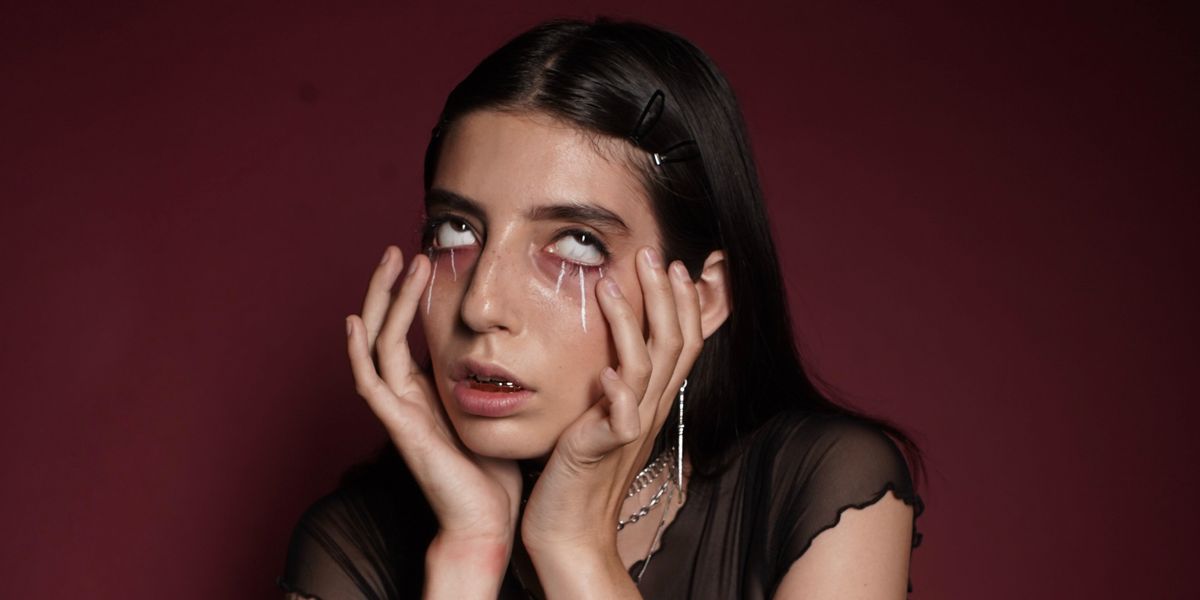 Do you believe in monsters? Demons? Are you afraid of the dark? The uglier parts of us that make us human?

Meet DeathbyRomy, an 18-year-old Los Angeles-based singer who isn't afraid of any of the above. The newly minted singer-songwriter embraces her darkness, not just because it renders her high-fashion goth aesthetic more powerful, but because she's lived through some tough trials and come out on the other side. As a teenager growing up in the digital age, Romy has had to become strong to withstand online criticism of her bold look and sound as an artist, and to navigate social scenes a person living with anxiety. As such, she developed confidence in her message and her ability to help light the path for others, and she's learned to embrace the things that made her stand apart from her peers. "Kids and adults are alike because we all have emotions," Romy tells PAPER. "I wanted to make songs that were completely universal and make it about the passion that I have for wanting to live."

Sonically, Romy feels like a lovechild of Lana Del Rey and Zola Jesus: she borrows the cinematic expanse of Lana, the minimal nihilism of Zola, and the unrelenting sense of romance from both artists. But her voice, a full-bodied raspy howl that sounds inherently full of life experience, is distinctly her own. It shines through on confessional songs such as "All U Have Is YOU," "Romy What's On Your Mind," and album bookends, "Don't Fall For Monsters" and the Lil B-assisted "Demons," all of which are among the strongest offerings from her just-released full-length debut, Monsters.

We caught up with Romy on the heels of her album's debut to chat about getting out of high school alive and the difference between monsters and demons to getting pep talks from her longtime friend, The Based God Lil B. Read on and stream Monsters below.

Where does this project come from for you?

This project is kind of like tells the story of me from when I was 15 to 18. It starts when I was a freshman and I dropped out to just pursue music because of a lot of things going on. I was in a wheelchair for a while and honestly was a rolling target. It tells the story of how I overcame a lot of anxiety with past relationships, friendships, a lot of different things. It's almost like my retrospective of what I learned over the years.

What do you mean by "rolling target?"

I was in a wheelchair. I also always dressed very differently, as my mother would say. Back then, I was at an art school and I thought I would be very accepted in Los Angeles being that little person I was but even in art school it wasn't like a huge welcome, it was still high school. I was just like a dork honestly and just considered myself a moving target. That shit gave me the drive to be like I'm out of this bitch, bye high school.

"You have to say fuck everything and push forward... you have to know yourself and trust your gut."

If there was a lesson you learned from going through all of that, what would you say it was?

The biggest lesson I've learned so far in life, in school, in life or just in general would be fuck everyone's opinions except your own. At the end of the day, you can't sit there and try to make everyone else happy, if you know that you're unhappy. You have to say fuck everything and push forward. You can't listen to any exterior voices, you can listen, you can be respectful about opinions, and choose to listen to people's constructive criticism of course—constructive criticism is one of the most powerful ways that I can push forward. But at the end of the day, you have to know yourself and trust your gut and not anyone else's.

Does that message that you took from your real life experiences translate online?

Definitely. Before I met my manager, I had no one behind me for what I was saying on Instagram, It was kind of a mess. I was that girl who was like 'listen to my music or don't follow me'. I love our generation where we can market ourselves online though, my manager wouldn't have found me if it wasn't for Instagram. That's why I think as powerful as Instagram can be, you have to still market yourself as a sink or swim type shit or else you are just going to hurt yourself, trying to market yourself online. People's opinions are still always going to be there, the internet is a sea basically and that's just my opinion on sticking to your gut - it's almost like a survival instinct, when you live in LA especially.

Especially in LA where there is a lot of pressure to be someone else or to be a better version of yourself.

Yeah, especially because I preach positivity but am also a bitter person myself. I am crazy passionate but I prefer that rather than being a boring person who is like 'check out my songs on your own time' I don't mind being the in your face girl as long as I'm not the artist who has to like scream I'm an artist. I luckily have my manager to help market myself.

Monster has to do with the analyzation of one bad relationship and a million other relationships that would come and go over the years. Monster refers to people who have no respect for themselves and therefore don't treat anyone with respect and those are the people I consider to be monsters. Demons are the thoughts inside your head; the insecurities, anxieties, major depression. "Demons" is more about me pushing myself too hard to be a good artist because of constraints and views on women and knowing that this industry is like a sink or swim industry.

I always have known it was going to be rough. I am honestly a big baby, I hate that term but monsters are who you can use your demons to fight. If you trust yourself and you know yourself, no one can get to you. If you remember that only your own head can eat you alive, you don't have to take the opinions of anyone else. That's what I learned the past few years, we are our own biggest demons, unless you fight those, you can actually fight the monsters in a beautiful way. Everyone has insecurities and fears. I'm not going to lie, I struggle with fears of really real things which I think causes me to live in my head, but that's also paranoia. That's why I call it demons.

Do you have a favorite song on the album?

Yea, "Romy What's On Your Mind." It started out as a beat that was very raw, it was like a sample of the rain that my friend Kevin had found and basically I didn't really know what I wanted to write to it. It was back in November when I was ending a really bad relationship, I was dealing with my own insecurities about my body and everything. I went in and just started singing and then we reconstructed what I had sung and my manager helped pull a chord out of what I had sang and that song was my baby. It inspires me to do what I want to do and why I feel like I don't want to die.

I know that people can heal themselves and can be kind to themselves and choose to feel good about situations—that's why I am speaking to myself, the whole point of the song is like talking to myself. Even when I say, "baby it's you and me tonight," I am looking to myself in the mirror and thinking about myself. I like to make music that I think can actually help other people because of things that I went through as a kid—things that a lot of kids go through. Kids and adults are alike because we all have emotions, and I wanted to make songs that were completely universal and make it about the passion that I have for wanting to live.

How about the collaborations? How did those come about?

My manager actually introduced me to Cuban Doll. She's a really awesome girl and that was a fun song to make. Same with Yung Bans—my manager and his manager knew each other. I got a little verse from him that was really fun, and I got to work around it which was really cool. That was my first time trying to work around another artist instead of sending something off to someone. And then Lil B, I've been a fan of his since I was 13 and he's been a friend of mine since I was 14, he is a long time friend of mine who has always pushed me to not beat myself up. He knew me back when I was a mess on Instagram, he knew I was trying to make music from a very early age, and he is just a supportive, big brother figure to me. One night, he heard a lot of songs on the project and sent me a beat for the project that I actually never ended up using, but one night he sent me a voice memo and the next day I was like, "We have to put this as the intro for one of the songs," so that's what that was.

The album has been out for a week, how are you feeling?

I'm not going to lie, right before it was released I was stressing—my life was about to be presented in front of the whole world and it was. Now, I feel a lot of relief after seeing how all my fans are reacting to it and all the love I've been getting. It makes me really happy. I listened to the album a million times over the year to get it to the point to where it is now.

It's refreshing to hear that after all this time you're still not sick of it.

I love it. My manager and I worked since last November, up until the week that the album dropped when we actually added another song. We were non-stop tweaking the beat, sending it back and forth to mixers, making sure they weren't putting shit on my vocals. I hate when my vocals sound too mixed or something, I'm really picky about that shit.