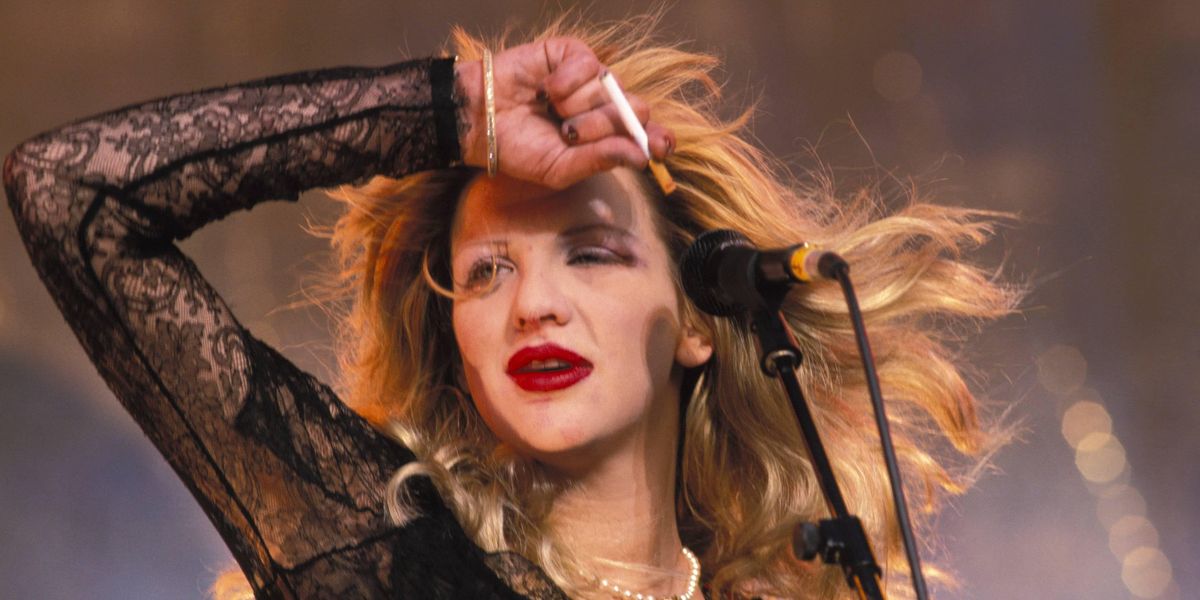 After recently coming around to Gen Z culture ("They make me laugh"), Courtney Love has now shared that she's officially a drill fan — and she's using her platform to mobilize others to listen to everything she's discovered.

Related | Courtney Love Made a Meme

The musician took to Instagram with an in-depth post about her favorite drill artists, focusing on the young women of color who're shaping the genre in both the US and UK.

In her post, she revealed that a conversation with "the sacred blue flame of brilliance" FKA twigs inspired her to listen to drill. "I'd never heard of it, so went down the hole & love these amazing drill artists in the UK (& in Chicago)."

Admitting she's never been a hip-hop expert, Love continued, "So many women and girls having their fucking say on their fucking terms that I'm starting to really enjoy it. Eerie, furious, vulnerable, cool & beautiful."

In a carousel post, she highlighted five different artists — from Ivorian Doll to Katie Got Bandz — that she's become a fan of while also tagging them. If you're not already listening, you can get into them alongside Love, below.

Rapper Ivorian Doll calls herself the "Queen of Drill," and after you listen to her break bad on "Rumours," you'll agree. Initially a YouTuber, Ivorian Doll got into rap by starting to collaborate with fellow UK rapper Abigail Asante. It wasn't until 2019 that she started releasing her own music. Her first single was, aptly named, "Queen of Drill." Since then, she's been on a tear thanks to the aforementioned "Rumours" being her breakout track, which is also the first song in Love's Instagram carousel.

Juice Menace brings the fists through her voice when she steps up to the microphone. The second artist of Love's carousel post spits like she's attacking a smash room, asking people if they have problems with her and proudly proclaiming the fury she brings if provoked. It's no wonder that her name comes from the classic street films Menace II Society and Juice. Last year, she was on "Ones to Watch" lists and now she's impossible to miss.

Hailing from Chicago, Katie's been arguably the biggest woman in the city's drill scene for over a decade. She released her first mixtape, Bandz and Hittaz, in 2012 and throughout the next three years, she introduced the world to her Drillary Clinton alter ego through mixtapes and kept people paying attention all the way through 2015 before taking a hiatus. After a three-year break, she came back to give people a new side of her, sharing the mixtape Rebirth in 2019.

Teezandos hasn't even touched 20 yet and she's one of the UK's hottest rising drill rappers. Credited with launching the UK Drill scene in 2019 when she performed a "Who Got Bars" freestyle, she's been tearing up airways ever since, delivering swift, violent promises over heart-racing beats. Just google her freestyles, or listen to her music, like "Highlander 2.0" and you'll have to get a broom and dustpan to pick your chin up off the floor.

Do you know how hard it is to blow up as an artist? Imagine doing that in less than a year? Not viral fame, but actual, serious support that continues to grow with each release? Cristale touched down early last year with a slew of freestyles such as "Opp Thot Freestyle" that listeners tuned into. Once she released her first official single "Whites," she hit the mainstream. With her bouncing-off-the-walls, vein-clenching energy, she's going to be around for a long time.