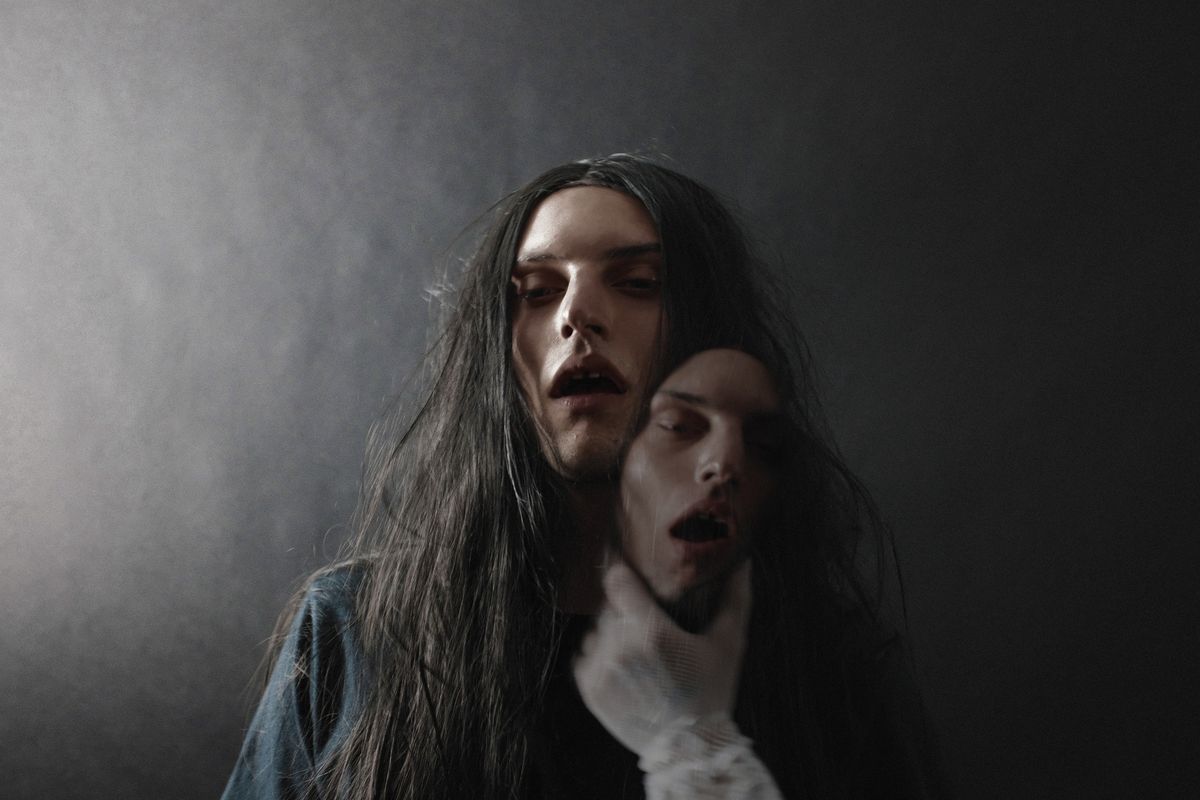 During Wednesday night's soundcheck for PAPER x Club Quarantine, a few sneaky Mitch Grassi stans somehow got ahold of the Zoom code before it'd been publicly announced and crashed the private room. Grassi, of Pentatonix and Superfruit fame, was rehearsing to debut a DJ set under his new solo moniker, Messer, and they were eager to see his reinvention. (Once inside the Zoom, they looked to be in absolute disbelief, their mouths literally agape.) Unfortunately, they were swiftly removed until the party opened at 9 PM EST (we're so sorry), but Grassi went on to deliver a range of dark, techno tunes (download his set, here) while sipping red wine and coyly shaking his long, straight wig from side to side.

The fandemonium surrounding Messer was fierce, setting the tone for a night of icons virtually interacting with icons — and while it's typically a three-hour party that ends at midnight, this one finally capped off at 1 AM EST.

Brendan Jordan was the party's official host, gassing up the performers and chat room all night long, while kicking his towering strippers heels in the air from home in Las Vegas. He first became famous for going viral with his "Applause" choreo in the background of a news broadcast and has since grown into a beloved beauty guru on YouTube and so much more. Literally every DJ gushed over Jordan's eye makeup, which he nonchalantly touched up on cam throughout the party. There were even some full circle moments.

Before our back to back icons later on, PAPER x Club Quarantine kicked off with some rising stars, both in music and drag. New Orleans' Edge Slayer dropped in to DJ and delivered everything her moniker suggested she would, while Club Q's co-founder Casey MQ debuted some of their own, never-before-heard material. Earlier in the day, MQ said they'd DJ with no pants and delivered on that promise, twisting and shaking in front of the Sean Cody logo for an audience that's clearly fallen in love with them over the past month. Paris L'Hommie gave us Grace Jones' "Pull Up to the Bumper" and flashed their bare bumper, while Junior Mint performed a mix of Whitney Houston's "I Have Nothing" that doubled as powerful commentary on trans identity. When Mint's balloon hair piece popped to reveal an explosion of glitter, the club lost its shit.

Then, there was Uffie, the absolute Queen of Myspace, who brought us back to a time when American Apparel employees made you feel poor, blog house playlists filled your iPod Classic and the Cobrasnake determined who was worth paying attention to. While Uffie's been releasing some new, incredible work lately, between "Drugs" and, more recently, "Ego," she leaned into nostalgia for her DJ set, spinning everything from classic Santigold to M.I.A. and Crystal Castles. When she played the Mirwais Pop Remix of her career-defining track, "Pop the Glock," Uffie proved that she still "runs this show" — and looked incredible, serving head-to-torso silver a la Zenon: Girl of the 21st Century. She even debuted an unreleased Uffie song halfway through.

Related | Uffie, Yes THAT Uffie, Is Back

Bounce legend Big Freedia had an entire backyard setup, opting out of a traditional Club Q DJ set for a real live performance with two backup dancers (who're apparently her roommates in NOLA) and her own personal DJ. After two (or three) bottles of wine, experiencing Freedia's explosive energy on-camera while isolating is the closest feeling to a pre-coronavirus, physical concert. She twerked for 30 minutes straight, did call and response for the chat to type along to, and worked through monster bangers like her Icona Pop-assisted single, "Louder," and, "Gin In My System." It felt like a really big moment, but Freedia doesn't do anything less. (Also, watching Uffie smiling and bopping along from her home to Big Freedia's show is an unforgettable sight.)

Where a typical PAPER x Club Quarantine night ends promptly at midnight, Aluna (formerly of AlunaGeorge) kept things going well into the morning. But she had a lot to celebrate, having just released "Body Pump," her first single as a solo artist under Mad Decent. Moving through hit after hit, Aluna's DJ set kept the party filled, as people tuned in from all over the world in full looks. There were outfit changes, colorful costumes, people Zooming from their bathtubs or while cooking in their kitchen — a wild, celebratory free for all. As Aluna told PAPER in her interview about this reinvention, "I like the idea of building a world where it's okay to be us."