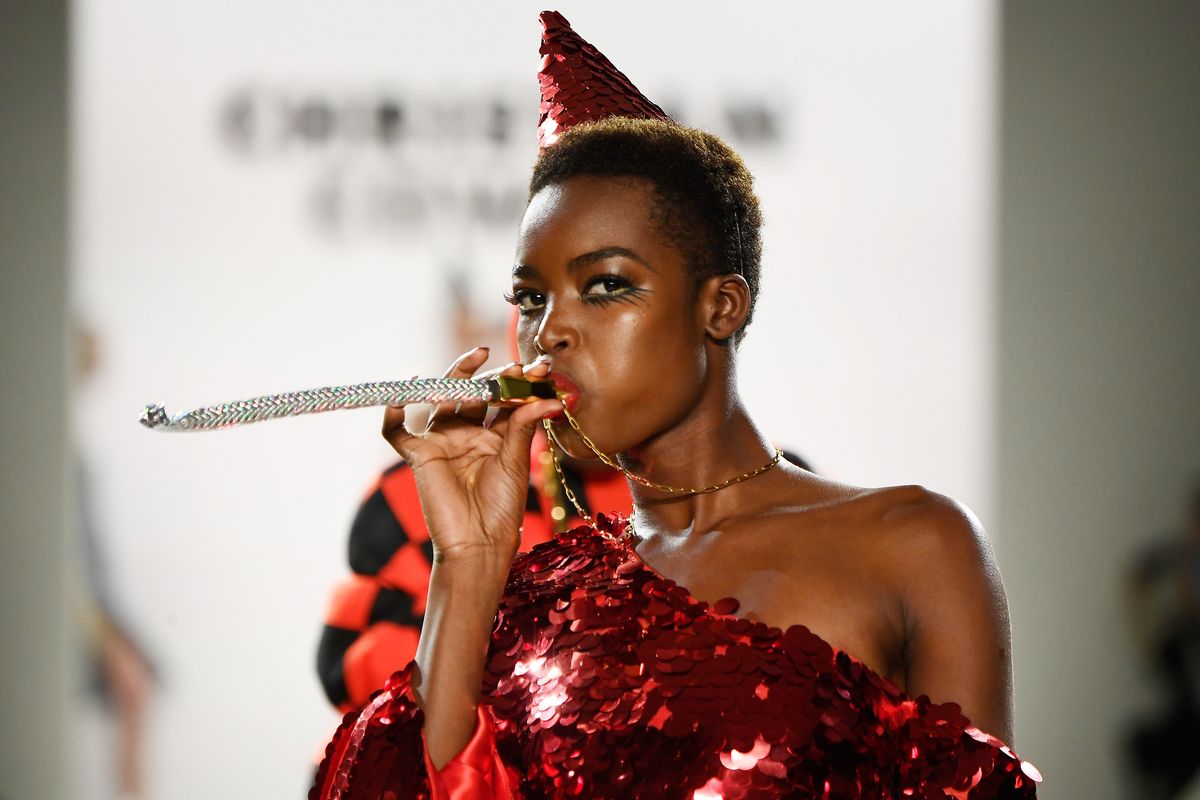 Venerable jewelry designer Chris Habana boasts several collaborations with then-emerging designers, practically all of whom have gone on to achieve great critical and commercial success. Habana, whose eponymous brand traffics in what he calls "aggressive looks and directions," has previously worked with the likes of Gypsy Sport, Zana Bayne, Prabal Gurung, and Adam Selman. And for Fall 2018, he teamed up with splashy young brands Christian Cowan and Willy Chavarria for two collections that adroitly translate the aesthetics of all involved.

The Manila-born Habana founded his line CHRISHABANA in New York City a decade ago, but still considers himself to be something of an upstart. So when it comes to collabs, he's primarily drawn to the new. "We've worked with bigger brands and they've been great too, but with an up-and-coming person you can sense their passion, and you can feel their design sense from the get-go," Habana said. "People who are just starting out really want to put a stamp on their visions."

After admiring Cowan and Chavarria's "strong, unapologetic" work, Habana reached out to both designers via DM. From Habana's description, the collections came together seamlessly, and the resulting pieces convey clear-cut points of view. Cowan, a British designer worn by celebrities like Miley Cyrus, Lady Gaga, and Cardi B (the rapper wore his clothes both on the cover of her new album, Invasion of Privacy, and during her blockbuster Saturday Night Live performance) makes garments for party girls — sequins and feathers abound, and during his last runway show, models even sported glittery conical party hats. And so Habana's work with the designer, fittingly, is a take on party favors, with necklaces that elevate raver glow sticks and paper party whistles. The collection is clearly perfect for New Year's Eve.

Habana explained that Cowan was focused, and wanted to make luxurious party accessories. But the jeweler took it one step further, also drawing inspiration from vintage, gem-like perfume bottles, whose shapes influenced the necklaces' 14-karat gold fastenings. "To me, Christian's collections in general have this very brazen kind of excess, almost like '80s Dynasty, translated in a very modern way" said Habana. "His clothes have this very excessive, glamorous kind of expression. So when I started looking at it, I started thinking that it reminded me of vintage perfume bottles."

So while Habana's creations for Cowan bring to mind an eternally confetti-covered affair, his collaboration with Chavarria was influenced by something far more pressing: the biased mass incarceration of black and Latino people in America. "[Chavarria] does a lot to promote Latino culture, but it seems to always be translated through this minimal type of eye," said Habana. "So when I started talking to him, he said he definitely wanted to keep that feeling of keeping it all about Latino culture, homeboy culture, especially in LA. And as we kept talking, it became kind of apparent to me that we both wanted to make a comment on the American prison system, and migrant workers, and how that all tied together."

Chavarria's last collection celebrated his Mexican-American heritage, drawing on both Chicano style and the clothes of California migrant workers. The show was both uplifting and dark; models were shown crying, acknowledging the dire current political situation for people of color. In an interview with Remezcla, Chavarria stated that he is "glorifying my own people, and giving back to my own people — showing us in a light that is intelligent, sophisticated, and thoughtful. It's not just clothes."

Habana's pieces show a precise extension of Chavarria's vision, utilizing Catholic symbols like the Virgin Mary, the Mary of Guadalupe, the Sacred Heart, and a classic crucifix, and adding elements of prison weapons and drug culture. One crucifix is adorned with weed leaves; another bears a switchblade. Habana described one Virgin Mary piece as "almost melting into a shiv," and he carved a Sacred Heart into a coke spoon.

The pieces are beautiful and impossibly intricate; Habana carved many of them himself. But while they are designed to honor Latino culture and condemn a racist prison system, I asked if he was concerned about white customers wearing the pieces, if it constituted appropriation. "For me, it's really about we feel," he said. "If people kind of pick up on it when they purchase the pieces or see it on Instagram or something that's really great, but we're not ones to push our own agenda. Our agenda is being pushed through the work itself. Our work speaks for itself."

2018 is going to be a big year for Habana. In addition to these collaborations, he's gearing up for an August presentation with CALA and Next Century 21, the impossibly hip concept store from downtown discount stalwart Century 21. He'll also be art directing and participating in an exhibition at Tokyo Fashion Week; other major projects are ahead, though he has to keep a tight lid on them. But overall, the future looks bright. Much like a 14-karat necklace.