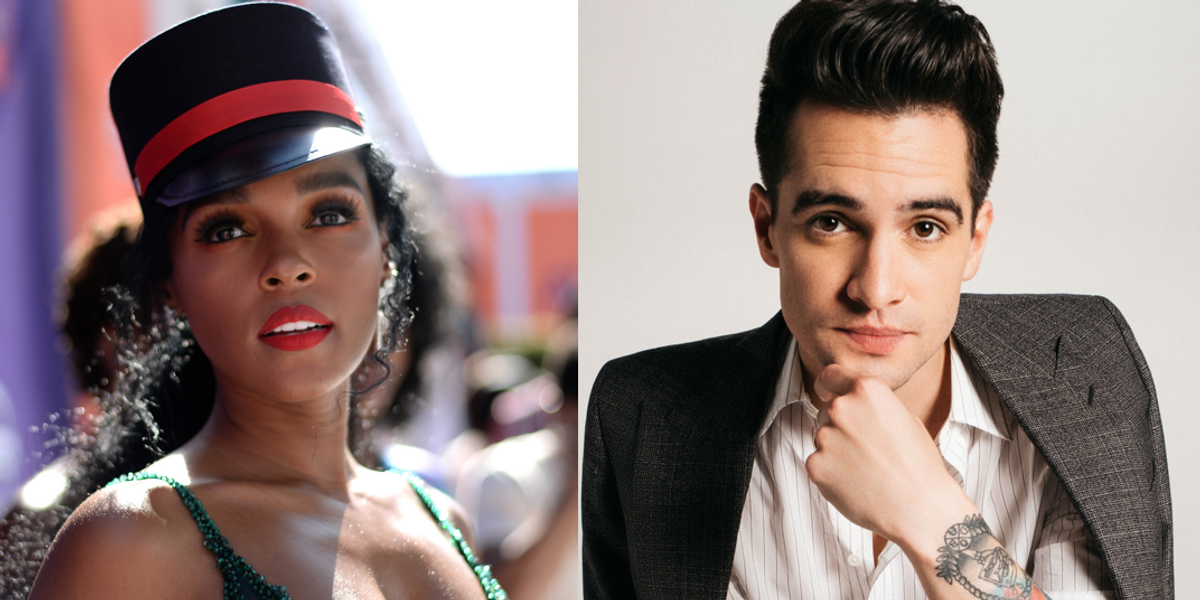 Celebrities Are Identifying as Pansexual, Here's What That Means

In an interview with PAPER, Panic! At The Disco frontman and long-time heart-throb Brendon Urie has come out as pansexual. He follows Janella Monáe as the second entertainer in recent months to embrace the term, marking a shift in the way celebrities are publicly defining their sexuality.

Despite his efforts for the LGBTQ community (he recently donated $1,000,000 to the Gay, Lesbian and Straight Education Network), Urie has come under fire for his approach to publicly defining his sexuality. He has, in the past, claimed himself to be "stage gay" or "barsexual," describing his proclivity to kiss his bandmates during live shows and his attraction to friends after he's had a few drinks.

Urie apologizes for his previous statements in the feature, before revealing himself to identify most with pansexuality: "I guess you could qualify me as pansexual because I really don't care. If a person is great, then a person is great [...] I guess this is me coming out as pansexual."

Related | Brendon Urie Lays it All Out

Janelle Monáe's album was strategically dropped the day after her instantly legendary Rolling Stone cover story hit, during which she came out as pansexual and set queerlings everywhere on fire with enthusiasm.

"Being a queer black woman in America... someone who has been in relationships with both men and women — I consider myself to be a free-ass motherfucker," Monáe said. "But then later I read about pansexuality and was like, 'Oh, these are things that I identify with too.'"

This coming-out statement comes after years of fan speculation about Monáe's sexuality, spurned on mostly by her notable androgynous fashion sense. At various times, Monáe has given cryptic breadcrumbs to speculative theories on her personal preferences, saying that she is attracted to androids, describing herself as sexually liberated, and in the Rolling Stone interview, we learned that at one point in her life Monáe identified as bisexual.

Now, for those of you who might be confused by Monáe's fluid and nuanced sexual identity, let us remind you that it is her right to identify however she pleases at any time she chooses. Since Monáe is publicly out as pansexual, let's break down what that means, and what Monáe's coming out does for awareness around sexual fluidity, and ultimately, sexual freedom.

Merriam-Webster defines "pansexual" as both an adjective and a noun. As an adjective, someone who is pansexual is "of, relating to, or characterized by sexual desire or attraction that is not limited to people of a particular gender identity or sexual orientation." in other words, pansexual people are attracted to all kinds of people, regardless of social categories like gender, sex, or presentation.

Now, as a noun, a pansexual person is "not solely homosexual or heterosexual." In other words, remember famed sex researcher Alfred Kinsey? He's probably one of the reasons why we can all generally recognize that sexuality is not particularly fixed, but rather, fluid, all depending on one's individual right to identify at any point however they choose. And though we can now identify pretty obvious holes in his "0-6" sexuality scale as, generally, times, attitudes, and awareness of varying sexual identities and proclivities have evolved, one thing he argued that remains relevant was that if all people do fall in the 0-6 scale (they don't), they could be considered pansexual people, who make adjustments based on societal or religious restrictions. (This also proves that the awareness of pansexuality isn't some recent invention, which isn't to render it invalid even if it were — it's been around for a hot minute).

That said, most queer and pansexual people don't consider the rhetoric of the Kinsey scale when thriving in their truth because it helps impose said restrictions on their identities. Let it also be known that popular Christian dogma around whether or not said identities is some sort of shameful "choice" is irrelevant when people like Janelle Monáe come out because 1.) duh, even if sexual identity is fluid, there's not some sort of robotic on-off switch for attraction, unless of course you are a sociopath, 2.) no one "chooses" to be marginalized in a society that scrutinizes any sort of "difference" and, 3.) this is literally the 21st century, and diversity in points of view, including sexual representation, is the hallmark of actual measurable progress. It's up to you to acknowledge and respect people's identities, even if they aren't your taste.

Okay! Sexuality 101: In 1976, the French philosopher Michel Foucault also argued that sexuality is a social construct used as a form of control. Nothing about Monáe's coming-out as pansexual is constructed (except for how she planned the press around it, which is frankly just smart when you're dropping an amazing new album). It's liberating to identify as pansexual at all, and that she learned about what it was, and embraced it as something she could identify with in the first place. That part is about choice, but not in the way it's often promoted in society; it's about freedom. Janelle Monáe coming out renders us all more free.