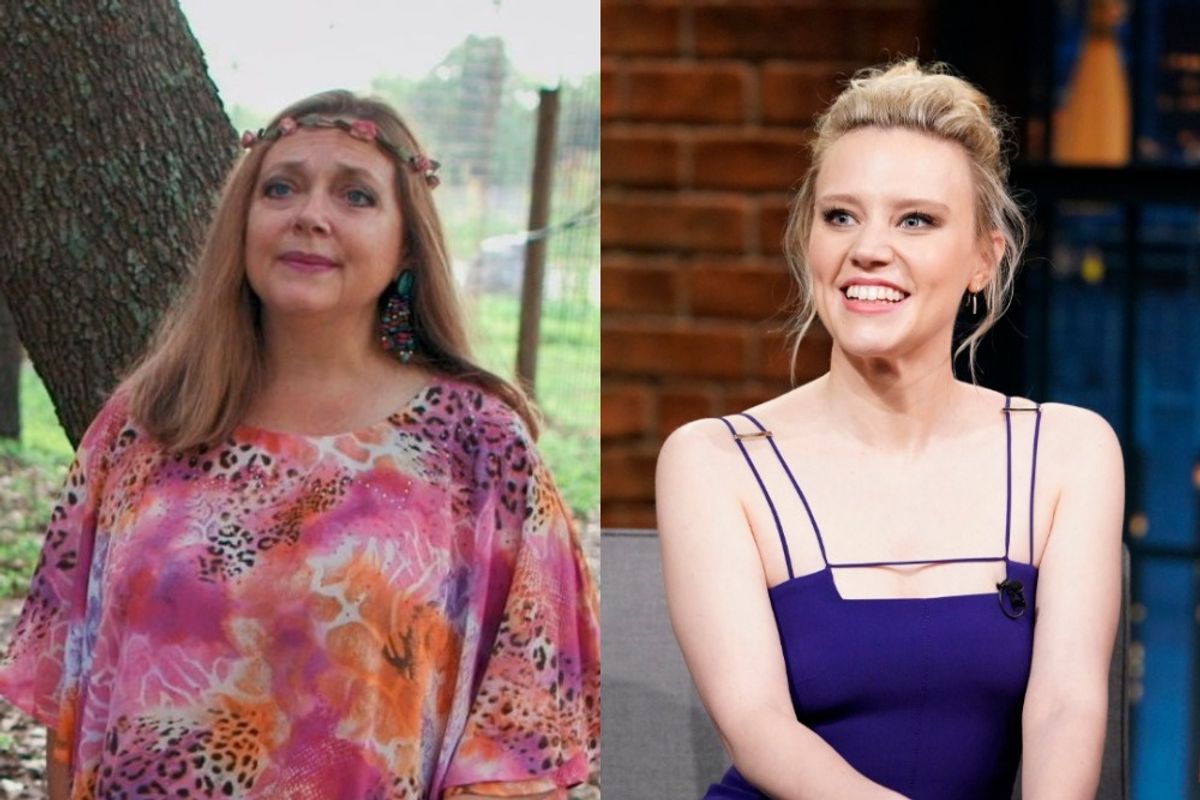 We don't know much about the upcoming limited TV series based on the misadventures of Joe Exotic, Carole Baskin, Doc Antle and the other exotic animal enthusiasts slash criminals of Tiger King who rule our lives now. The upcoming UCP show is not actually based on the Netflix series directed by Eric Goode, but on the second season of true crime podcast Wondry's Over My Dead Body.

One of the only things we do know is that Kate McKinnon has signed on to play Baskin, the flower crowned queen of cool cats and kittens, according to Deadline. Sorry to Lisa Kudrow (though I personally think Meryl Streep, Helena Bonham Carter or Geena Davis could all kill it). The casting was announced in November, long before Tiger King introduced Baskin to the world.

Now, Baskin has addressed the casting choice. She made a statement to EW, complimenting McKinnon and appealing to her personally to use CGI instead of live cats for the series. She might've killed her ex-husband, but she really just doesn't quit.

"Kate McKinnon is a wonderful actress," Baskin says in her statement. "Cat Rescue implores Kate McKinnon to not use real big cats and cubs in the making of her series… We hope McKinnon has a passion for animals and that her series will focus on the horrible lives captive big cats lead when exploited by breeders like Joe Exotic. We further hope she urges the public to support the Big Cat Public Safety Act that would end the cub petting abuse in America."

Baskin condemned Tiger King as "salacious and sensational" and promised that she did not feed Don Lewis to tigers, or put him in a meat grinder. She apparently prefers the podcast.

She continues, "The Wondery podcast, which is the basis for her series, explores the rampant breeding, abuse and exploitation of big cats by breeder and exhibitor Joe Exotic. It would be cruel to use real big cats in a television series about cruelty to big cats." PETA issued their own plea to McKinnon about the series, echoing Baskin: "We hope you'll agree that using technology such as CGI or animatronics or existing footage is the only conscionable way of depicting animals for your series."

Hopefully the show will heed Baskin's responsible warning. Hollywood has a fairly upsetting history of animal abuse, and recently, plenty of celebs have come under fire for their connection to the big cat trade, including Britney Spears, who used one of Doc Antle's tigers in her 2001 VMAs performance.

But dare we say, Carole doesn't sound mad about being played by McKinnon? Who would be?

Photo of McKinnon via Getty / photo of Baskin via Twitter