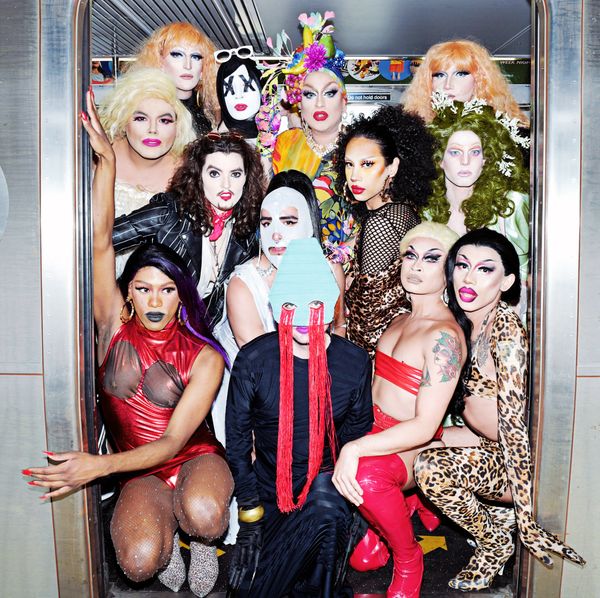 The world's biggest drag festival, Bushwig, is back and bigger than ever. Now in its eighth year, the annual Brooklyn gathering was founded by local drag mothers, Horrorchata and Babes Trust, as a way to bring together queer musicians, cutting-edge drag performers, and icons of the scene under one roof. Thanks in part to the pop culture phenomenon that is RuPaul's Drag Race, drag has never been more popular and because of that Bushwig's reach has been able to extend far beyond its native borough. Along with being featured in HBO's documentary, Wig, this past year saw the festival go international with its second Berlin edition.

Bushwig returns again this year to the Knockdown Center in Brooklyn with a lineup up that looks to bridge the gap between drag's heritage and its future. Topping the lineup is recent RuPaul's Drag Race Miss Congeniality winner, Nina West, who will be appearing alongside some of her other Season 11 competitors, Scarlet Envy and Soju, in addition to past alums Thorgy Thor and Tammie Brown. Living drag legend Lady Bunny will be returning once again to the festival to show all the kiddies how its done.

Related | Bushwig 2018: The State of Drag Is Strong

Local favorites like co-founder Horrorchata, Untitled Queen, Lucy Stoole, Charlene, and Harajuku are all set to return along with a few names you might want to keep an eye on such as Sookie Sterling, Dreamboi, The Salami Sisters, Maxxx Pleasure, Devo Monique and many more. But that's not all: Bottoms, Jasmine Infiniti, Skyshaker, Justin Cudmore, and Michael Magnan will bring their musical stylings to the festival already jam-packed lineup.

"We feel that Bushwig is still a secret in many ways [and] that's how we like it," says co-founding mother, Babes Trust. "I think last year both myself and Horrorchata realized that Bushwig has grown into something bigger than us — its own entity that our family of attendees have organically created along the way."

If you feel like your 2019 summer wasn't queer enough, or was too hot to leave your AC for more than a few minutes, Bushwig is your last chance to binge an entire season's worth of nightlife debauchery and fun. It all goes down September 7th and 8th at the Knockdown Center in Maspeth, Queens, grab your tickets here and check out the lineup's first wave of performers below.