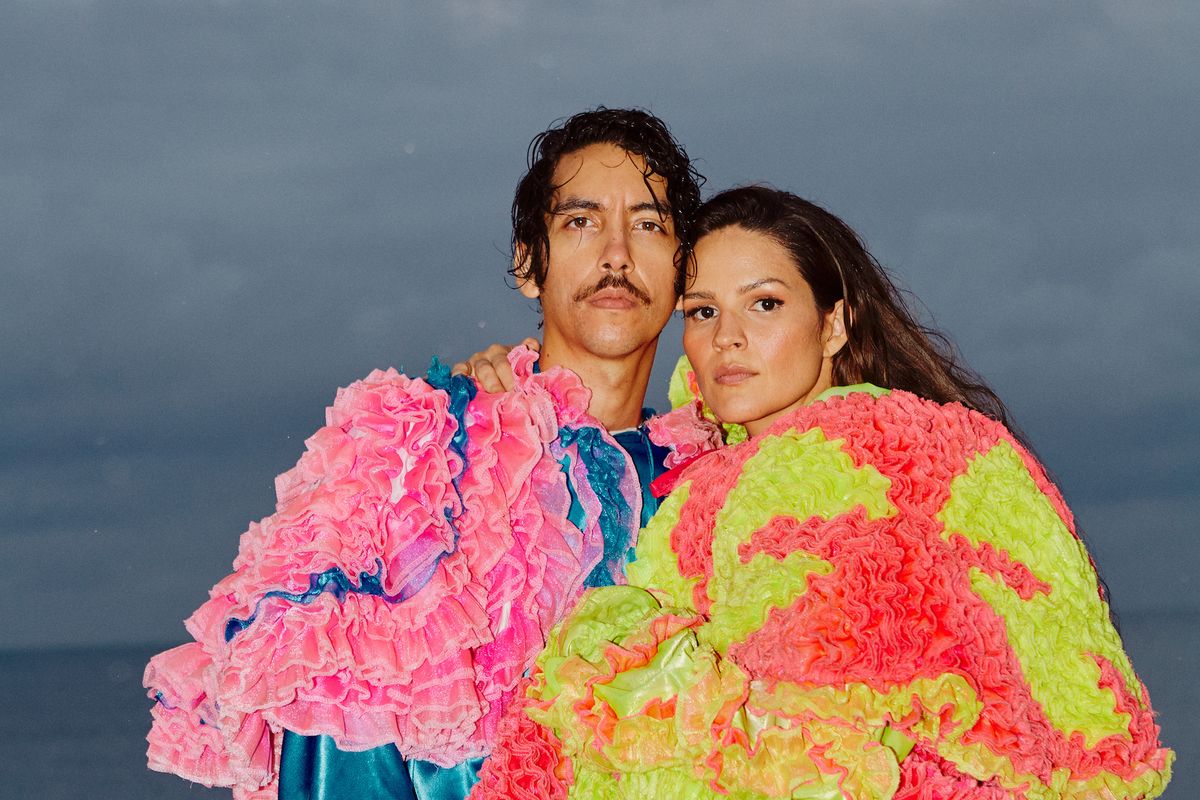 In the fall of 2017, flood waters from Hurricane Maria submerged entire neighborhoods along the northern coast of Puerto Rico, making it the deadliest natural disaster to hit the US in nearly 100 years. After a decade living in New York, Raquel Berríos and Luis Alfredo Del Valle of synth-pop duo Buscabulla decided it was time to go home and make a record. Accompanied by a short documentary of the same name, Regresa — Spanish for "return" — chronicles their journey back to the island.

Related | The Future of PRIMA, a Fund For Puerto Rico's Indie Scene

"It's like you're seeing your mother getting sick and feeling like you just really want to be close to her to help her heal," Berríos recalls over Skype from Aguadilla, where she and Del Valle live with their daughter Charlie. While working on their own music, the duo teamed up with fellow boricua musician Ani Cordero to create the non-profit organization Puerto Rican Independent Musicians and Artists (PRIMA), which provides financial assistance to the local indie scene.

As folks rallied together to rebuild amidst the wreckage, a catchphrase caught on: "Puerto Rico Se Levanta" (Puerto Rico rises up). Over the next two years, the island would have to rise up again and again. 2019 saw what might have been Puerto Rico's largest political demonstration in modern history, prompting both the resignation of the homophobic, misogynistic governor Ricardo Rosello, and a collaboration between Boricua kings Bad Bunny and Ricky Martin. I mean, the power that that has.

Then, almost as a preview of the horrors to come, 2020 kicked off with the worst earthquake Puerto Rico had seen in over a century, from which thousands remain homeless. Now, Berríos laments, "we're in the fourth season of Puerto Rico Se Levanta." Puerto Rico's ravaged and neglected healthcare system is particularly vulnerable to the coronavirus pandemic. As we talk, a Puerto Rican government vehicle drives past the couple's home, pleading over a loudspeaker, "Por favor, quédate en casa": please, stay at home.

Amidst multiple catastrophes, Regresa arrives today. It's Buscabulla's first full-length studio album, although they've been on the scene since winning a Guitar Center contest in 2013. As first prize, Dev Hynes produced their debut EP, EP 1.

In the years following, the two carved out a space for themselves in the Latinx indie scenes of New York and elsewhere. Even now, as Latin music continues to be an indomitable force in industry, Buscabulla's sound remains sonically sequestered on a lush little island of its own. How else do you sustain six years of hype with just two EPs under your belt?

It was inevitable that they became friends and collaborators with Roberto Carlos Lange, who makes music under the moniker of Helado Negro. Neither remembers how they first met, but it was probably on Twitter, Del Valle jokes.

Buscabulla went on tour with Helado Negro in 2016, and have since dreamt up a small handful of ethereal melodies together. On Regresa, Lange offered astral string and horn arrangements to the futuristic love song, "Club Tu y Yo." Born to Ecuadorian immigrants in South Florida, Lange tells me that he saw an immediate kinship with Buscabulla that reached beyond Spanish lyrics and synthy surrealism.

"It's that feeling of just having the sun on your skin all the time, and the humidity and the ocean," he says of the tropical influences on their music. "There's a surreal and magical aspect to it."

There's also a shared detachment from the rest of the US and musical mainstream: "We have taken upon these different Latin-American sensibilities, via the language and looking for music that was always outside of our immediate surroundings different from anything else that you hear on the radio."

Berrios and Del Valle both say they make music in Spanish partly because they so rarely hear alternative music in their native language. While there are plenty of indie and experimental artists making Latin music, much of the spotlight focuses on reggaeton, boleros and more traditional rock music. Del Valle takes issue with the implication that experimental music is in the domain of white artists. "It can be made and enjoyed by all kinds of people," he says, "and it comes from all kinds of places and backgrounds."

Such is Buscabulla's sound. It's simultaneously Caribbean salsa clubs and Brooklyn's dance music scene. It's experimental pop inspired equally by urbano, salsa and chill-wave. The album was produced by Buscabulla themselves and mixed by Patrick Wimberly, known for his work with Blood Orange and Solange. The album includes collaborations with the soulful newcomer Nick Hakim and legendary Puerto Rican songstress Nydia Caro.

Caro is featured on a song eponymously titled, "Nydia," wherein she reminds listeners in Spanish that, "Light comes after the greatest darkness / You can't see the stars if you don't have a dark night."

Berríos confesses that Caro gave her similar advice when they first met. "I guess at some point making the record, I kind of hit a wall," she says. "It wasn't easy to transition from New York to Puerto Rico; a lot changes. You go from living around people constantly to kind of just being in our house. I was feeling isolated and questioning everything and feeling insecure and, I don't know, these visits to talk with this woman were really great."

At the end of "Nydia," Berríos sings, "Como velero se vá / Como paloma se vuela," quoting one of Caro's hits from the '70s that was popularized in New York's gay disco scene: "She departs like a sail boat / She flies away like a dove."

Both Berríos and Del Valle like to reference Puerto Rican musical figures because of what they describe as a cultural amnesia on the island. It's something that was especially palpable to Berríos, who says that New York was ironically where she was able to connect with her musical roots. "In New York, you could find so many great records versus Puerto Rico, it's so humid here that records kind of get trashed," she explains.

In more ways than they could have imagined when Buscabulla chose to move back in 2017, Regresa is a testament to Puerto Rico's resilience. The island is no stranger to natural disaster. It can attribute its very existence to a volcanic eruption, and has had very little time to chill ever since. The record was similarly formed under the rubble of earthquakes and awash in the flood of hurricanes. It was tempting to indefinitely delay release — Regresa was originally slated to be drop in April, but the January earthquake pushed that date back to May — when the pandemic arrived, it became even clearer to the band, perhaps as it did to the world, that disasters are inescapable. They're ignored by the powerful but endured most by those of us who aren't.

Most pop music right now can feel too estranged from reality to be enjoyable. But Regresa offers an accidentally time-appropriate reprieve that is at once a tropical vacation and a poetic reckoning with the very conscious act of going, being and staying home.

Closing out the record is "Ta Que Tiembla," a song for clubbing during cataclysmic circumstances.

"Que lo viene viene y viene fuerte / Y cuando viene viene de repente / Que to' se mueve viene bien potente / Hay que meterle hasta que reviente," sings Berríos. The sound of sirens blends seamlessly into synthesizers, as she calls, almost devilishly, for us to party through the chaos. "What's coming is strong / And when it comes, it comes all of a sudden." As a heavy drum beat stomps vigorously over the fine line between hedonism and empowerment, "Everything's shaking, it's powerful / You gotta do it, gotta do it till it bursts."

Ironically, "Ta Que Tiembla" was one of the first songs the band wrote on the record, a decade ago with friends in New York. "We felt that it was some kind of weird prophecy," says Berríos, adding that the song is representative of an underlying sentiment in Puerto Rico. The island knows disaster. It knows both struggle and perseverance. It knows what much of the world is just familiarizing itself with now.

"We've probably felt that it's been the end of the world for a while."