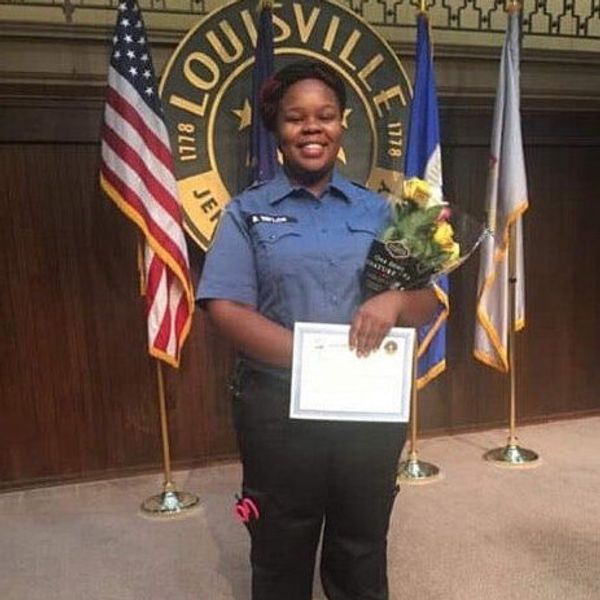 A Black EMT Was Shot by Police in Her Home

Justice remains uncertain in the case of Ahmaud Arbery, a Black 25-year-old gunned down while jogging in February. Now, another tragedy is revealing that, years #BlackLivesMatter began, police still pose a terrifying threat to Black people and public watchdogs remain necessary to demand justice for victims.

Breonna Taylor, a 26-year-old EMT and aspiring nurse was shot and killed in the middle of the night on March 13, while she lay sleeping with her boyfriend, Kenneth Walker, by police conducting a "narcotics investigation." No drugs were found in the home in Louisville, Kentucky.

Her family and supporters are outraged, given that police reportedly weren't even looking for Taylor or Walker: they believed a man named Jamarcus Glover was using Taylor's home to receive mail, keep drugs and stash money. Taylor's family's attorney says that Glover had already been located and identified before the raid on Taylor's home. Despite this, she was shot at least eight times. Police say they began shooting after Walker fired a shot at an officer, which his attorney says was in self-defense, given his home was being broken into and police didn't announce themselves. Although he's a licensed firearm owner, Walker has been arrested and charged with attempted murder of a police officer. Officers had a search warrant for her home that included a "no-knock" provision, meaning that police could enter her house without identifying themselves as law enforcement (the LMPD insists the officers knocked).

"They executed this innocent woman because they botched the search warrant execution," Mr. Crump said in an interview per the New York Times. "They had the main person that they were trying to get in their custody, so why use a battering ram to bust her door down and then go in there and execute her?"

There is no criminal investigation into the police officers who shot Taylor currently, only a "Public Integrity investigation." Both Kentucky's governor Andy Beshear and Louisville Mayor Greg Fischer spoke out about the case. Fischer promised a thorough investigation, which once completed, will be reviewed by the Commonwealth Attorney before next steps are decided. Beshear called Taylor's death "troubling" and said a federal prosecutor, alongside the local prosecutor and attorney general, should review the results of the police investigation.

"She had a whole plan on becoming a nurse and buying a house and then starting a family. Breonna had her head on straight, and she was a very decent person," Taylor's mother Tameka Palmer told The Courier-Journal. "I'm not sure that they understand what they took from my family."

Grassroots Law, an organization also involved with Arbery's case, is circulating a petition and asking supporters to make calls demanding that a special prosecutor be appointed to the case, the department fire the police officers involved and for all charges to be dropped against Walker. Find other ways to demand justice for Taylor here.