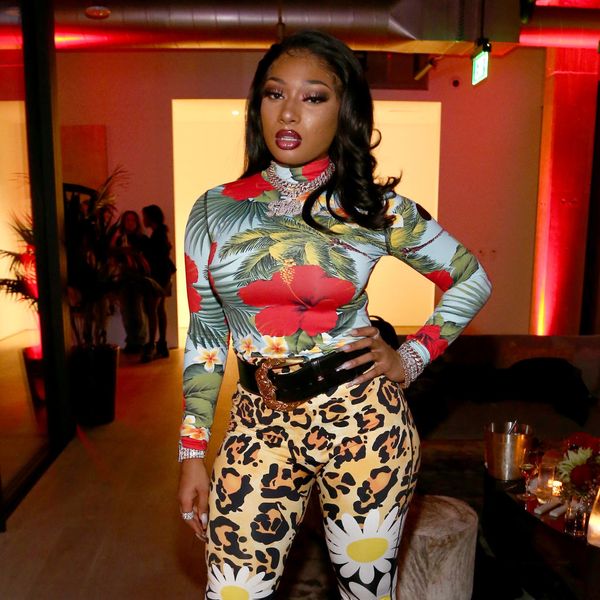 Megan Thee Stallion is on a roll so far this year, having just released her high-octane collaboration with Normani, "Diamonds" from Birds of Prey: The Album. On "B.I.T.C.H.," rap's underdog heroine bites even harder, with a flipped Tupac Shakur sample for your nerves. On the laid-back cut, which reportedly comes from her upcoming debut album Suga, Megan commands respect in a new relationship with her reliable mix of unbothered swagger and nuanced lyricism. My favorite bar is: "I ain't perfect but I'm tryna fix the shit that's not workin'/But it's 2020, I ain't finna argue 'bout twerkin'." Tell 'em, sis.

Speaking of Birds of Prey, the latest cut from the all-star female album is Doja Cat's "Boss Bitch." While the track may not pose anything new for devout feminists, it's still always nice to hear Doja let loose, reversing "bitch" to mean the it girl in the club, the life of any party and the boss of any boardroom. She even takes her message to the runway, fiercely rhyming "boss" and "gloss" over rapid-fire electro-house beats. Harmless, unapologetic fun for the boss bitch in you.

Hayley Williams' debut solo single (don't worry –– Paramore is still her baby), "Simmer" is exactly what we didn't expect from the emo-rock veteran. That's a good thing. Rather than coming roaring out the gate, Williams holds her breath and seethes as if through gritted teeth atop a tense arrangement about the slow-burning nature of her rage. You can almost hear her calming herself down when she sings "simmer down" repeatedly. The track (and its disturbing video) is a taste of what's to come from Williams' first-ever solo album, Petals for Armor, out in May. Where she goes from here is anyone's guess, but you can bet it'll be wonderfully surprising.

Jessie Reyez announced her highly-anticipated debut album Before Love Came to Klll Us (out March 27) today with "Love In the Dark," a piano-based ballad from the powerfully emotive singer. "I'm nothin' without you/ I can't leave you alone," she sings, pledging endless devotion to a life-changing romance. There's also universal truth here: "We're only humans floating on a rock, but I think you are made of stardust," Reyez, like anyone in touch with their humanity, longs to be held, loved and seen.

Everything Rosalía sings sounds like high stakes and imminent danger. Mostly, this has to do with the singer's loyalty to Catalan flamenco tradition, and a determination to make the dramatic styles and sounds of that culture modern, fresh and global. "Juro Que" is a considerably chilled-out affair stacked up to more epic tracks of Rosalía's, if you're just going off its sparse guitar and handclaps alone. But as I mentioned, there's that cinematic, world-bridging voice of hers, swearing to stay true to an ill-fated lover behind bars with raw emotion. She's a ride-or-die, singing in Spanish lines like "The time you are inside I will wait for you."

Calfornia artist mxmtoon's "fever dream" is a nostalgic song about wanting more than, as she sings, "restless mornings." The '90s-leaning singer-songwriter production and her sweet melodies make sure mxmtoon eventually breaks out of her malaise. She comes out on the other side with an empowered message for her listeners: "Take your time, enjoy it/ Every fleeting moment."

L Devine's songwriting chops shine on "Boring People," a catchy song about the need to break away from routine. "I got my shit together right with the news/ Talkin' the same shit is always boring," she sings before launching into a floaty chorus anchored by minimal stabs of bass and grungy guitar buzzes. The track's unexpected rhythmic shifts, along with L Devine's fresh take on pop songs, are anything but boring.

Alina Baraz's first single of the year, "Trust" has all the elements of a proper James Bond theme song: it's vulnerable, daring, yet somehow, cautious. "I really want to," Baraz sings as the noirish instrumental surrounding her grows more intense. She's withholding the contents of her heart though, exposing her fears underneath going all-in. But isn't that how trust is received? Over time, not all at once? Few singer make being a little guarded sound this sexy.

Every now and then, an artist looking for coverage pops up in my inbox with an unfussy, uncomplicated ask and it catches my attention. New York singer Taquirah Thompson, whose stage name is her first, is one such person. She had three links for recent singles, and an invite to an upcoming showcase at Christies Museum, February 7. (Follow Taquirah here for more info.) As it turns out, tracks like Taquirah's "Rush" are just as unfussy –– a noticeable relief in a time where it often seems everyone is either doing the most or is forever in a hurry. Not that this is bad! But it certainly is a welcome reprieve to hear a gifted rising talent sing about taking her dear, sweet time, with an R&B arrangement that is more Sade than Beyonce. It's a vibe, is all I'm saying, and if you need a chill pill this weekend, Taquirah's "Rush" is one to catch.

15-year-old Beirut singer/songwriter Japan, Man's "Easy Target" is a bedroom-pop gem that provides a snapshot of the teen's knotty internal world. She wrote the track as a way to address chronic anxiety, where self-doubt and overanalyzing takes the place of confident self-assurance. Mission accomplished.