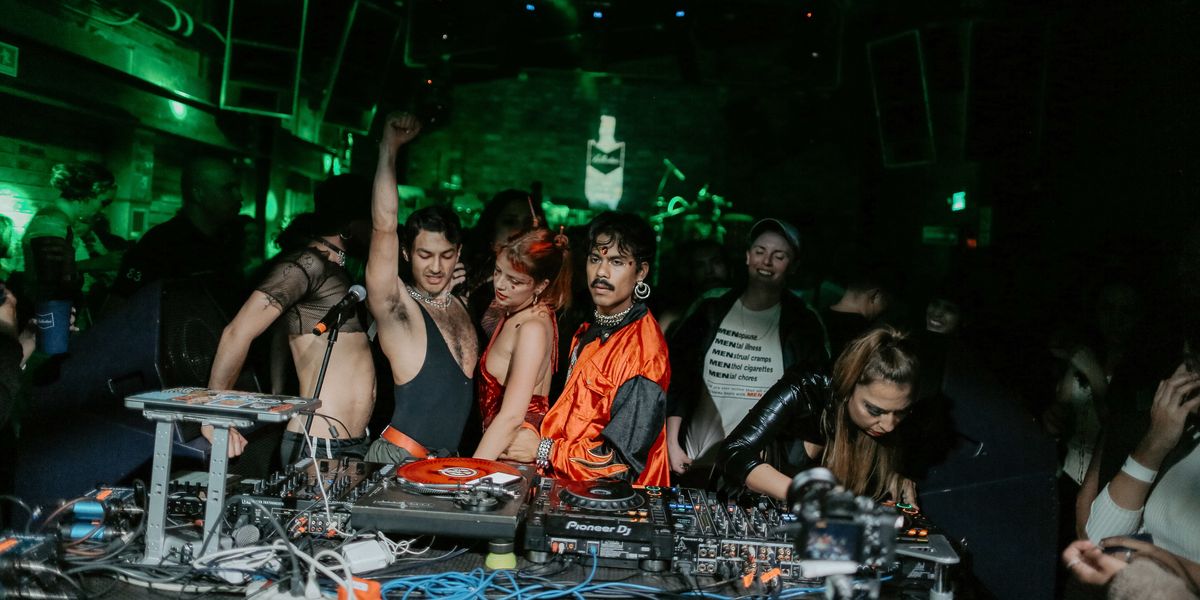 Reggaeton's Past and Future Meet in Bogotá

Ynfynt Scroll AKA Rodrigo Díaz was born in Lima, Peru. He grew up in Dallas making industrial techno beats on his laptop and started DJing at eighteen, after getting deep into the world of synthesizers and sequencing. Ynfynyt Scroll, named after the lack of online pagination, started in 2011. "I gravitated towards immigrant communities, diasporas, and the Latin music scene," he tells PAPER. "But there was also your hipster music community. I always had one foot here and there." Even while devoted to experimental music, the trap and reggaeton of Díaz' city and household were "always in the background." "When you're looking towards something else, sometimes you sort of abandon where you're from musically," he says.

Díaz spent time in Brooklyn before finally settling in Bogotá, Columbia. Over the past three years, he's co-founded Putivuelta, one of Bogotá's first LGBTQ+ party series and music collectives, with his friends K.Hole Kardashian, Sister y Brother and Baby Estupida. The parties cater specifically to trans women, sex workers and others sidelined in mainstream club scenes, often partnering with House of Tupamaras, one of the country's first voguing crews. "All my homies were doing stuff like Papi Juice and China Chalet. I said to myself, why can't we do something similar?," Díaz says. "There are so many high level, forward thinking people here. They were ready for it."

Ynfynt Scroll played the 1 AM slot of Boiler Room x Ballantine's True Music party hosted at the club Kaputt. (Don't worry: this was back in February. Since shutting down operations, Ballantine's has set up a fund offering grant of around $6,000 to music collectives suffering in light of the pandemic.) But back when sweaty dancefloors were enticing not scary, by the time Díaz' set rolled around, the party was a full-throttle queer dance party. Latexed and septum-pierced revelers vogued as Díaz chopped up reggaeton with ballroom, techno, and blaring guaracha, which he describes as "kind of like Columbian circuit house/EDM but very weird and very local."

Situated on the far left-field of Bogotá's nightlife, he admits he was a bit surprised to be booked by the well-known party series. But the Boiler Room x Ballantine's True Music project is specifically dedicated to spotlighting the most exciting, hyper-local scenes. So a takeover by the city's queer underground was a fitting way to end a night that celebrated Colombia's increasingly diverse, free-thinking music world.

Kaputt's dancefloor transformed many times throughout the night. It was a mosh pit, courtesy of rapper and trap artist Ha$lopablito, whose political verses about corruption and real-life scenes of a twentysomething's life in Bogotá have been credited with expanding the subject matter of Latin trap beyond sex and partying. The furiously gyrating crowd submitted happily to local club fixtures DJ Pony and Paquita Gallego's mixes of booty-popping reggaeton, electro-pop, radio hits with injections of Colombia's traditional cumbia. It didn't slow when Afro-Colombian drum troupe Ghetto Kumbe, who fuse traditional African rhythmic percussion with frenzied electronic beats, took the stage, their day-glo wigs jerking.

Reggaeton has long been Colombia's biggest cultural export. The most high-profile acts of the night were DJ Playero, a godfather of the genre, and DJ Pope, producer and right-hand man to J Balvin, one of the artists guiding it towards the future. A quick primer: reggaeton is originally from Panama, born when Jamaican migrants working on the canal set Spanish lyrics to dancehall and reggae's dembow beats. The sound matured in Puerto Rico, where, despite being censored by the government (its dance counterpart perreo translates to "doggie style"), hip-hop and sampling became key thanks to a feedback loop with the Spanish-speaking American diaspora, before making its way to the rest of the world. In 1990s Puerto Rico, Playero produced and distributed some of the most influential mixtapes of the era, including the first ever Daddy Yankee record. He's an old school legend: Playero wore a T-shirt embossed with his own name in rhinestones walking into a hotel for press interviews, later taking the decks in a dad-like zip-up hoodie and baseball cap, spinning classic acts like Wisin, Hector & Tito, Yaga & Mackie, Nicky Jam and, of course, Daddy Yankee.

Meanwhile, as his producer and business partner, DJ Pope has helped architect the career of J Balvin, one of the people Playero paved the way for. Alongside giants like Maluma, Bad Bunny and Karol G, Balvin is defining a new era of mainstream reggaeton, one which delights in weirdness and rule-breaking, whether that means men wearing skirts and nail polish, incorporating southern trap, crooning over 808s or sampling Missy Elliot. His Balvin-heavy set toured the buzziest reggaeton hits of the moment, with nods to legends like Tego Calderon and select dancehall cuts.

Born in Medellín, Pope has been involved in Colombia's music scene for two decades. He and Balvin came up together. Sort of. "We used to hate each other," says Pope. "We would go to the same clubs but I just thought he was this pretty boy kid with all his friends… I was from the hood, with my braids and my baggy clothes. He used to be so clean, like this Daddy Yankee wannabe and shit." They eventually got over first impressions. "It all changed when I heard him freestyle. He was a beast, oh my god." They got to talking. Fifteen years later, they're so close, Pope's never even had a contract. "I'm a part of J Balvin the name. It's me and him, 50/50," he says.

Still entrenched in Medellín's scene via his music collective 574 and weekly cypher open-mics, Pope has had a front-row seat to the reggaeton's recent transformation. He easily remembers a more stagnant time in the genre. "The way the music sounds and the way we look, all used to be the same. You know, the reggaeton guys with the chains. Now it's so many different vibes," he says. "Before it was for one type of target, like for the hood and everything. Now, we want to make it global." It's not just the look or sound of reggaeton that's changed, but also the way it's consumed. "Before we thought we had to sing in English to make it global," says Pope. "Latin artists like Shakira or Ricky Martin had to sing in English. I used to learn English to listen to rock bands. Now, people are learning Spanish because of us."

Like the global reggaeton scene, Bogotá's music landscape has changed rapidly in the past few years. "When I first moved here, there wasn't much going on," says Díaz. "It was very techno-based. Or reggaeton, but like, very normal. Radio reggaeton, which we sometimes call 'officinista,' which basically means people who go from the office to the club. Now, he says: "It's poppin.'" When I first got here, I could not say that." Particularly, Díaz believes, within guaracha (also known as Colombian "tribal house"). "If you were to examine the scene from afar, another Columbian guaracha would stand out to you. It's very vibrant, very productive."

Though they shared the same line-up, Ynfynt Scroll and DJ Pope exist in very different worlds. While J Balvin, with Pope by his side, has conquered the charts, below the mainstream, DIY and underground artists like Díaz are using reggaeton and other traditional Latinx styles as a blank canvas. This world of experimental bedroom producers, highly influenced by internet aesthetics, has been dubbed "Neo-perreo," by Chilean singer-songwriter Tomasa del Real. Still, according to Díaz, it's all taking place on the same creative wavelength. "There's a vibe happening," he says. "Reggaeton was so different before. Now, it can fit itself into all these little spaces it couldn't."