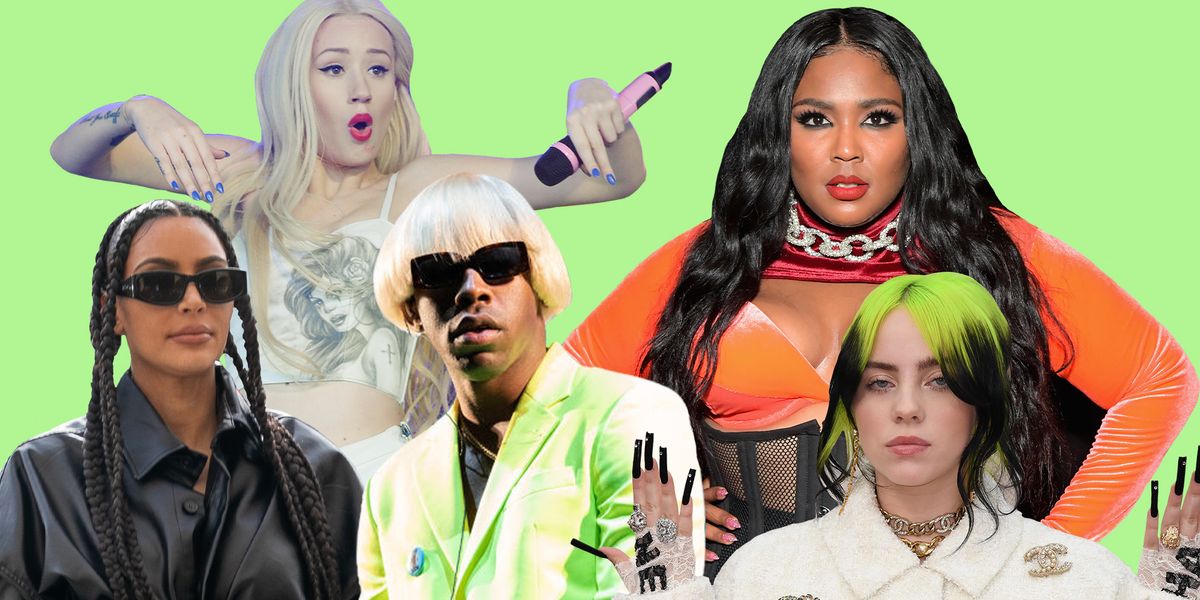 Before Billie Eilish performed the Beatles' "Yesterday," during the Academy Awards "In Memoriam" segment last month, she walked the red carpet in a look that's become something of a signature for her: custom oversized Chanel tracksuit, a chunky, gold Cuban link chain, long black acrylics. Eilish's style defies recent conceptions of what a pop star should look like, and has helped raise her profile. While singers of the Britney Spears and Jessica Simpson era wore tank tops and cut-offs, in a 2019 Calvin Klein ad Eilish revealed she's opted for baggy clothes to focus media attention towards her musical output and away from her body.

Along with her fashion choices, everything else about Eilish's impressive run over the past three years feels like we've arrived somewhere new in pop culture. The 18-year-old's moody music has taken over the world, earning her a No. 1 hit on the Billboard Hot 100 and a sweep at the Grammys. But more truthfully, her success and image didn't come from nowhere. She's been cooking for a while. Eilish began singing and making music with her older brother, Finneas O'Connell, when she was a child. And the buzz around her impressive voice and songwriting potential started years ago, when she released the "Ocean Eyes" at 13 and it caught fire online.

Her fashion touchstones aren't totally novel either. As Eilish's star has risen, many have been quick to point out how much of her image is borrowed from Black pop stars, leading to an ongoing debate over whether she deserves the label of cultural appropriator. The question is a valid one. You'd be disingenuous to not recognize the fact that Eilish and her stylists looks to late '90s and early aughts hip hop as a style touchstone — though her tracksuits and cuban links feel less heinous than Kim Kardashian's cornrows or Iggy Azalea's "blaccent." While these criticisms have merit, the Eilish dilemma speaks to something much larger than a single chart-dominating popstar.

When Eilish was born in December 2001, the No. 1 song in the country was Mary J. Blige's "Family Affair." Outkast, Destiny's Child and Alicia Keys were dominating the charts that year. Jay-Z had just released his landmark album The Blueprint. No argument could be made that hip hop and R&B existed in the margins; no longer the soundtrack of the counterculture, it had gone thoroughly mainstream. The cultural landscape that Eilish and those born after 2000 and came of age in was one where Drake and Nicki Minaj were the hitmakers. And crucially, for the first time in history, the way fans discovered, engaged with and discussed pop culture was entirely online.

What does this mean for Gen-Z, the generation Eilish epitomizes? A study published in the Journal of Broadcasting & Digital Media published in 2010, the year I was a sophomore in high school, found that the TV watching habits of Black teens and white teens were clearly divided along racial lines. I can speak to this divide personally. Back then, I could recognize that the cultural touchpoints that my white and non-Black POC friends have were very different from my own as a Black person. But for Gen Zers like Eilish, the lines are a lot blurrier. And that's largely because of the internet.

According to Nielsen Music U.S. year-end report, 2017 was the year R&B/Hip Hop became the country's most popular genre, largely driven by music streaming. Any time spent on Tik Tok, the video-based social network popular among teens, confirms that hip hop remains king, and continues to drive cultural conversations among teens. Several tracks, like Lil Nas X's "Old Town Road" and Rico Nasty's "Smack a Bitch" even owe bumps in streaming to the app.

Appropriation of Black cultural practices is the story of American pop culture, particularly in music. From jazz and blues to Elvis' swaying hips, Black culture has always been more marketable with a white face. And it continues. Just last year, Ariana Grande faced backlash for her single "7 Rings" and claims of her performance being disingenuous. The internet has escalated this dynamic in ways that we've yet to fully come to terms with — because if the internet does anything well, it's taking complex data and presenting it totally out of context.

This issue came to a head after comments Eilish made in an interview with Vogue, which highlighted just what makes her image and success so frustrating to some. She noted that several artists that she admires, like Lana Del Rey and Tyler, the Creator, excel at making honest music that's nonetheless filtered through alter egos or personas. She made a distinction between this kind of character driven writing, and that of other, less "authentic" artists. "There's a difference between lying in a song and writing a story," she said. "There are tons of songs where people are just lying. There's a lot of that in rap right now, from people that I know who rap. It's like, 'I got my AK-47, and I'm fuckin' . . .' and I'm like, what? You don't have a gun. 'And all my bitches. . . .' I'm like, which bitches? That's posturing, and that's not what I'm doing."

What was likely an off-hand comment from Eilish struck a nerve, not because the sentiment was novel, but precisely the opposite. The artistry of hip hop and the people who make it has always been under question, particularly from white people, despite being a source of obvious inspiration for many white pop artists in particular. Eilish was echoing comments from another pop star, Miley Cyrus, who more freely borrowed from Black culture in her 2013 album Bangerz and her polarizing VMA performance that same year, later moving away from hip hop by painting the genre as not "positive" enough.

What's most frustrating about these comments from Eilish and Cyrus is not just that they demonstrate an ignorance of the factors that contribute to hip hop being able to resonate with so many — racism, social disenfranchisement — but rather the fact that these artists can find inspiration in hip hop and other forms of Black cultural expression, borrow from it, and experience a level of success that young Black artists rarely ever reach. What it also illustrates is that a perceived closeness to Black culture doesn't translate to a greater understanding or desire to understand the lived experience of Black people. Unfortunately for Eilish — who has consistently cited artists like Tyler, the Creator, Earl Sweatshirt as her influences — her role as a pop star has made her a lightning rod, and put her at the center of the debate over who has a right to critique Black culture.

The internet has provided, for white youth who've spent a large part of their adolescence on it, a front seat to the creation and distribution of Black cultural products — Black music, slang and dances. But as those cultural products move across the internet, they get farther and farther away from their original context and meaning and often become collapsed under the simplistic label of "youth culture." This isn't as democratizing as it seems. Apps like TikTok and its spiritual predecessor Vine not only encourage the performance of Black culture by non-Black teens, but incentivize it with real money to be made. It used to just be financially viable for pop stars to perform Blackness. Now, it presents an opportunity to non-Black teens everywhere.

TikTok's dance challenges, like the Renegade challenge, go viral on the app without a whisper of where they came from, which more often than not is a Black creator. The Renegade dance is a rare instance where its creator, Jaliah Harmon, eventually did get credit, after it already took over the world. But this reaches much farther than content posted online. Words, clothes, beauty trends have found their ways from Black mouths and bodies to white ones, at a pace faster than ever thanks to the internet.

Related | Billie Eilish Really Has 'No Time to Die'

Gen Zers and the generations that will follow spend their most formative years online. In the chaos of forming an identity, trying on different masks is an almost inevitable part of the journey. Trends like acrylic nails and Nike Air Force 1s, or words like "fleek" and "deadass," to them, feel native. And they likely don't have the awareness that they're borrowing something — or the language to express it.

Parents of young people now may look back on their high school years and regret the big hair or shoulder pads or flannels or whatever fashion mistakes they made in their youth. For their kids though, it'll likely be the problematic TikTok trend they participated in or, even worse, something like "blackfishing."

But for Black people, this connectedness has led to opportunity. Whole genres of music like soundcloud rap have been born entirely out of the internet. Social movements like Black Lives Matter were able to flourish due to the ability to connect online so easily. Vine and Instagram and Dubsmash have presented opportunities for exposure for Black creatives of all kinds. But they don't exist in a vacuum. White teens are just as connected as ever as well. Which also means they have access to information that even their parents didn't. Thanks to blogging and social media, Gen Z is surely the most diverse and socially conscious generation in history. They may be part of the problem, but they are also the best equipped to become informed enough to untangle these uneven power structures.

As for Eilish, or any young internet-savvy creator who has grown up on the internet where people of color set the trends, it's clear that Black artists have served as huge influences to her creatively. Hopefully she finds the language to speak to all the ways she's been influenced by them.