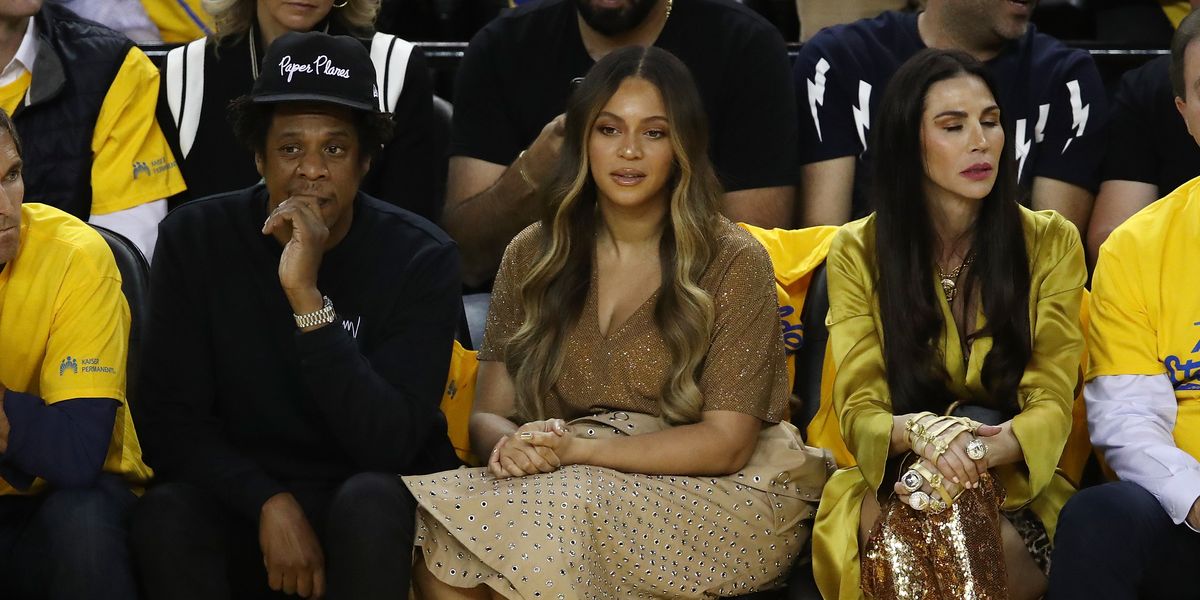 Let's be honest: we are all Nicole Curran at last night's Golden State Warriors game. As the wife of the Warriors majority owner, Curran was kindly sat next to the King and Queen of the Universe, Jay-Z and Beyoncé, for Game 3 of the NBA Finals against the Toronto Raptors. Curran naturally wanted to make conversation with the two powerhouses, leaning over during the game — in sparkly golden thigh-high boots, no less — to chat up the couple.

Judging by Beyoncé's reaction, however, the chit-chat was not exactly welcomed with open arms. As Curran leaned over to talk, mainly to Jay-Z, Beyoncé's face reflected the full gamut of human frustration, from denial, to annoyance, to finally, acceptance. The Beyhive was immediately enraged by the interaction, demanding that Curran step off or at least acknowledge the Queen B.

Later on, Curran posted a photo to Instagram of herself and Beyoncé sitting courtside, with Curran appearing to be zhuzhing up Beyoncé's beige dream of an outfit. The caption of the photo reads, "We should all help and support each other," however it isn't clear just how much Beyoncé appreciates the help in the moment. She's just trying to watch the damn game!

In the moment, Curran did what we all would have done, which is take advantage of the proximity to the Carters and make some light courtside convo. While no one can be sure what exactly was talked about, let's hope Curran took full advantage of the moment and asked the only question that matters at the moment: where's the damn album?

Despite an embarrassing barrage of articles on various gossip websites calling Curran "Becky with The Good Hair" and making wildly false claims about the interaction, the one win to come out of this is the world's discovery of Curran's Instagram account (before she went private). On the way to the game last night, Curran posted a photo of her boots with a quote from the hit musical Hamilton, feet up on the dashboard of an unknown car that we probably can't afford. So chic. It's not the first time she's posted a fab shoe pic either; some of her greatest hits belong in the Wendy Williams Shoe Cam Hall of Fame.