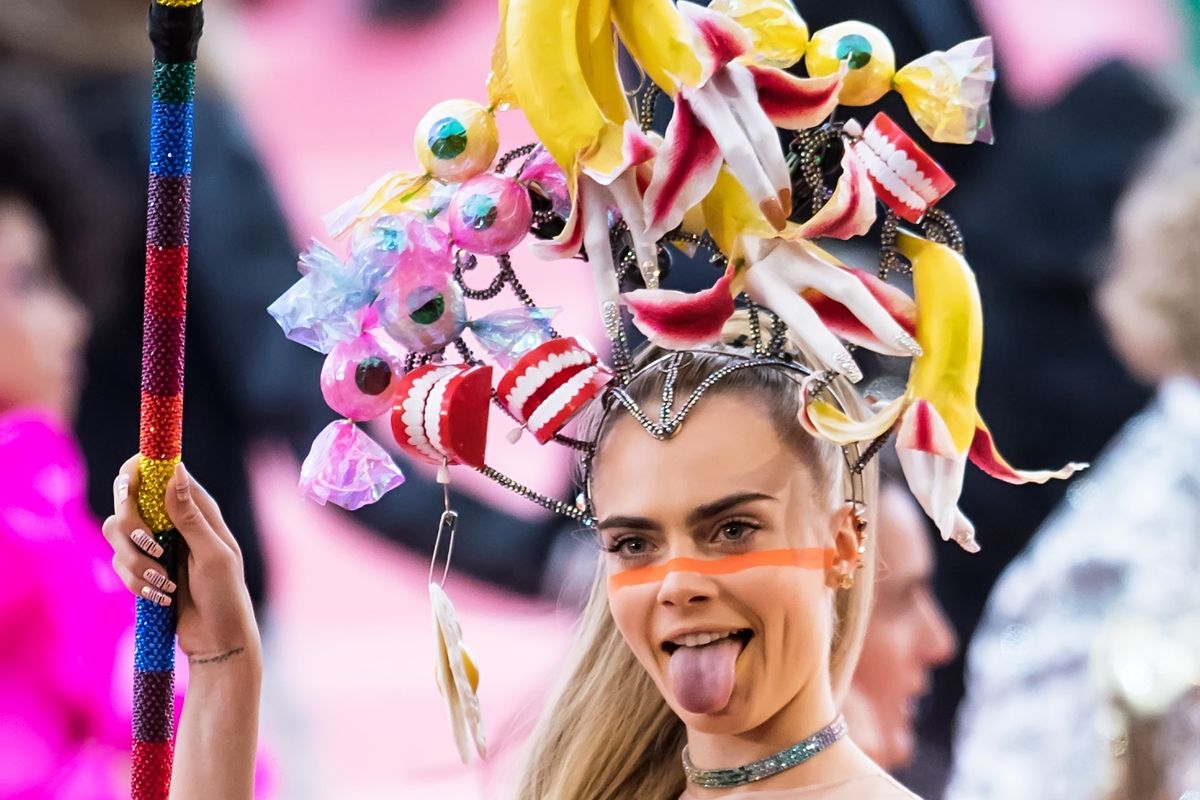 When clicking through endless post-Met Gala coverage, it's easy to overlook the details. Sure, there are some obvious accessory standouts from last night's red carpet — Harry Styles' single pearl earring, Gaga's telephone, Jared Leto's severed head, Serena's tennis ball-colored Air Force Ones — but everyone else's thoughtfully chosen purses and hair clips and manicures got a little lost. When the theme is literally "Camp," feathers and fringe tend to override everything else.

Zoom in a little though, and kitsch accessories were the secret standouts of almost every outfit. There were colorful bags, dramatic headdresses, and Yeehaw cowboy hats galore! Our favorites, below.

Technically, Solange's python didn't make it to the party last night — the Met's little-known reptile ban must have come into effect. Luckily, we got to see them hanging out on Instagram. Knowles, ever the perfectionist, even incorporated a reptilian manicure into her custom Salvatore Ferragamo look.

Frank came dressed as a Prada-clad security guard last night, or perhaps some form of private detective. The Nikon would make more sense, in that case. We hope to see some light leaked red carpet chronicles on Instagram soon! He wasn't the only celebrity to cover his own Met Gala — Hailee Steinfeld also brought photography equipment along last night.

This high Camp ensemble provides many fun details to consider, but we love Nyong'o's hair moment (by Vernon François) the most. Are those fists on the handle of her Afro combs? Take note. Totally divine.

Kacey Musgraves was a Barbie pink girl in a suitably Barbie pink world last night, thanks to Moschino. Her hairdryer handbag is so good! Those sunglasses, too.

Someone had to go Priscilla Presley last night, and we're glad it was Lily Collins. This jumbo Alice band takes her bouffant down a few notches, from runway to runaway bride. AKA made it Camp! It's exactly what the night called for.

Ashley Graham was an early red carpet arrival, and a dazzling one. Those are Gucci clips to complement the rest of her Dapper Dan tribute.

Cara's Pride colors are the headline, here, but we're also fans of her headdress. Bananas + false teeth! Why didn't anyone think of this before?

Yes, she wore her own Andy Warhol portrait as a gown. Then, as if that weren't Camp enough, turned it into a glitzy Lady Liberty look.

The night's best manicure, and there was plenty of competition.

Anderson .Paak served us Cowboy Camp, in one of the night's many memorable Gucci 'fits.

Should she have wished to chain smoke like her character in Russian Doll, Natasha Lyonne was prepared. Yes, the purse is shaped like a prescription pill. She's wearing Jean Paul Gaultier.

A light-up Tommy Hilfiger Cinderella gown isn't complete without the matching carriage. Belle of the ball!

The Pink Friday hair, the plumage, the CLEAVAGE. Lizzo gave us a lot to love last night, and she didn't scrimp on the small stuff, either. This glittery Lichtenstein manicure is genius.