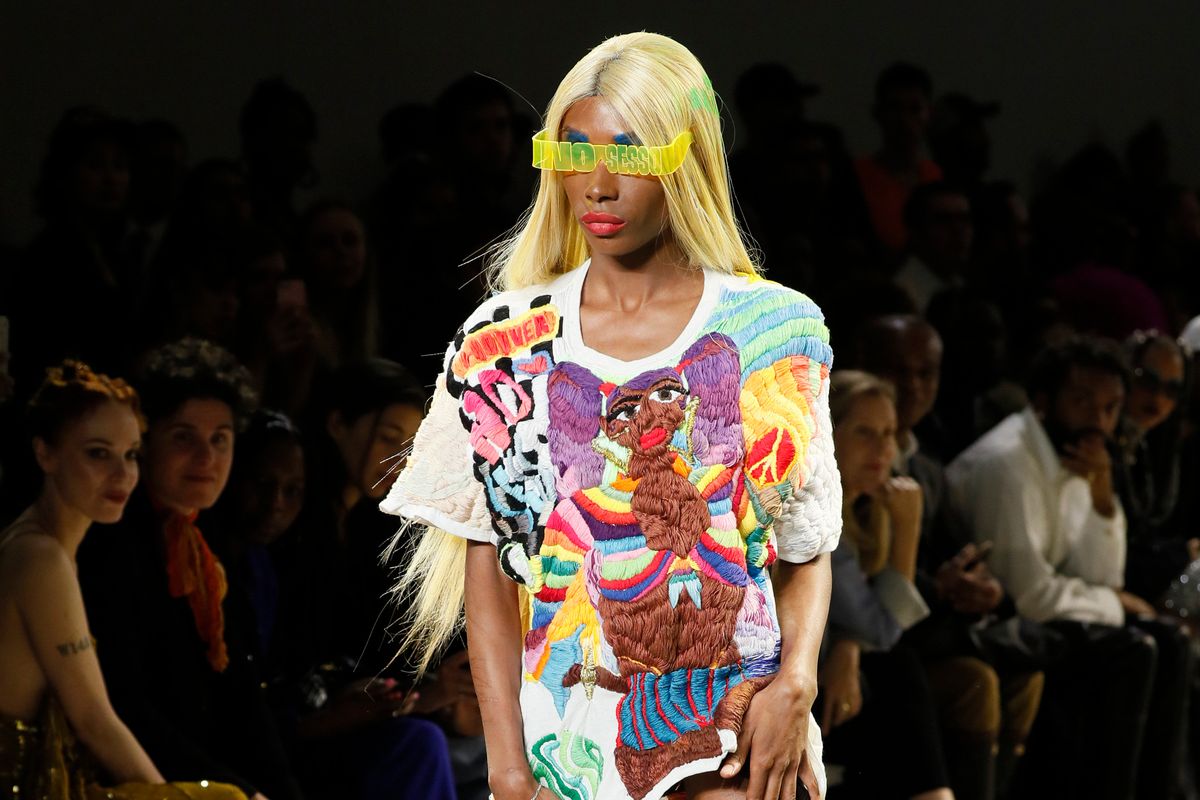 Los Angeles designer Pierre Davis made history last year, along with her co-director Arin Hayes, as the first trans woman to send a collection down an official NYFW runway. The duo behind NO SESSO returned to the runway this year with an equally inclusive, and even more stunning and wearable collection.

Related | NO SESSO's Sophomore Show Was More Wearable Than Ever

The show, "I'd Rather Rescue Myself," circled around the figure of a matriarchal deity named Valentina. Models, who looked like a squad of superheroes, channeled Valentina's ferocity, independence and sense of liberty in the relaxed silhouettes of gorgeously embellished tie-dye smocks, rompers, printed sets and flowing halter gowns.

Last season was very business, very structured pieces to wear to work and take on the world," Davis told PAPER. "It's very different this season. "'I'd Rather Rescue Myself' is for the empowered womyn to wear when she's not at work."

Davis and Hayes turned to their friend, Arielle Baptiste — aka Bapari — to collaborate the soundscape for Valentina and their superheroes, off-duty. Bapari is a Haitian-American DJ who mixes beats for LA's queer club scene, as well as playing drums in femme/queer punk band Fuck You Pay Us. They also mix for artists like Saturn Rising, Taliwoah, Banoffee, Oscar Key Sung and Davia Spain, and are currently in a residency at the LA performance collective NAVEL.

Bapari's mix is bombastic and eviscerating. They created the effect using industrial, clubbed out edits of (on-theme) tracks like Beyoncé's "Save the Hero," Lil Mo's "Superwoman," and (the show's namesake) Cheetah Girls' "Cinderella." The tracks are stitched together in a cohesive narrative, using poignantly jarring transitions and recurring clashes, gasps and moans that conjure excitement, sex, danger and power.

PAPER chatted with Arielle about soundtracking one of NYFW's most exciting moments, and their upcoming gig at lesbian party Slather.

How did you connect with the NO SESSO team, and end up up doing this mix?

We're all friends from back in L.A. I've done a few music things for them in the past. Last year, me and my friend, The Uhuruverse made a song for their first show in New York, and earlier this year, I did a collaboration with my friend Davia Spain for their most recent show in L.A. They approached me for New York Fashion Week this year and said they wanted something a bit more clubby.

Pierre Davis is the first trans woman to design a collection for NYFW. What does it mean to you to work with such a groundbreaking, inclusive brand?

It's a really big honor. I really respect everything they do. I respect all the people that are part of their team. I think Pierre is a bad bitch: a really courageous and strong person who's just shredding her way through these glass ceilings. And really being very representative of people who are often overlooked.

What was Pierre's prompt for you, or what were your conversations about the sound of the show like?

We talked a lot and went back and forth a lot. It was very collaborative. Obviously, the show was titled "I'd Rather Rescue Myself," so there was a superhero theme that was very prevalent. We were telling a story — the energy Pierre conveyed to me was that she was trying to tell a story of "I'd rather rescue myself." Basically, you're going to rescue yourself, you don't need anyone else to do it. "I'd rather rescue myself" is a quote from a Cheetah Girls song, the line leading up to that line is "I don't want to be like Cinderella/ Sitting in a dark cold cella/ Waiting for somebody/ To come and to set me free." You're not gonna wait for someone else to pick you up, despite the odds in your way.

What vibe were you trying to capture on this mix, and what are the different ingredients?

Pierre and Arin [Hayes] curated the song selection and gave me references from pop culture and and quotes to help elevate it. From there, they gave me the freedom to do my thing from a production standpoint. There are these funny quotes and candid snippets that are very real and relevant to the team's everyday lives and sense of humor. I was inspired especially by the Beyoncé edit I was making, the song goes, "Who's there to save the hero?" That was the first edit I worked on, and that put me in the state of mind to create the rest of the mix. A big thing Pierre wanted was to include motorcycle sample, sirens and dogs barking, all to elevate and bring some intensity to the transitions but also to represent chaos and pace of the team's lifestyle. They definitely had a vision for they wanted, phonetically. It was about intensity, it needed to be hard-hitting — attention-grabbing. Industrial elements. A great deal of intensity to be conveyed. Arin was adamant about making the music exactly what they wanted, regardless of how the audience would feel (circling back to the theme of paving your own shit).

Do you have a favorite look from the collection?

I liked the printed shorts and the matching jacket, the most, cause I dress pretty simple. All of it's fire. Obviously.

What do you think makes a successful runway mix? How was the overall experience and response to the show?

Definitely cohesion. Pierre, Arin and the team had given me these ideas and certain elements and songs they wanted in the mix, but making it sound like it was one composition, as opposed to a track list of a bunch of different songs, was one of the big things I wanted to do. Transitions have to be smooth, but also creative. You don't want them all to be the same. There were certain samples — the cars revving, the dogs barking, certain songs and vocal edits, that would come back over other songs. The mix needed to tie back together as one continuous story — referencing back to itself. Whether people really notice that or not — it's supposed to be a subconscious thing, where these elements you've heard before, and are a little bit familiar with, make their way back to the mix and give it that cohesion and embellishment.

What else are you up to this fashion week?

Last night I DJ'd with some homies from LA: Foreinger, Kaili and Luke Kim for Luke's party Directory that he brought from LA. Tonight, I'll be at No Bar, for the girl party Slather. So ya'll better pull up!