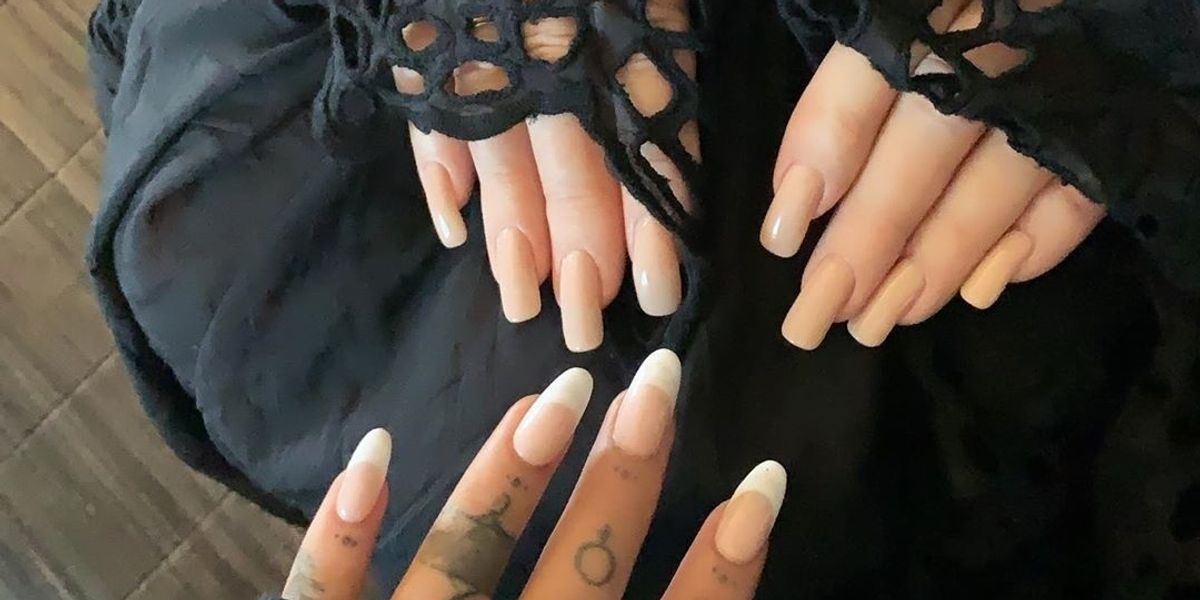 If you want to make it big in music, invest in some eye-catching acrylics. The biggest names across several genres are staking brands on their hands right now, from Rosalía to Billie Eilish, the latter, more androgynous artist making a rare deviation into diva territory via some slime-green witch spikes. (She kept things punk by accidentally ripping off her real nail during a removal process and sharing the gruesome photos with fans.)

Last year Cardi B and her glitzy talons were profiled by Harper's Bazaar in the rapper's favorite Bronx salon. Her latest commercial for Reebok Classic returns to a similar strip mall location, and features some impressive nail art CGI. Just yesterday, up-and-coming cabaret comedienne Cat Cohen spoke with Into the Gloss about her casual nail routine: "I go wherever — literally whatever cheapy place is just there." Then we learned via Instagram that Barbra Streisand and Ariana Grande had cemented a new friendship over manicures.

As you might expect, Babs went for classic square filing while Ari opted for softer cloud emoji-esque ovals. Her "small barbecue grill" hand tattoo is sadly shielded from view. The younger singer is clearly wearing one of her signature oversized hoodies, while Streisand is rocking some Stevie Nicks-ish funeral garb. The nails look clean, expensive, and professional — a far cry from the budget shellac jobs that us mere mortals are putting down $25 on during our lunch breaks.

This alliance has been years in the making, and there's a lot you can read into it. For Grande, a geeky musical theater kid stuck in an R&B starlet's body, hanging with Babs is literal childhood wish fulfillment. "A lot of my friends are partiers, but I've never really clicked with that," she told Cosmopolitan back in 2013. "I like Barbra Streisand, and when was the last time you saw Babs getting, like, turnt up?" Hey now. What's more turnt than cloning your pet, or constructing a shopping mall in your basement?

We also know that Ariana's a regular re-watcher of Legally Blonde, recreating its iconic nail salon scene for her viral romcom-stuffed "Thank U, Next" video, complete with Jennifer Coolidge cameo. Legally Blonde establishes the nail salon as a chapel of female friendship, so we can safely assume that when Grande and Streisand's respective PRs were setting up the date, it was Ariana who first suggested bonding over mani-pedis. Streisand's cute caption implies that things went well, and that the two will likely keep in touch. Although it seems notable that Babs went for a grid post and Ari only featured the moment on her story. A subtle power play.

For her part, Streisand appears to enjoy meeting famous fans — one likes to imagine she usually has no idea who they are before a minder makes introductions, and that's as it should be. According to her prolific Instagram account Babs has recently posed with Mariah Carey, the Clintons, Barack Obama, and Lionel Richie. But none of those names received a nail bar invite that we know of.

All in all, it's pleasurable to be privy to such a meeting of minds and vocal chords as this. The only disappointment is that both divas went with neutral pink polish — a way-too-subtle choice in 2019 that's frankly beneath them. Give us gilded claws or nothing!