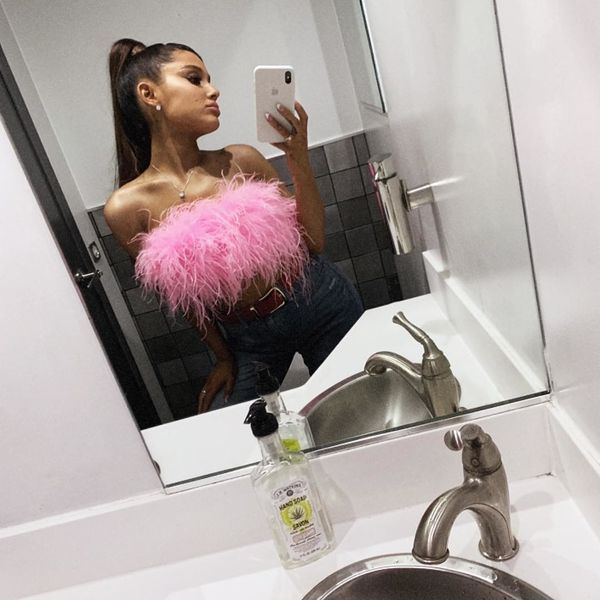 In the grand spirit of #ThankUnext, Ariana Grande has reportedly donned a new diamond, replacing Pete's $93,000 pear engagement ring with a subtle friendship ring. The new jewel, visible in the above selfie, sits on her ring finger, right where the old one used to be: a symbol of her steamy new love affair with this girl named Ari.

Based on an Instagram story showing her and two friends' hands titled with the caption, "3/7," Ari wears one of a set of seven that she's distributed among her girl gang.

Members of this exclusive sisterhood include, Page Six reports, style/travel influencer Alexa Luria and Chicago singer Njomza, a signee of Mac Miller's label Remember Music, who have both shown off their bling on Instagram.

Ariana has also recently shared a photo of a cozy sleepover with Courtney Chipolone and Luria, and one of dancers Victoria Monet, Tayla Parx, who helped her perform her First Wives Club-styled Ellen performance. More potential members of the chosen seven?

As we know, post-Pete, she "spends more time with my friends," and she's been leaning heavily sleepover and girl power iconography to celebrate her budding romances with herself and her friends. We've already seen teasers of the "thank u, next" video, hinting that it'll reference girl power classics like Legally Blonde, Mean Girls and 13 Going on 30. She's taking a well-rounded approach to the girl power canon, revealing today that Bring It On is also among the inspiration for her new content.

However, some fans believe suspect that the rings hold even more symbolism. Many speculated upon its drop, that the alphabet scrambling train arrivals board featured in the "breathin" video, offered snippets of the tracklist. Words like "Imagine," "Needy," and "Remember" can be made out. This would be right up the pop star's alley, given that she shared the Sweetener track list in the "no tears left to cry" video.

Fans are now claiming to have unscrambled the letters to reveal the full tracklist, including one song titled "Seven Rings."

Well, we'll have to wait for the album drop (any day now?) to find out if we have a friendship anthem coming our way, but for now we're cheering on Ari and her girls.