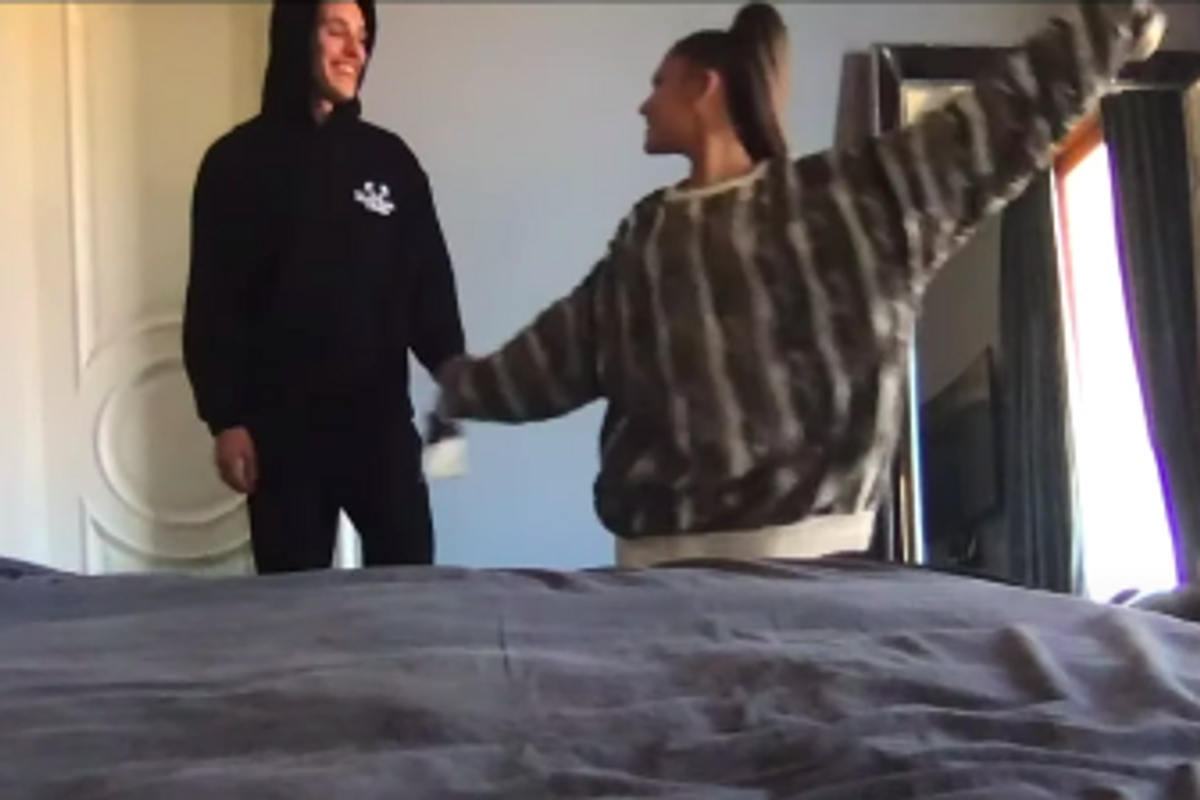 It's official! Girlfriend culture icon and spokesperson Ariana Grande is officially with boyfriend, once again. (Not the same boyfriend she made a song called "Boyfriend" with, to be clear). Confirmed by an appearance in the video for her new quarantine single with Justin Bieber "Stuck With U," the singer is dating a man named Dalton Gomez.

The mushy slow-dance duet (proceeds go to the First Responders Children's Fund) is questionably about wanting to stay in quarantine forever with your honeys ("I'ma get to know you better/ Kinda hope we're here forever," croons Bieber). The video features a collage of fan-submitted clips of regular schmegulars doing cute stuff in quarantine (swaying in prom dresses, cuddling with dogs, blowing out birthday candles etc.) in their normal people homes. Sprinkled in are celebrities like Joan and Frankie Grande, Chance the Rapper, Kylie Jenner, Kaia Gerber and Jaden Smith hanging out in mansions (please clock the Biebers' massive Drew-branded Cheerios dispenser).

The tea spills in the very last clip. While the Biebers make-out, Ari dances and hugs a mystery man. Or a would-be mystery, if TMZ hadn't caught the couple PDA-ing in a bar in February. Gomez is a luxury real estate agent Southern California. He doesn't have a direct entertainment industry connection, however according to his company: "Mr. Gomez now holds one of the largest rolodexes of A-list buyers and is already connecting many high profile deals across the city." So it's not too hard to imagine how he and Grande crossed paths. He's also been spotted hanging with Miley Cyrus. Maybe now he's hanging with Ari, he can give Justin Bieber a hand with his real estate holdings.

Related | Pete Davidson Talks About His Break Up With Ariana Grande

Well, it's clear Ari's over her bad boy phase. You might say she "learned from the pain!" Or did she? You may notice that Gomez looks like Wall Street Pete Davidson with the tats magic erased off… the height, the cheekbones. Make of that what you will.

Only time will tell if Gomez is a rebound or the real deal. The couple is socially distancing together, and have reportedly been dating for two months. "Stuck With U" marks their official couple debut. It seems unlikely Ari will be sharing much more of Gomez, who surely is appealing to her partly for his low-profile. A source told People: "Ariana doesn't want to do another public relationship so she is trying to keep this one quiet, but she seems very happy with Dalton."

"Sharing special, personal life things that make u happy on the internet can be truly traumatic," Grande wrote on Instagram to Florence Pugh after the actress chastised fans for making fun of her 45-year-old boyfriend Zach Braff. "I know I've taken a step back from doing so to protect my loved ones and myself but I just wanted to share this and let u know how perfectly u expressed this and how appreciated u are for doing so @florencepugh."