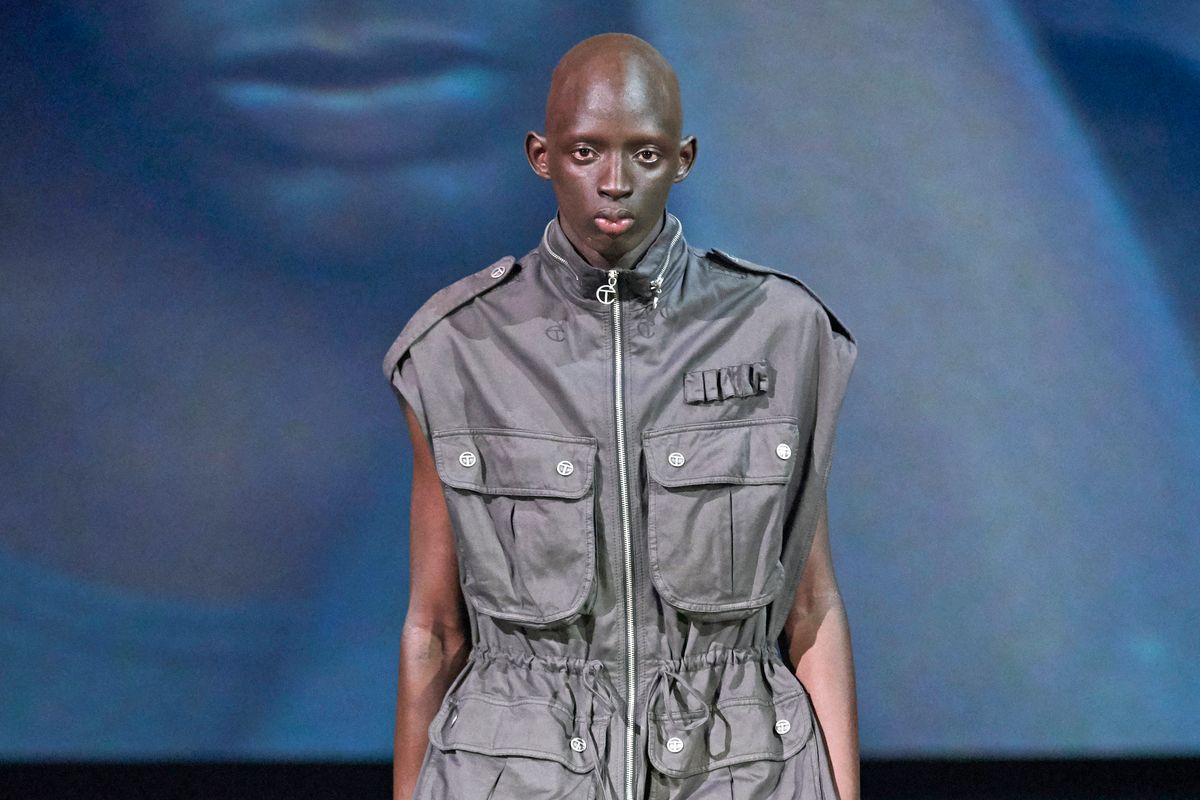 Have you heard that the world is ending? It is! The climate strikers are running around asking for a merciful future for Leonardo DiCaprio's baby girlfriends; politicians are nightmares; it's fall and the weather in New York is set to hit 90 degrees on Wednesday. Hope is a dangerous thing for a woman like me to have — and I don't have it! Rising seas, take me away.

Politics can be a dangerous thing for fashion designers to meddle with. Some do it adeptly; more make meaningless faux-woke slogan t-shirts produced by children in Bangladesh (and those are the ostensible liberals — it's even funnier when conservative values creep in, like all those Ayn Rand t-shirts that they still sell at Brandy Melville). Fashion is an industry that pollutes the environment and exploits workers at all levels; enjoyment of it comes from the beauty, the fantasy, the artistry.

But fashion, as many have said before, doesn't exist in a bubble, and designers get inspired by current events, bleak though they may be. It's not universal — as Sarah Kent and Zoe Suen wrote for Business of Fashion, the London shows generally seemed to take a break from "political navel-gazing," largely ignoring the incomprehensible mess that is Brexit. Milan shows were mostly about Italian glamour, minus the straitjackets and Foucault-quoting show notes at Gucci. But in New York and Paris, designers were getting ready for the end.

There were some sickos — Bstroy, a "neo-native post-apocalypse streetwear brand," made headlines for making sweatshirts inspired by the worst elements of our current dystopia, i.e. school shootings (hoodies with Sandy Hook and Columbine logos were emblazoned with bullet holes). But most brands were far more thoughtful. While the Andreas Kronthaler for Vivienne Westwood Spring 2020 show in Paris seemed to mainly focus on the fantastical (the show notes described closer Bella Hadid as a "naked Fifties pin-up, photographed from below, looking like she's in the sky with puffs of cotton wool thrown on her"), the brand's recently released men's Spring 2020 lookbook stayed true to its history of protest and cries for sustainability; models were positioned underneath signs with slogans like "What's bad for the planet is bad for the economy."

For the past few seasons, Marine Serre has explicitly stated that her clothing is inspired by the impending end of the world as we know it. "It's after the apocalypse, a group of friends are underground — a community coming together. It's a safe zone in which a new world is being created, a future world, a new way to see fashion," she said of her Fall 2019 collection.

For Spring 2020 (titled "Marrée Noire," oil spill in English), the designer expanded on the theme, dressing survivors of the climate wars (including dogs) in her trademark "futurewear." The clothes, made from largely upcycled fabrics, were chaotic utilitarian — the show began with black, militaristic garments, including a jumpsuit worn by an older, angry-looking (sexy) Frenchman who looked prepared to lead some sort of hacker revolution.

The Telfar spring 2020 show looked to migrants and immigration policies; models walked while a film played that featured TSA screenings and airport interrogations. And the opening looks were practical, clothes you could theoretically wear in the wake of global geopolitical collapse; designer Telfar Clemens showed four variations of cargo pants in a row. Cargo pants, which are both a callback to the Bush years and a garment that you could theoretically wear while on the run from fires and water wars, have been everywhere: brands ranging from Gypsy Sport to Maryam Nassir Zadeh (two downtown New York labels that have basically no aesthetic commonalities) have included them in the spring collections.

Utilitarian garments seem like an appropriate response to the climate catastrophe (they're also outdoorsy – I guess we should all get outside and hike while we still can?). But they have another point of origin: lesbian style.

Sorry to generalize, but lesbians, as a group, represent some of the chicest trends of all. Lesbian aesthetics are vital: tailored suiting, Prada shoes, Vacancy Project haircuts. But ancient stereotypes of lesbian dressing could be seen in the spring collections, like the cargo pants and practical footwear (Tevas and Crocs have been trendy for a minute). You could see echoes of dyke camp.

In her popular 2018 essay "Notes on dyke camp," writer Mikaella Clements defined her theory of dyke camp, "a specific brand of humor, manners, and sensibilities guided by lesbian identity."

"Rather than drag, which parodies what is real dyke camp takes the real and magnifies it, so that it becomes absurd or funny or simply attractive in its own right," Clements wrote. "Dyke camp is a Walkman, a pair of Adidas sweatpants, the paintings of Kelly Beeman with their glazed sleepy stares, and Janelle Monáe's PYNK video with its vagina pants. Big silver thumb rings are dyke camp, as are certain brands of gardening gloves; for obvious reasons, dyke camp tends to favor hands."

Designers may cite depressing forms of inspiration as opposed to queer aesthetics when it comes to their garments with zippers and pulleys and big pockets. But as Clements wrote, "the more you look for dyke camp, the more it seems to show up. Prowling, smirking, swaggering — and usually already looking back at you."