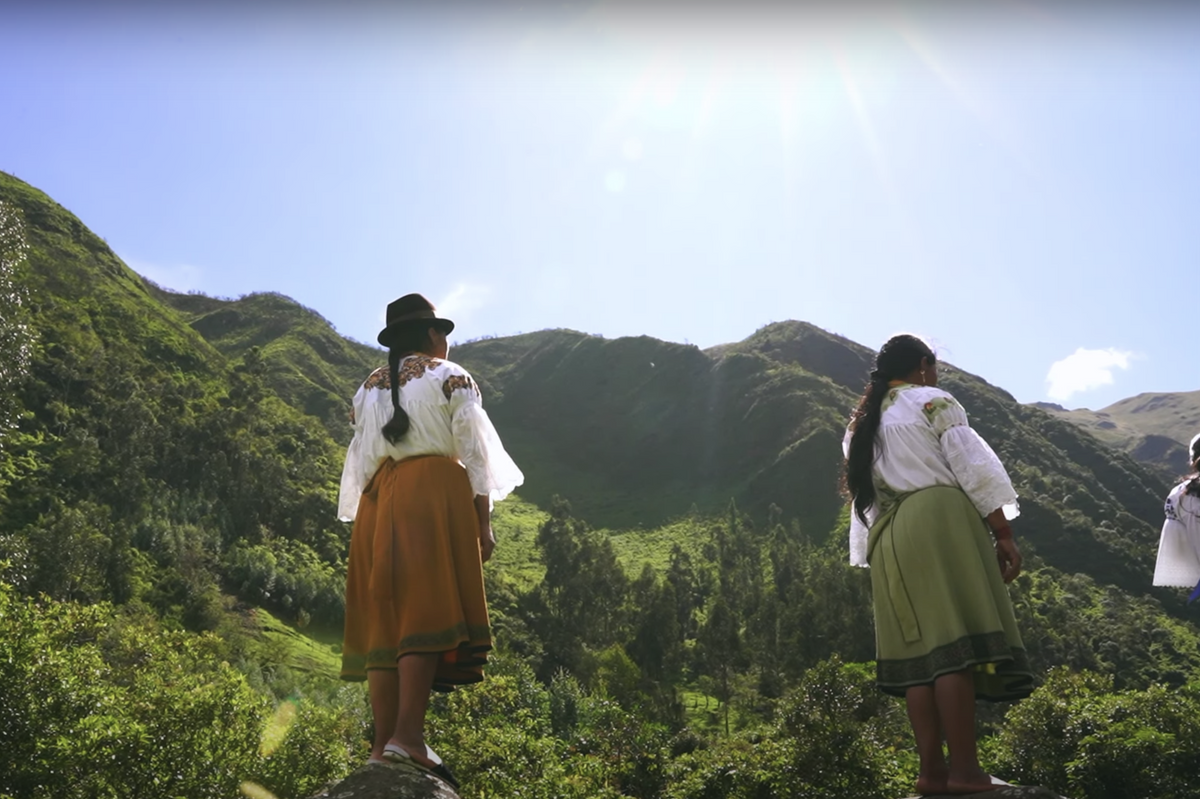 There are roughly 2.5 million local artisans in Ecuador, most of whom rely on year-round tourists to sell their handmade wares to. But with COVID-19 continuing to wreak havoc on the travel industry, many of these indigenous communities found their core incomes all but depleted this year.

In the northern province of Imbabura, located in the Andes mountains, there are dozens of native female embroiderers who have been affected by the pandemic. Allpamamas, an Ecuadorian clothing and accessories brand that launched this year, recently set up a jeans drive to support the women from this region, turning pre-worn denim into embroidered bucket hats that pay each artisan a fair wage. (They also created a fund that will finance eye doctor appointments and glasses for embroiderers in need.)

The initiative is one of many under Allpamamas, who works with a team of eight female artisans and has implemented several projects to help maintain their salaries. The abuelitas (or grandmas) utilize design techniques passed down to them from generations, from using natural fibers and upcycled materials to organic dyeing recipes. This allows them to stay and preserve their craft in the countryside rather than having to leave their land in search of employment in the city.

Allpamamas is the brainchild of Maria Puente Silva (who is Spanish) and Vanessa Alarcón (Ecuadorian), who met by chance several years ago through a mutual friend and bonded over their shared love for Ecuador and its traditions. After feeling burnt out from working in fast fashion, Silva discovered a passion for the country's history and textiles.

"I started to investigate more about it, and I spent two or three years traveling around and learning some processes, and some textile patterns, dyeing and other things that I love," Silva tells PAPER. "And for me as a designer, it's always been about the materials. Since I was a little girl, I fell in love with the patterns, and the fabrics and the colors."

For Alarcón, this experience was also in many ways about finding herself as someone shares ancestral lineage with the country. "It's like we kind of try to find our own place — me as an Ecuadorian, but I'm very much white passing — trying to find what my identity here really means," she explains. "And for Maria, being Spanish and also feeling so much at home in Ecuador, and having made this land her home, and interacting with women from a completely different culture that we have so much in common with — it feels like the whole project is extremely experimental, and it's so much about our own identity and exploring as just women, working together and spending time together and feeling each other."

Among the design techniques the artisans used are Ikat (100% hand-woven, plant-dyed cotton), pedal looming and hand-spun wool, a method that in many places is almost extinct. On its e-commerce page, the name of the artisan who made each item is listed under each description as well as the location of where it was assembled and finished.

Tránsito Noques and Estela Cacoango, for example, are the brand's go-to embroiderers (the latter has been with Allpamamas since day one), while Carmen Orellana is a 5th-generation weaver from the Bullcay, Azuay province. She was even awarded the Excellence in Artisanship prize by UNESCO and was involved in establishing Ikat weaving as Immaterial Cultural Patrimony of Ecuador, which protects the craft from appropriation by other groups.

The brand recently shot a two-minute video that captures the scenery and community of women artisans complete with stunning landscapes and close-ups of the land they inhabit. "We were thinking about shutdown, seeing nature's resilience during human reclusion," said Valentina Pozo, a New York-based image-maker from Quito, Ecuador who put together the film. "It had us thinking about the elements, which are, in Andean cosmology, the spirits of creation, which would be earth, fire, water and air. And paying homage to that through experience as a team. So, it was very ceremonial."

While the journey of bringing Allpamamas to life has been a spiritual quest for many of the women involved, it's also been ultimately a lesson in starting a business. "I think, it was extremely evident from the start that this needed to be a co-creation," said Alarcón, who had a job in innovation consulting in the process of starting this company. "So, we started experimenting with how this co-creation looks like, and we ended up applying all this design thinking knowledge that I had to, specifically, co-create business models, and working methodologies with each of the communities of artisans that we work with."

"I think there's a misconception that artisanal work can't be scalable," she adds. "And it's my belief that it's because the people who design that model didn't design it in a way that fits the day-to-day of the artisans. There are so many artisans that you can 100% scale, and it shouldn't be a problem. And that's what we're trying to prove through our business, and in the future, share with others."