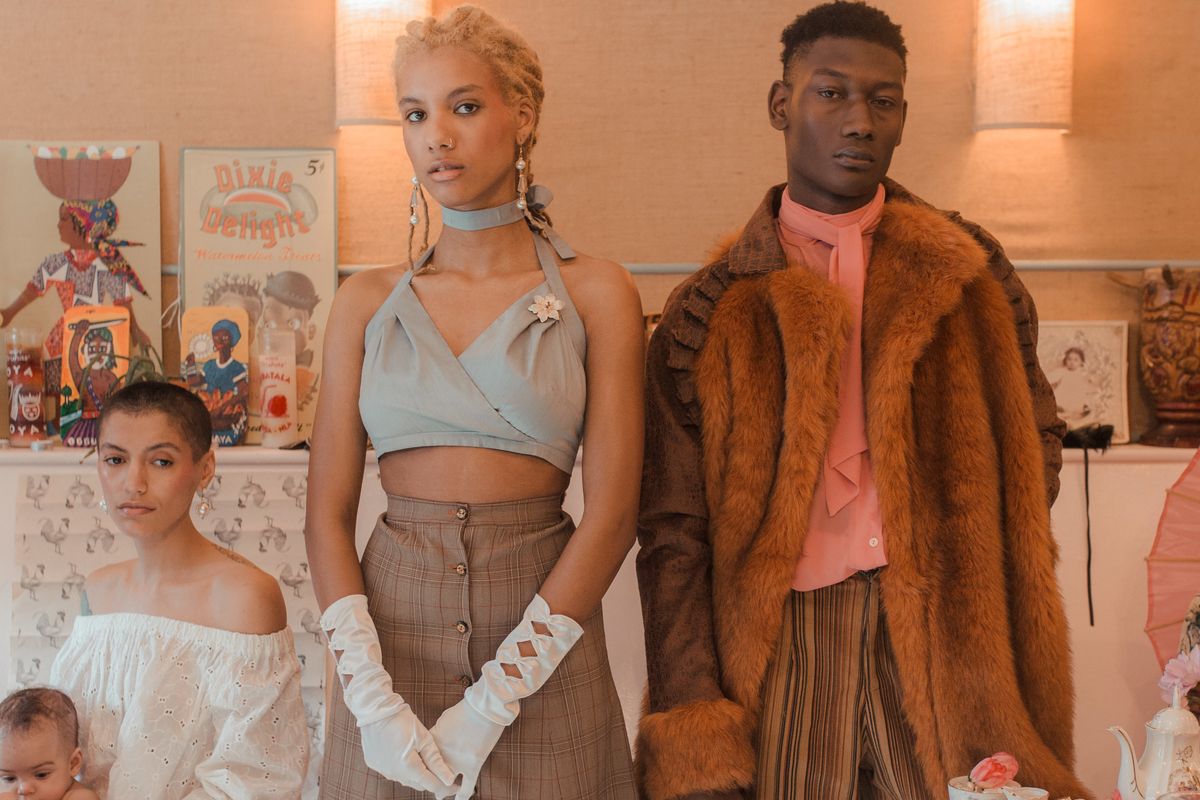 House of Aama Channels Its Roots

Akua Aama Shabaka is ahead of the curve, already known at 20-years-old for her extravagant Afrocentric street-style and her many modeling appearances (from numerous Vogue features to Alessandro Michele's Gucci's Pre-Fall 2017 campaign film). The Parsons design student has gained a significant following on social media, which coincides neatly with the new ways in which we digest the carefully curated collections and moments at New York Fashion Week. Now, Shabaka is ready to show off her talents beyond being a muse for coveted luxury house.

Akua Shabaka is amongst an age of designers who have opted out of the traditional fashion calendar system. Shabaka and her mother Rebecca have even flipped the new See-Now-Buy-Now culture on its head by releasing the collection " BLOODROOT" on Black Friday, and showing it during the following fashion week. "We felt 'BLOODROOT' needed to exist beyond the digital landscape and we wanted to bring our support into the world of the rootworker," said Shabaka when asked about the decision to place the clothing on sale before presenting. She presented her first collection, "BLOODROOT" from her brand House of Aama during 2018 NYFW.

PAPER spoke with Shabaka about social media, goals for the future and the challenges of being a young black designer:

Tell me a little bit about your brand House of Aama and why you started it.

My middle name is Aama — it's Egyptian which is why our logo is a hieroglyphic symbol. My mother and I were going just to have it be a hieroglyphic symbol,as the name of our brand but we decided to add House of Aama above it as it would be more comfortable for people to recognize. Aama means "the benevolent one" or "one of kindness." So it means House of the benevolence.

I started my brand when I was fifteen, around the same time Instagram began to take off. Initially, it began as an Etsy shop where I would resell vintage clothing with a few custom pieces here and there. I would make a post on Instagram wearing one of the items I was selling on Etsy, and people responded to it.

How has your social media presence played a part in the success of House of Aama?

Social media is such an interesting thing. I noticed at Parsons there are a lot of talented students, but they have no idea how to present and get their clothing in front of the right people which is vital when you're getting a clothing line off the ground. I try to use my online platform to market and push my brand while creating a following for it. I know if people are a fan of my online persona they might be interested in House of Aama.

With my brand, though, it's not solely about social media. Publications have begun to pull from us for shoots regardless of how many followers we have online because of the quality and craftsmanship. The quality of the garments is fantastic, and as House of Aama continues to grow, I hope people fuck with it because of that.

What made you decide to make the shift from being an Etsy shop with few original pieces to crafting an entire Ready-to-Wear collection?

After a year we decided to expand House of Aama by offering original designs that mixed urban silhouettes with traditional African fabrics and opened up a vending booth at Afropunk Festival in Brooklyn. We also collaborated with Senegalese artisans and donated the profit back to them. After doing all of that, we knew it was time to rebrand. We spent a lot of time brainstorming and crafting our new vision. My mother and I knew we wanted our designs to stay culturally rooted, but we needed to elevate and freshly express our heritage. We didn't want to lose the voice of our people, and that's how we came up with "BLOODROOT."

What does "BLOODROOT" mean?

It's named after the rare herb bloodroot which inspired the collection. My mother's family has been using the bloodroot herb as powerful guardian for the family. The collection is also an ode to Southern Creole spirituality and African Roots.

How did you keep the cultural authenticity of House of Aama while translating to a high fashion audience?

In the past year we changed our lens and design aesthetic but held true to our values. We are still using African fabrics in our collection, and our clothes have become more refined. We researched the silhouettes worn by Creole people in the 1900s and repurposed them for this collection. The clothes we crafted are timeless and nostalgic which resonates with fans of the brand. We feel with "BLOODROOT," everyone can feel comfortable in the clothing.


As a young black designer with a very black collection, what has this journey been like for you?

[ laughs] Whew! Well, in the past it's been so good! As a young black designer a lot of people hesitate to take you seriously. Though I'm fortunate enough to be doing well, the reality is that if my brand was based in white culture and if I was a white woman there would be a lot more access to different fashion spaces. Ultimately, I feel black designers have to work a lot harder to push their brands and to be taken seriously.

With my journey as a designer, I'm so excited to see how this is going to go because I was on one trajectory for three years, and in the past year we've decided to rebrand and change our course. We have so many new opportunities since we placed "BLOODROOT" for sale on Black Friday. Lately, I've been taking a more significant interest in the business side of things. I've been trying to figure out how to translate press into sales and get my clothing into department stores. I think it's cool when an artist can sustain themselves from their craft and that is the goal with House of Aama. But, overall I'm just trying to stay positive in everything that I do! I'm super excited to be working and just want to see where all of this goes.