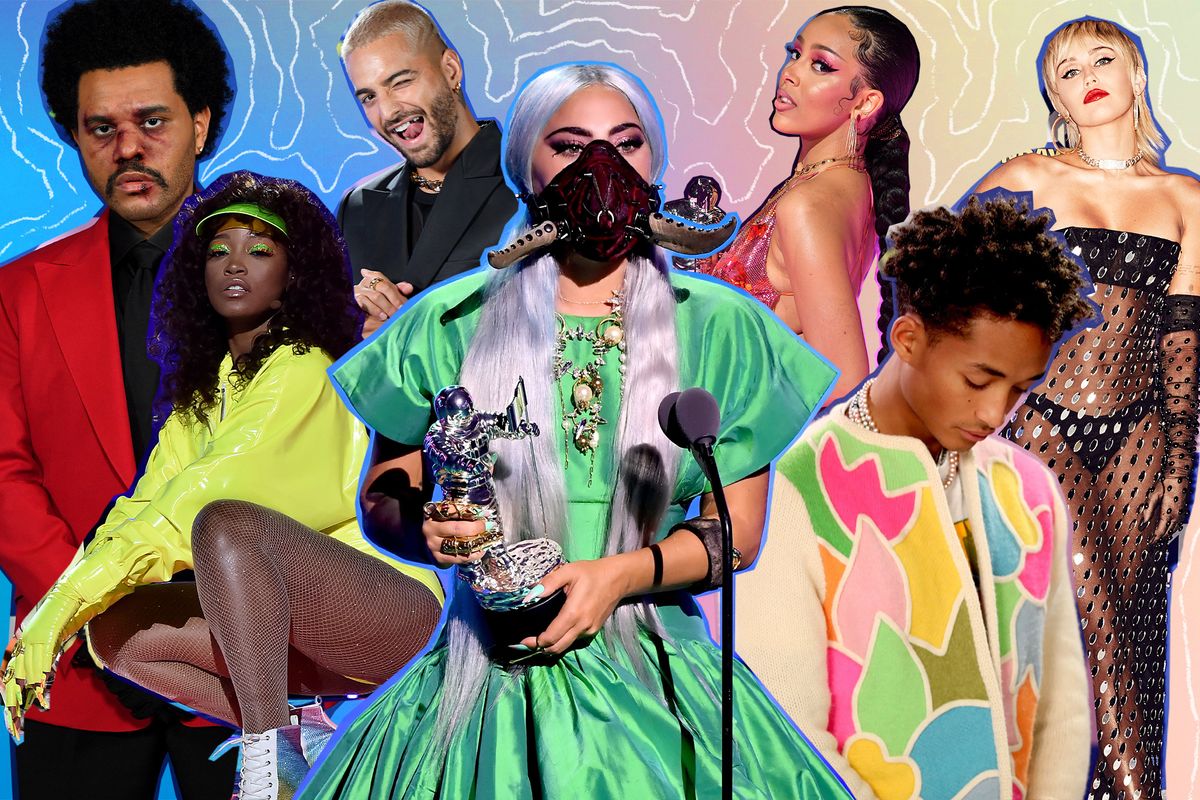 The Vast Emptiness of the VMAs Red Carpet

A red carpet amidst a pandemic? "Sounds very 2020... let's do it," thought the brains at MTV, who enacted a "show must go on" directive for this year's Video Music Awards. The show was held on Sunday night at Brooklyn's Barclays Center, sans audience but with plenty of pre-taped crowd cheering. Host Keke Palmer dedicated the ceremony to Chadwick Boseman during her opening speech, and she wasn't the only one seizing on the opportunity to make the night more meaningful. "It's really hard for me to celebrate right now and enjoy this moment, so I'm just going to say: justice for Jacob Blake and justice for Breonna Taylor," The Weeknd shared after winning video of the year and best R&B for "Blinding Lights."

Beyond that, the night might as well have been renamed the Video Gaga Awards. Lady Gaga picked up five moonmen, including Artist of the Year, Song of the Year ("Rain On Me" with Ariana Grande), Best Collaboration and Best Cinematography, along with the newly minted MTV Tricon Award (possibly a renaming of the Video Vanguard Award, which was not presented last night). Cementing the "fashion" category of her tricon status, Gaga showed out in nine looks, one for every nomination.

Look 9: A graphic MTV T-shirt and shoes by Pleasers.

The whole spectacle was a triumph, a victory lap of sorts with elements of oddity accenting looks that always felt fashion and never costume. Particular attention should be paid and respected to the CJR look, which felt like a pointed meeting of two of the creative world's most spirited minds. She wore the dress. But also, the dress wore her. It offered up balance. It was a sort-of fashion tête-à-tête that we were all lucky enough to be privy to. "I'm speechless," Rogers wrote on Instagram. "One of the women who've singlehandedly inspired me the most and allowed me to dream about what fashion could be, and what fashion can do, is wearing something my team and I dreamed up just a few months ago in a fashion-week fury."

Versace was also in abundance on the carpet, maybe too much so. Maluma wore a bespoke Atelier Versace black suit with the house's signature Medusa details; Doja Cat wore a Spring 2020 (again with the last season) mini-dress enriched with jungle-inspired embroidery; Joey King wore a Pre-Fall 2020 mini-dress in a neon tie-dye rose print.

On the men's side there wasn't much. Jaden Smith wore a Chanel-like cropped sweater jacket that featured jeans with a shrewdly placed crotch rip, pink sunnies and platform New Balances. Eye-catching and chic, but ultimately unmemorable. It was very "if Jonathan Anderson directed Joseph and the Amazing Technicolor Dreamcoat." The only other competition came courtesy of Machine Gun Kelly, in a bright pink Berluti suit from Kris Van Assche's Fall 2020 collection. He looked good. I prefer Andrew Scott's crimson-red double-breasted Berluti suit with the layered shimmering pink silk disco shirt that he wore to the 2020 SAG Awards. In comparison, MGK's look feels rather unremarkable.

A part of me wishes there were more looks to talk about, to conjure the excitement that red carpets once brought about, but the lack of stars only served to underline the reality that we're not quite ready for an awards show in this capacity. Had Gaga not shown up last night, we'd be left talking about DaBaby's D*lce & G*bbana hat, Supreme jacket and Louis Vuitton shorts. In other words, we'd have nothing. And maybe that is how it's meant to be for now.

Of course last night wasn't awash, with Gaga encouraging folks to wear masks — "It's a sign of respect," the Tricon pronounced — and celebs like Palmer and The Weeknd using their spotlight to recast focus away from the spectacle and back to the real-life issues that pervade. But for now, despite a "NOW OPEN" sign, the red carpet remains an empty walk.