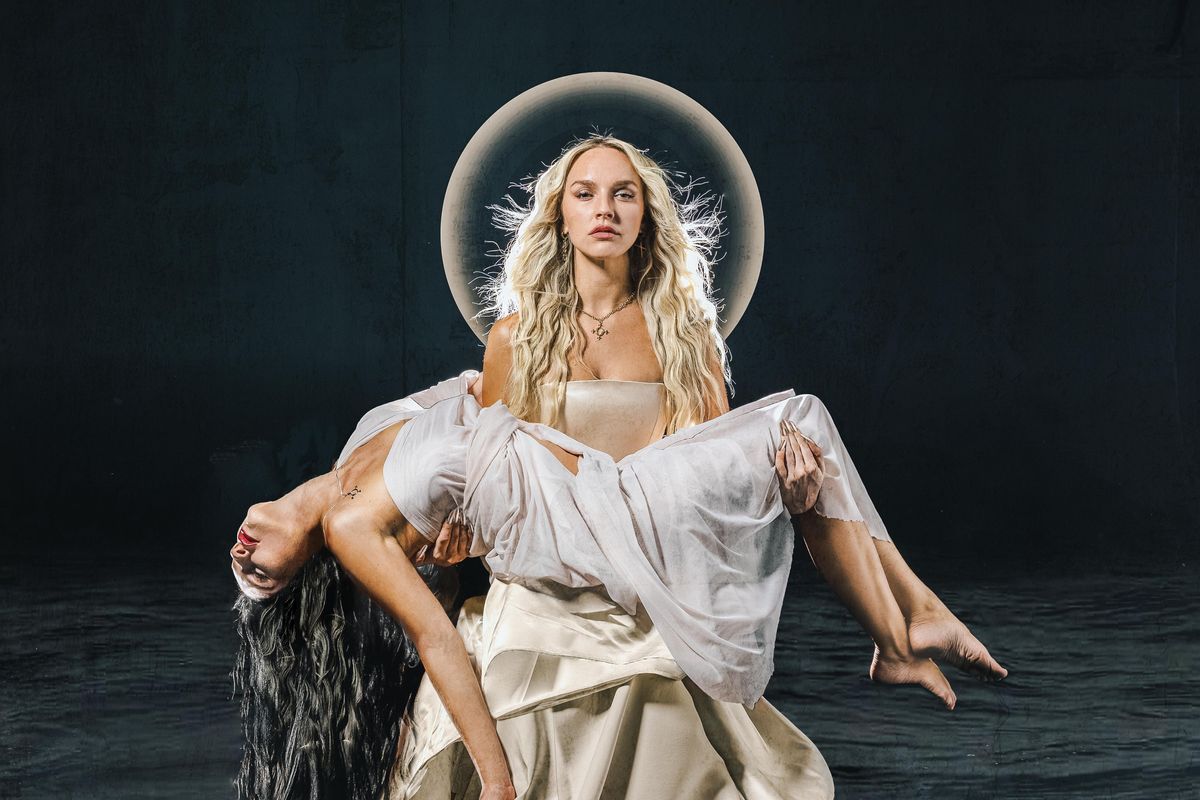 In a pop landscape often built on smoke and mirrors, Zolita has consistently chosen to be transparent about the most intimate details of her life: The ups and downs of her queer relationships, her progressive stance on politics and the details of her witchcraft practice. Since launching her career in 2015 with the viral video "Explosion," (which now has over 16 million views), Zolita has proven herself not only to be a talented singer-songwriter and director (she creates all of her own visuals), but also a woman courageous enough to be vulnerable with the public. And her debut album, Evil Angel, is as radically honest as ever.

As one of Zolita's exes, I can speak to the fearlessness of her frankness. I first met Zolita just a month before she released "Explosion," at a mutual friend's birthday party at the Bowery Hotel in New York. We were the only two guests who didn't adhere to the lingerie-themed dress code and bonded over feeling extremely out of place. She was a bewitching, ambitious young woman on a mission to fill a gap in pop cultural representation through her work, and determined to be the artist and role model that she (and so many other queer women) didn't have growing up. There was never a doubt in my mind that she would succeed.

Although our romantic relationship ended in 2016, we have remained lifelong friends. Over the past half decade, I watched Zolita's career evolve and cheered her from the sideline, as she reached new professional milestones. I read the heartfelt messages of gratitude she received from young queer kids around the world, as her videos and songs gained further traction. I listened over FaceTime as she described the labor and intricacy required to make her music videos for "Holy" and "Fight Like a Girl." I streamed her sophomore EP, Sappho, and all the following singles, which signaled new chapters of musical maturity and confidence. I watched her turn heartbreak and pain into empowering anthems, and saw her perform them on her first national tour.

Related | Christine and the Queens Was Born to Rule

And during the lockdown this spring, I relished in her excitement, as she tackled her most ambitious creative project yet: a 10-minute short film, called Evil Angel, which inspired her to complete and release her first debut album of the same title.

"The album, front to back, is about a toxic relationship with a sociopathic person," Zolita told me over one of our marathon FaceTime sessions. Although Evil Angel's arc is broadly inspired by her last longterm partner, it draws from many experiences across multiple relationships. "My hope is that people will find a song they can relate to, no matter what kind or stage of relationship they're in."

Evil Angel opens with bright tales of infatuation: a '90s R&B-inspired track, "Bedspell," and an astrology-inspired bop, "Loveline," both of which speak to those exciting initial stages of a crush. While the sound remains dance-driven, Zolita changes thematic course towards the middle of her album, exploring the darker themes in abusive relationships, like manipulation in "Shut Up and Cry" and gaslighting in "Mad," before climaxing in a tale about betrayal with "Truth Tea."

Everything culminates in the chilling, namesake track, "Evil Angel," a cautionary fairy tale that explores the complex link between fear and intrigue in toxic love. "It's about knowing someone is a bad person and wanting to be with them anyway," she said, capturing the crux of the entire story in a few graceful lyrics: "So many signs I saw, but didn't see/ I'm colorblind/ A red flag is waving in my direction/ Still I need to be, your puppet on a string."

Related | Elliot Page Is Out: Here's How Hollywood Should Cast Him

In the minimal and synth-free ballad "Oblivion," Zolita grapples with heartbreak and her need for an apology, before ripping into the infectious track "Gone Girl," when her sadness is quickly eclipsed by rage. Evil Angel reaches a poetic conclusion with a moving, acoustic song called "Orchard Street," which harkens back to her childhood spent playing bluegrass guitar. Listeners are introduced to a healed artist, who has relinquished her victimhood and entered a new space of gratitude, for the lessons she learned.

She explained to me her favorite lyric, "I find the silver lines, rosy glasses every time." To Zolita, this is "representative of my outlook on life more so than the relationship," she said, adding that "it's about forgiving myself for existing in that relationship for so long."

Sonically, Evil Angel belongs to witch-pop, a genre that doesn't formally exist yet. "Witchcraft is such a big part of my life, and played a huge role in me getting over that break up," Zolita said. "It has definitely influenced the lyrics, sound and aesthetic." She distilled the spirit of a once so-called "fringe" religious practice into a democratically appealing and contemporary sound, ranging from mystical and light to sensual and haunting. Evil Angel is a story first and foremost about queer love, but it's also a monumental moment for magic, which has long been a safe haven for LGBTQI+ communities.