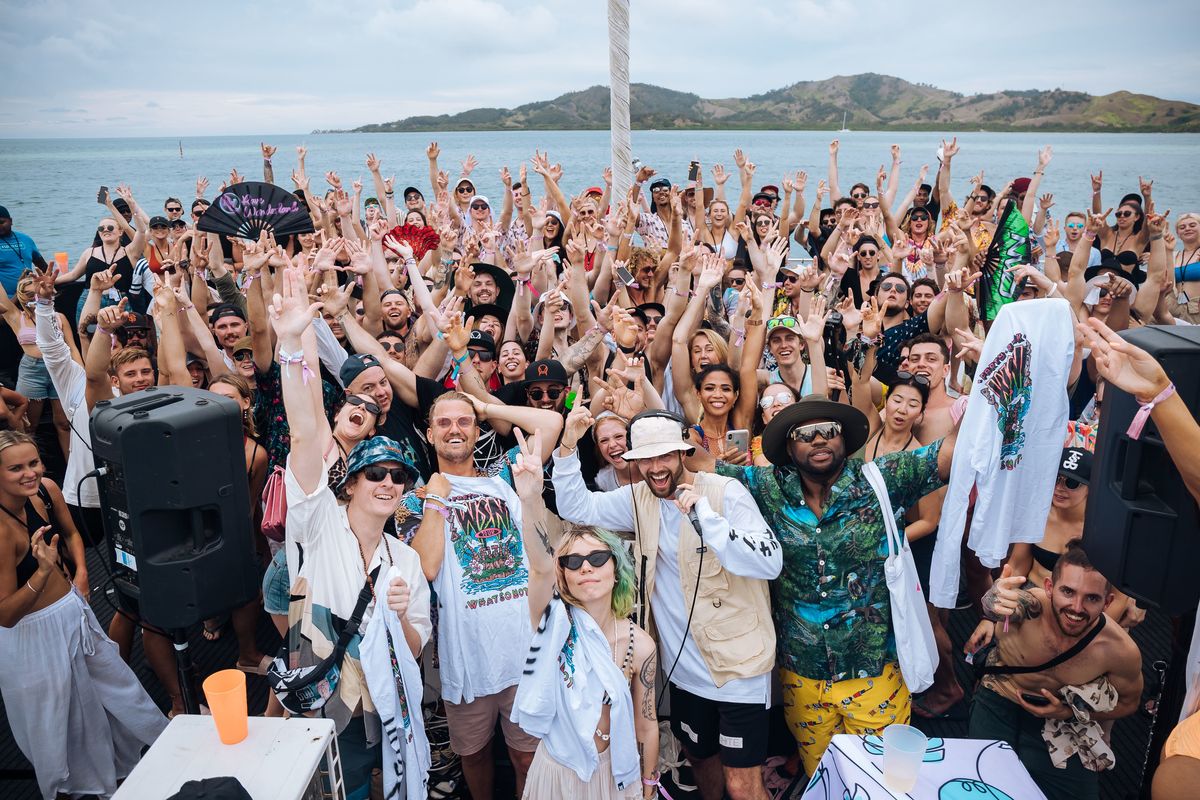 Between the white sand beaches, lush green palm trees, and crystal clear aquamarine blue water, Fiji looks more like a postcard than it does real life. It might just be the sweltering tropical heat talking, but you could almost swear the colors in Fiji are a little more vivid, the sunsets a little more magical, and the pace of life a little bit more relaxed. A literal slice of paradise, it's no wonder that a few hundred die-hard ravers fly south to the Mamanuca Islands each year to take part in the aptly named boutique electronic music festival Your Paradise. Taking place over five days in December, Your Paradise practically sells itself: intimate DJ sets, private island beach clubs, and even the chance to jump off the side of a barge-turned-floating-bar in the middle of the ocean.

But Your Paradise isn't just a midwinter escape for attendees. For the DJs playing the festival, it's a welcome end of the year vacation from their busy tour schedules. "Your Paradise is one of the most unique shows I play each year," says South African-born Australian DJ/actress, Dena Amy. "Between its mind-blowing location, intimate sets, and fun loving crowd it continues to prove itself as a bucket list party for both artists and fans."

For Your Paradise veterans like Mija, the festival has become something of a working retreat. "I go back every year because the people who organize it are amazing humans, and the resort is literally paradise," she says. "It's a great way to wrap up the year and escape from the typical DJ club world, while still getting to play dope music with my friends." Outside of their advertised timeslots on the main stage, it wasn't uncommon to see much of the festival's lineup walking around the resort having drinks with fans by the pool, heading out for a snorkeling excursion, or even trying to catch the midday surf. There were so many impromptu back to back sets that they practically became the norm, from A-Trak hoping on the decks with the LA based Night Bass crew or Öona Dahl and the Desert Hearts crew's Lee Reynolds holding it down beachside deep into the early morning hours.

For first-timer Mikey Lion of Desert Hearts, Your Paradise easily won him over, "the music was poppin', the surf was epic, and the combination of the local Fijians and festival goers made [it] one of my favorite parties this year. Bula!"

This year marked the first time that Your Paradise had opened the festival to American and New Zealand markets, offering flights from Los Angeles and Auckland in addition to their usual host of Australian cities. "Americans brought a whole lot of energy to the event which was great to see," says Your Paradise co-founder Hadi J. "They also came with a sense of discovery and an eagerness to take in Fijian culture and understand how the event ran. They were extremely respectful and appreciative of what we're trying to create."

With a significant increase in attendees and a renewed commitment to reducing the festival's carbon footprint as much as possible, this year's edition came with a whole new host of logistical problems as well. "Fiji being a country of less than a million habitants means we have to fly or ship in most infrastructure," explains Your Paradise co-founder, Ignacio Garcia. "Amazing support from partners like Fiji Airways allowed us to fly in over two tonnes of equipment. We also shipped in local timber and infrastructure to the island using Fiji's biggest barge." Garcia goes on to mention that in an effort to offset the festival's growth the team brought in an extra 40% to their volunteer team as well as donated some of the proceeds to the local Mamanuca Environment Society.

Relive all of the sun-soaked fun of Your Paradise in the gallery below (and if the FOMO is just too much, pre-registration is already open for 2020).

Photos courtesy of My Media Sydney