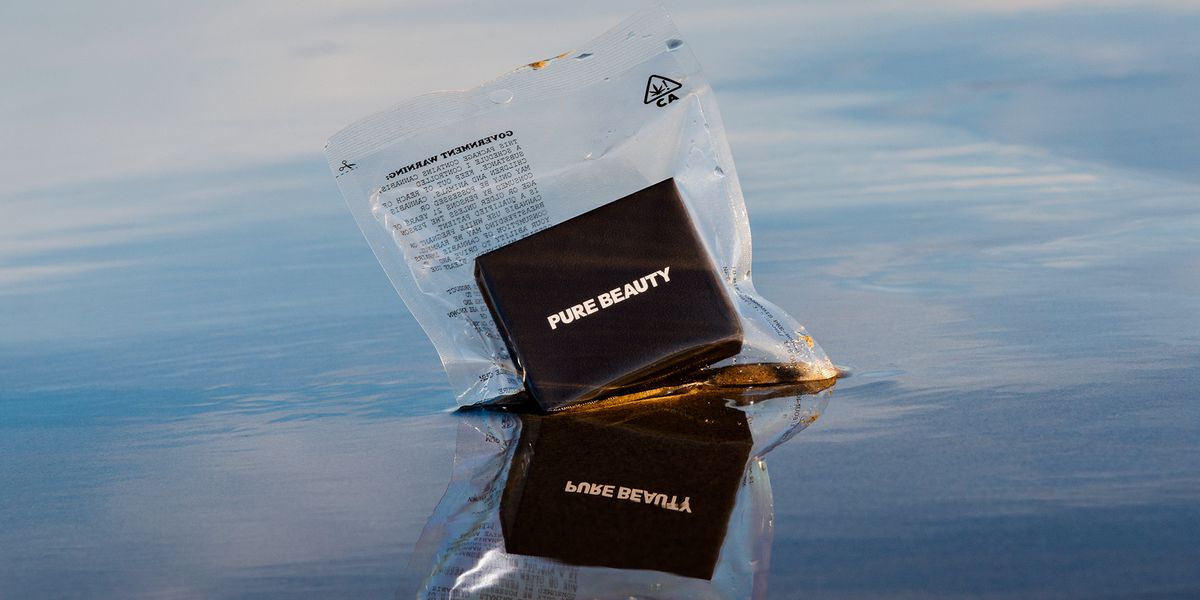 Why Do Weed Products Look so Luxe Now?

Thanks to a new generation of chic weed and CBD start ups, cannabis is ready for its close-up. But think less Mr DeMille, more Peter Lindbergh. In honor of 4/20, we're taking a look at the ways cannabis is ✈️ luxury.

The fashion world has had a long love affair with smoking, for better or worse. In 1966, just as tobacco companies began targeting female consumers, Yves Saint Laurent created "Le Smoking," a black tailored tuxedo with satin lapels intended to repel ash. For Louis Vuitton's Fall/Winter 2011 show, Kate Moss strutted down the runway puffing on a cigarette. In Love Magazine's 2016 Advent calendar, Bella Hadid wore workout gear with a cigarette hanging flaccidly from her lips. But cigarette smoking has lost its cultural luster, probably due to the slow collective understanding that smoking, y'know, kills — and the industry has taken note, albeit slowly.

Enter from the wings: cannabis. But not just the marijuana leaf iconography beloved by your red-eyed college roommate. These days, cannabis products have replaced stoner imagery with minimalist, high end design aesthetics. Even longtime weed icon Snoop Dogg has hopped aboard the luxury pot train with Leafs by Snoop, which features sleek packaging and a bright color palette. It's cannabis… but make it fashion. While gadget-like portable vapes are nothing new (the first boom hit in 2013), with increased legalization of recreational cannabis and new research into the health and wellness benefits of CBD comes stiffer competition and new products altogether, like cannabis-infused beverages and skincare.

So how does one make an impact in this crowded new market? To para-quote Gwen Stefani in "Hollaback Girl": B-R-A-N-D-I-N-G.

"From people who don't care what they smoke, to people who will only smoke the finest, like fashion, cannabis is interesting — because there are all different types of consumers," says Dr. Dina, the inspiration for Nancy Botwin on the Showtime series Weeds. "Today it's all about how to stand out among the hundreds of cannabis companies on the market. Why smoke a regular preroll when you can buy a lux one with a glass filter and beautiful packaging? It's no longer about the strain of the cannabis variety, it's about the label."

And as a result, a new crop of suppliers are emerging with gusto. Whitney Beatty, who founded her brand Apothecarry (which sells "high quality, high-end herb & tobacco accouterments for the discriminating connoisseur") in 2015, says initial investors were quick to tell her that cannabis brands were for a general demographic, and that a luxury market simply didn't exist. "I'm glad I didn't believe that to be the case," she says. "People appreciate quality product, branding and craftsmanship and are willing to pay a premium if you can deliver that. They want to see lifestyle brands that are more reflective of the life they live, instead of the tired media tropes surrounding cannabis consumption. The key now for brands is to be able to deliver that whilst under the strict marketing and advertising rules we have to contend with."

A big ol' blunt is forever, but that's not to say the rolling paper can't be millennial pink. "We are artists by trade, so aesthetics inform everything we do, from product development and packaging to how we engage with people," says Brandon Andrew, co-founder of Calexo, a line of sparkling cannabis-infused beverages. The result? A minimalist design that's begging for an Instagram filter with the caption "TBT... to when we could actually be outside."

This sleeken-ing, if you will, isn't coincidence, but rather an effort to evoke the same feeling that one might get from unboxing their first Telfar bag. "From the beginning, we chose to look at the vape pen not as a piece of technology, but as a fashion accessory," says Faun Chapin founded cannabis brand Sonder with her partner M Paradise. "It had to look good in your hand, it had to feel special, it had to feel cohesive, and it had to feel like it transcended the technology inside it while telegraphing delight. We weren't interested in a plain battery with a logo on it, we wanted to create something iconic and stylish."

Meanwhile Artet, a non-alcoholic cannabis aperitif, draws its inspiration from Art Deco architecture to inform the silhouette of its blue matte finished bottle. "We are deeply inspired by the Mediterranean lifestyle celebrated in Campari and Martini posters from the 1930s," co-founder Xander Shepherd says. The goal, according to him, is less to stand out so much as it is to fit in as an outlier amongst cocktails you've already got on your shelf. Rose LA founder Nathan Cozzolino similarly wanted something that could look at home on a home coffee table. For him, like any great couturier, the devil was in the details. "We use two typefaces," Cozzolino explains. "Both are variable typefaces, so typefaces that are adjustable along a master style axis and can vary on a sliding scale of adjustment. We felt like this was sympathetic with the experience of edibles: that there's always a nice slight level of distortion and modulation from the original."

For others, like Humble Flower Co., design and packaging is a useful way to normalize the use of THC and CBD as part of a daily regimen for both skincare and wellness. But in pushing into the skincare and wellness space, comes competition from a whole new market segment, and thus a greater need to stand out. "The challenge is to create something new and fresh that the tastemakers will align with," says co-founder Thea Wayne, noting the importance of the tastemaker in influencing brand awareness. "We did so by our acute attention to detail and meticulous design process using elements of surprise, like the marble print on the inside of each box. The products came first, and the aesthetic was crafted with the ethos behind the products in-mind."

"Just as having a quality product isn't catered to the whims of fashion/trends, neither is quality design. It speaks to people because the message and aesthetics fit one another," adds co-founder Jordan Darian.

Related | Is It Worth Getting Dressed Up to Stay at Home?

It's impossible to talk about weed entrepreneurship without noting that many people of color and LGBTQ+ people have been locked out of the burgeoning legal cannabis industry, which comes with expensive start up costs as a result of tough regulations and licensing requirements. "You don't get a second chance as a woman or as a LGBTQ person or as a person of color, you have to be perfect every single time," says Sonder's Faun Chapin. Thankfully that too is beginning to change. There's Black owned high-end brands like the aforementioned Apothecarry as well as 99th Floor, which has chef Miguel Trinidad destigmatizing cannabis through the universal language of food and Verdelux, selling THC and CBD-infused chocolates. There's also Wings of Wellness, a medical marijuana delivery service founded by Leon Mostovoy, a trans man, plus progressive brands like Sonder, which counts only one straight white man among its staff of dozens.

Could the golden age of cannabis be upon us? Maybe so.