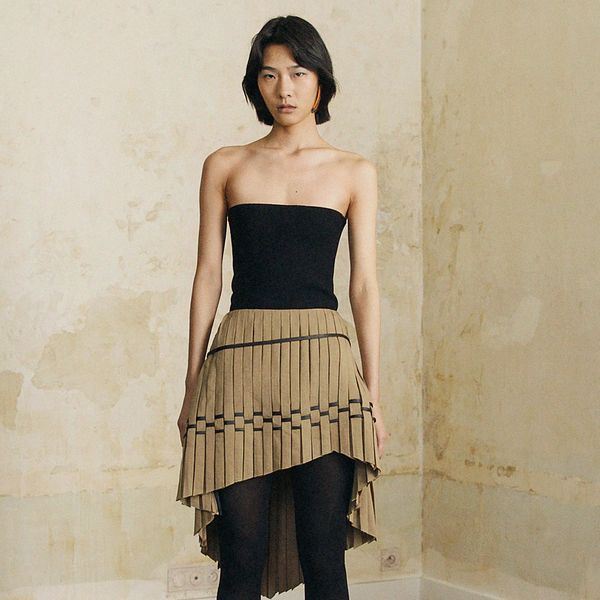 22-year-old self-taught Canadian designer Vejas Kruszewski is something of a prodigy. He founded his label in 2016, and quickly went on to win the coveted LVMH Special Prize. Kruszewski then took a job as the creative director of new Italian leather brand Pihakapi, and took a break from his own eponymous line. But now he's back! The designer showed a Spring 2020 Vejas collection through special appointments in Paris, where he now lives. And it is – unsurprisingly – very, very beautiful.

"There are different ways to expand on the vocabulary and build up the world of a brand, it doesn't just have to be a show," Kruszewski told Dazed last year, in an interview regarding Pihakapi's debut collection. "There's a way I want to communicate the visual language and I think there might be some interesting collaborations that could be possible in the future." Some of the videos feature supermodel and activist Hanne Gaby Odiele, who wears an intricate pleated gown with leather trim (and all of the models sport shoes from Italian brand Maiorano). The designer told Vogue that the dress was inspired by a Japanese broom.

As Vogue reports, Kruszewski's latest offerings were influenced by the work of legendary French couturier Madame Grés and designer Gilbert Adrian, who made costumes for dozens of classic MGM films, including The Wizard of Oz. Grés was known as the queen of drapery, and a number of the new Vejas garments feel like her "goddess dresses," updated for 2019 with asymmetrical hems and unexpected silhouettes, like a fitted, short silver jumpsuit. The bomber jackets are sure to be a bestseller, and separates are languid, flowy, and beautifully tailored. We're so glad to see him back.