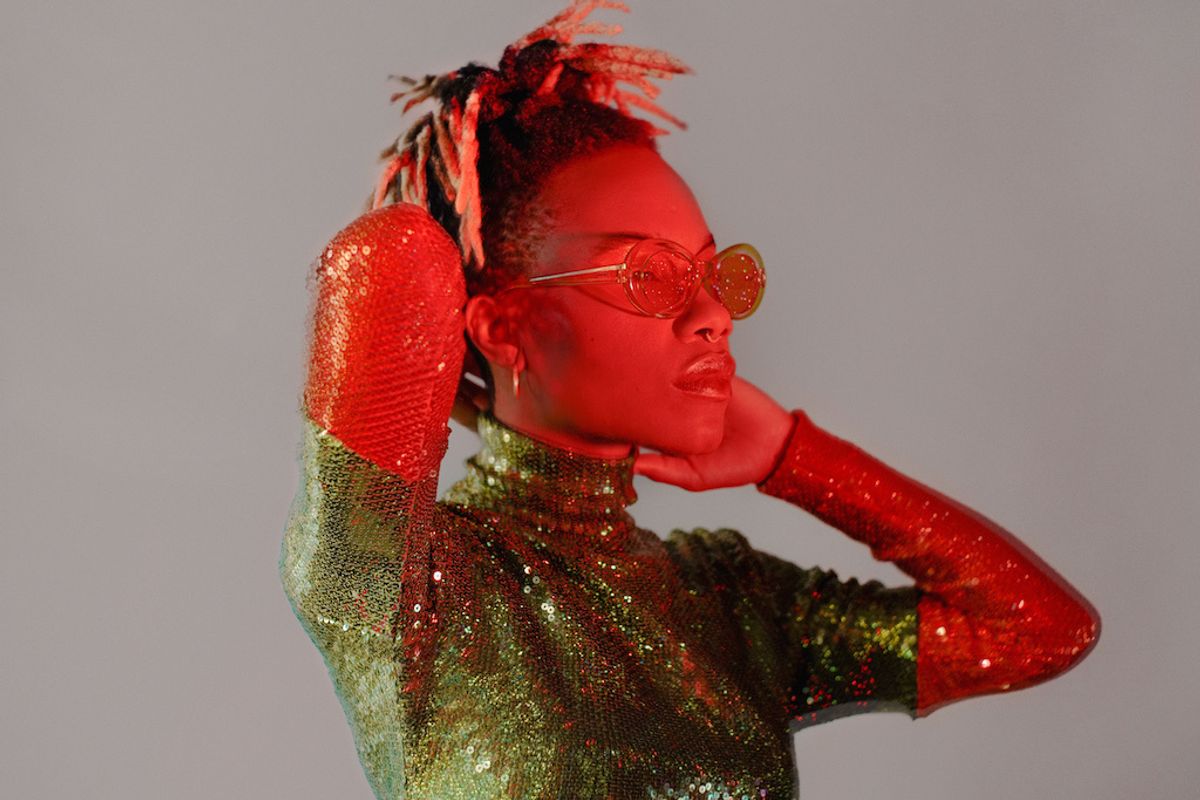 Dion McKenzie, aka TYGAPAW, is a multi-hyphenate creative (DJ, designer, producer, party promoter) who has created some of the most inclusive parties in NYC nightlife. In addition to graduating from the Parsons School of Design, the Jamaica native is also a self-taught music producer known for her emotional club bangers that lend themselves to the queer, inclusive spaces she's created through parties like Fake Accent and Shottas. We caught up with McKenzie to talk about dancehall's crossover into mainstream music, male-dominated nightlife spaces and what it means to make it as an immigrant in today's America:

Has music always played a big role in your life? When did you know it was something you wanted to pursue full-time?

Yes it has. I think my earliest memory was when I sang Whitney Houston's "The Greatest Love of All" to my family on Christmas when I was around 5 or 6. I knew the lyrics word for word. Even though I wasn't sure why at that point, I understood at that age that music was powerful and it meant a lot to me. It's been a consistent source of therapy my whole life. A lot of my journey has been driven by a ton of self-motivation, being my own mentor, and finding my way without much support. But that changed when I came to NYC in 2002. I met some amazing like-minded people who saw my potential, believed in my vision, and supported me along the way. With this support and friends encouraging me, I gained the confidence to pursue music as a career path. Just recently, I began practicing where I direct my creative energy. It's important to me to focus on projects that I am truly passionate about, and to work with positive people .

Nightlife (and music) can be such a male-dominated space. How have you coped with that?

There were so many times where I reached out to a male DJ friend, asking them if they had any open slots at their parties that I could play. They always gave me the run around, the "soon come" response, and then I would find out that they gave the spot to one of their male friends. That blatant patriarchal structure is why I started my own party called Fake Accent in 2014. That's pretty much how I coped, by starting my own thing.

It definitely wasn't an easy thing to do, but I felt it was necessary if I ever wanted to play outside of my bedroom! It's wild to look back and realize how difficult it was just to start Fake Accent. In the beginning I visited several bars inquiring about doing my party there, but I would get the default response to email them, and when I did, I'd get no response. Finally one venue responded with a yes, and that's all it takes, just one yes, and that was the beginning of Fake Accent.

What goes into curating a party? How do you decide who to book?

For me it's about creating the right vibe, and the right vibe is whatever makes folks enjoy themselves and forget about their troubles for a moment. That usually involves music that compels the body to move involuntarily.

One of my major objectives is to create an intentional space that promotes inclusivity. I aim to select DJs based on skill and talent and not based on how many social media followers they have, since that rarely has anything to do with actual talent! I do my research, I look into DJs that my friends recommend and then I'll find out the next time they will be playing and I'll go check out their set. If I can't help but "carry" on the dance floor during their set, then that person is on my radar after that. There's no substitute for seeing someone play live. That's pretty much how I make my decision on which DJs I want to book.

The climate under the new US administration makes representation feel more vital than ever, but it's always been an issue. How does being queer and being an immigrant from Jamaica inform your work?

My road as an immigrant in the US has been a very long, winding, obstacle-riddled one. I lost a big chunk of my ability to be creatively productive in my twenties due to immigration. Most of the time people are unaware that as a queer black immigrant, I've had to start from scratch, from zero, with little to no support. I've had to work extremely hard to get myself out of the immigration black hole to get to this place where I've built something out of nothing.

I wish people were more aware of how restrictive life can be here as an immigrant. It's especially difficult as a queer artist of color, where all you desire is the freedom to speak freely and openly and express yourself through your work without limitations. One thing that has helped me to get from point A to B is patience. My whole life here has felt like one big deadline after the other. What has really helped me not spontaneously combust from all the pressure, is the feeling that time stands still when I create music. For that moment when I'm creating, I'm not affected by the external. I hold onto those affirming moments when it feels like everything will be alright, knowing I've been through the worse, so it's only up from here.

Shottas is your other party. What are the differences between the two parties, and where did the names come from?

Unfortunately Shottas is no more due to some unresolved issues, it was a good run though. I'm starting a new party under Fake Accent called No Badmind which picks up where Shottas left off. No Badmind is an inclusive club space and platform for Queer and Trans Caribbeans, who are often the most underrepresented and misrepresented group of the LGBTQ community due to the lack of genuine safe spaces and platforms. No Badmind's mission is to rectify all this by providing an authentic queer Caribbean club experience which promotes good vibes and inclusivity.

Jamaican music has been a major player on the world stage of music for a long time, and dancehall in particular has been a popular sound this year in mainstream hip-hop. What's it like to see other cultures interacting with your country's music? Does it feel exciting or appropriative?

It's cool that people love our culture and the music we produce. But what's not cool is taking from and capitalizing on our culture for personal gain and not giving credit to those who have built and represent the culture you are appropriating and claim to love so much. Erasure is a very big problem when it comes to "borrowing" from dancehall. For example, when I hear Assassin's voice on a hip hop feature, giving the illest hook — which made the track in my opinion — and then I check the track credits and his name is MIA, then I know something is very wrong there. I love when dancehall artists and hip-hop artists collaborate, but dancehall artists need to be credited and paid for their work on these top 40 tracks that they contribute their powerful voices to. So this erasure that occurs with appropriation is what I hope will change.

What do you wish people understood about Jamaica? And, do you go back often?

Jamaica is a beautiful country, but I wish we owned that beauty. I wish that beautiful island belonged to us. I wish my country and people weren't indebted. As for me visiting home, you have to have coin in order to travel to Jamaica. I wish I had the coin to go back often. That brings me to the fact that I've sacrificed a lot in order to do what I love for a living, and one of those sacrifices is not being able to visit my homeland as often as I would like. In this line of work you are constantly being tried in regards to getting paid what you're worth, especially if you are black, queer and a womxn. It's an industry that thrives on black culture but doesn't value the people who create the culture. But to answer your question, I would definitely book a flight to JA if I got paid more coin for my work! Where are the reparations? We can start there.

What's your vision for the community you've created in New York?

For disenfranchised and marginalized communities to have the opportunity to thrive. For folks to show more love, support, and consideration for each other. For all black creatives to have a seat at the table, or at least gain access to resources to build our own table and sit there. I just want everyone I love to thrive, and I hope that I can continue to provide platforms that help to elevate my community.

What other projects do you have coming up in the pipeline?

I released my first EP this past November and I'm working on a performance piece for it, which I'll be presenting March 18th at Larrie Gallery in New York. I'm currently collaborating with photographer and filmmaker Ward Roberts on a short film visual representation of Love Thyself, which will premiere before the performance. The next No Badmind will be on my birthday, February 24 at Mood Ring, so I'm really looking forward to that. I'm also aiming to release more music this year. Fake Accent's four year anniversary is coming up in the spring. We'll be releasing Volume 2 of the Yin Yang compilation which will be available for purchase on our bandcamp. After that, I'm going on tour in Europe in May and then back for my residency at Pioneer Works in Red Hook, Brooklyn in July.