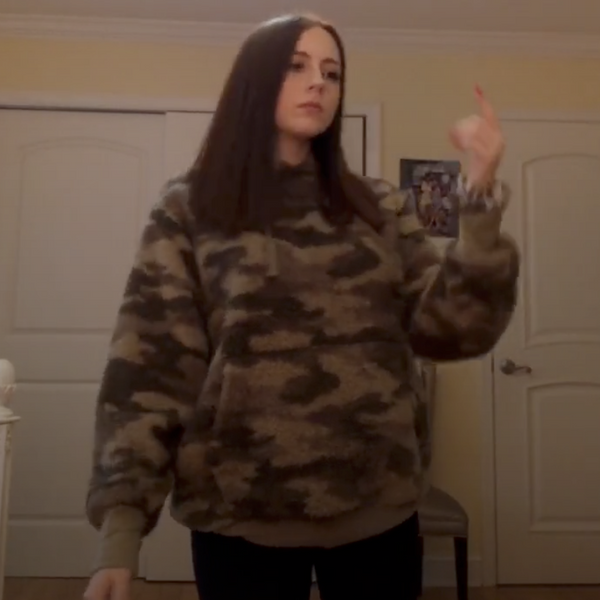 TikTok Users Are Dancing to Their Toxic Exes' Voicemails

A new TikTok trend involving young women dancing along to audio of their exes' toxic and abusive voicemails is going viral.

A new spin on the "Me dancing to..." meme, it all started with a user named Bella Dorlando who posted a TikTok captioned, "Day 1 of dancing to voicemails from my cheating ex boyfriend."

Related | 5 Signs of an Abusive Relationship

In the video, she can be seen moodily dancing along to a recording of her ex-boyfriend's pushy voicemail "apologizing" for cheating on her, in which he pulls out some gross guilt-trip tactics such as, "I'm telling you all this and you still don't trust me," and "without you, I'm just going to go back to fucking hell. I'm not forcing you to stay with me, though."

Watched one of these where the girl dances to a recording of her abusive ex screaming at her because she wore leggings to school. Her next four videos were follow-ups advising other girls how to spot red flags. Truly awe-inspiring. https://t.co/PvoYIe0mYU

Obviously, the video struck a chord with other young women on the app, who also began uploading their own versions of Isabella's video.

Not only that, but the empowering meme has spurred a few more spins on the trend — all of which see girls dancing, albeit above fucked-up voicemails from "friends" or gross texts from their exes.

That said, it's much more than just a funny meme. One of the most powerful videos to pop up came from an 18-year-old named Tenley, who made a TikTok captioned "Dancing to my ex yelling at me for wearing leggings to school," as well as a subsequent follow-up video talking about "red flags."

As Tenley alluded to Rolling Stone, the outpouring of support she's received in response to the initial video points toward the fact that many people stuck in abusive relationships aren't aware of a lot of the red flags or warning signs.

"So many girls DM me saying, 'I've been through the same thing,' and some are saying, 'I'm literally dating someone like this now and this showed me I needed to get out,'" she told the publication — which, honestly, is the only proof I need to know that the kids are alright.