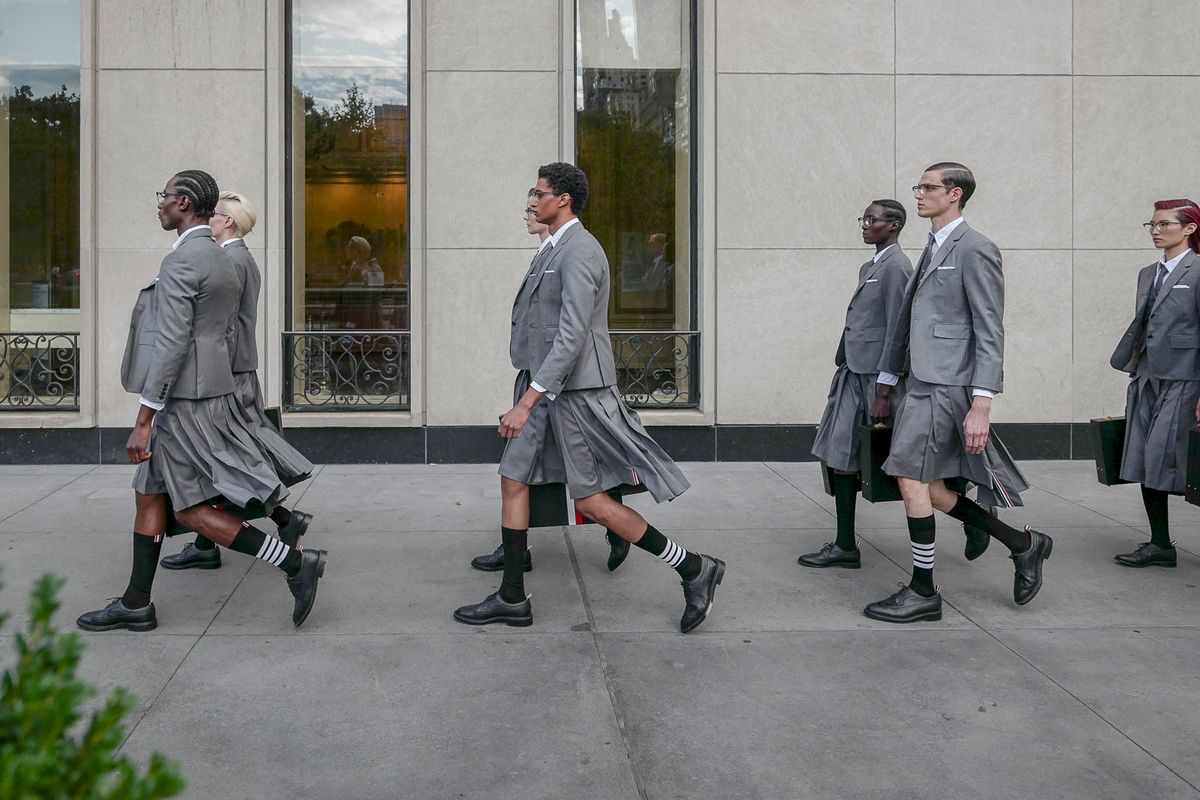 Have you ever walked through a sea of suits in Midtown? The neighborhood is swollen with dark fabrics and Samsonite briefcases, loud conference calls conducted on street corners, hands reaching up to smooth slicked haircuts, the clacking of practical heels. And so it makes sense that Thom Browne, designer of impeccable suiting, would choose to host an event there–right outside of Bergdorf Goodman, across the street from the Plaza Hotel.

Browne decamped for Paris Fashion Week two years ago, and he'll be holding his official Spring 2020 show there in a few weeks. New York has felt the loss — his shows are fantastical, the stuff of legend (back in 2017, I wept at the sight of an enormous tulle unicorn). And so in an act of generosity, his presentation Saturday was held outside, essentially open to the public.

Browne led his models in a performance called "The Officepeople," hosted in celebration of his first womenswear release at Bergdorf Goodman. Onlookers gathered at the Pulitzer Fountain on 5th Avenue as models, all dressed in identical pleated skirts and blazers, poured out of a Thom Browne-branded school bus, looking a bit Patrick Bateman meets Constance Billard. They silently walked up the block in pairs, moving with steely efficiency, before stopping to sit at the edge of the fountain. They opened their suitcases in unison, pulling out squishy peanut butter and jelly sandwiches and munching away. And then they reached for books (male models got The Hardy Boys, female models had Nancy Drew), and flipped through a few pages before getting up and walking away again, all with military-like precision.

As the models filed out, a trumpet player followed, playing a solo to gaping tourists (and a few celebrities–Browne favorites like Game of Thrones' Maisie Williams, Lee Pace, Vic Mensa, Moses Sumney, and Natalie Dyer and Charlie Heaton from Stranger Things were all in attendance). Attendees were lead up to Bergdorf's third floor for a cocktail party, where models tapped at typewriters that purposefully didn't work, filled with Browne-branded paper.

"Everybody yells at me for moving to Paris, but it has nothing to do with not wanting to be here — I do actually miss doing things in New York as well," Browne told W. We'll take anything he wants to give us.