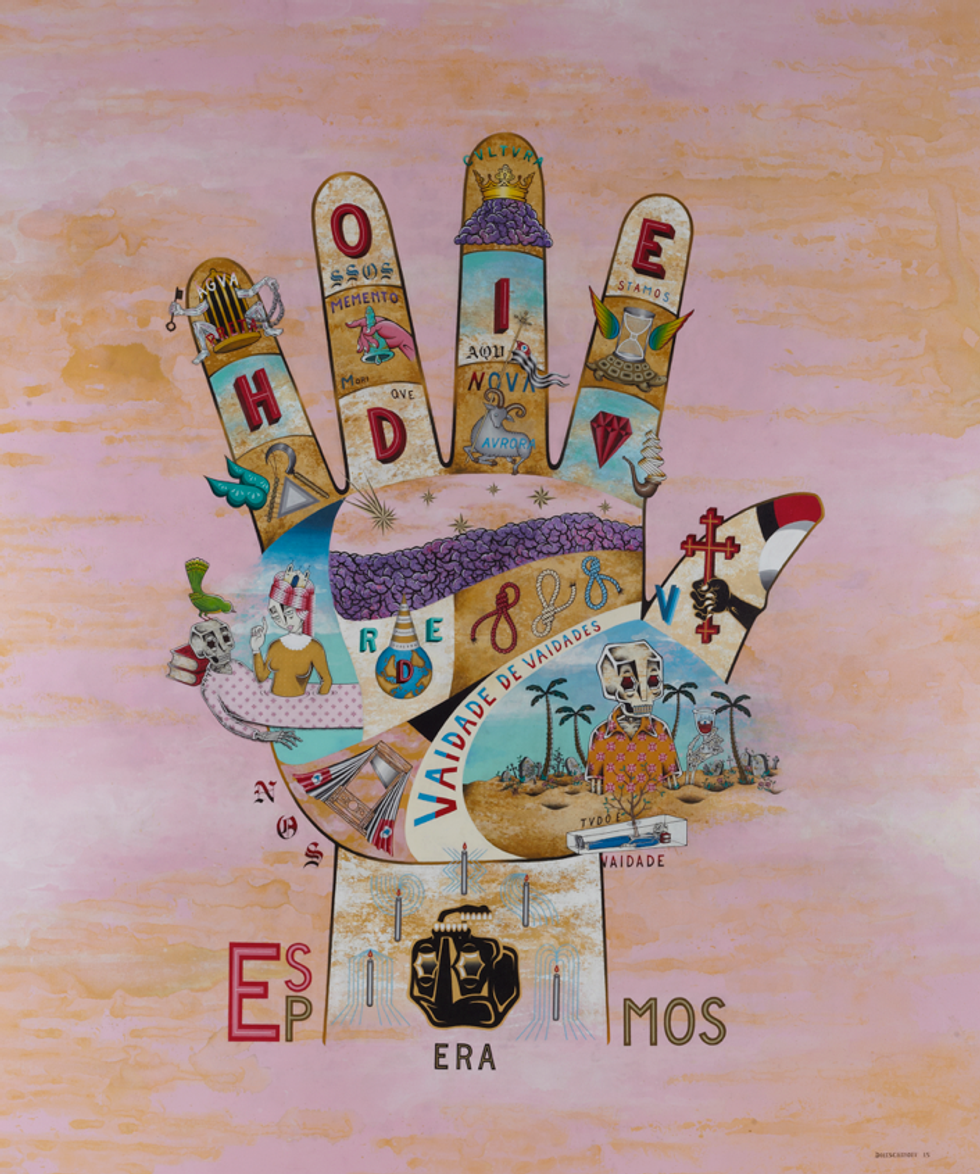 by Gary Pini
PAPERMAG
Kevin Beasley
New York artist Kevin Beasley presents a new sound installation, "Untitled Stanzas: Staff/Un/Site," on the High Line at West 30th Street and 12th Avenue this week.  He has been recording ambient sounds nearby and will "amplify, accentuate and process" them while also layering the recordings of each performance onto the following days'. Check it out on Wednesday and Thursday, September 23rd and 24th, at 6 p.m. It's FREE and open to everybody.

Knockdown Center (52-19 Flushing Avenue, Maspeth) opens a group show, "Surface Matters," on September 24, 6 to 9 p.m.  The works focus on familiar materials that are deconstructed and transformed.  The show was curated by Holly Shen and Samantha Katz and the artists are Brett Day Windham, Carolyn Salas, Daria Irincheeva, Katie Bell and Leah Dixon. It's up until October 17th.

"Tension."
Head out to Red Hook on Thursday, September 24, 6 to 8 p.m., for the opening of a big, new installation by Joseph La Piana featuring over 2,6000 feet of yellow latex stretched across a warehouse at 202 Coffey Street. The work, "Tension," is presented by the Denis Gardarin Gallery and it will up through Sunday from noon to 6 p.m. daily.  There's also a La Piana exhibition, "Contiguous: 30 Works," at the Brooklyn artist's studio that you can check out before October 8th by making an appointment via the gallery: info@denisgardarin.com

Agathe Snow presents the last in a performance series coinciding with her current "Coyote Ugly" exhibition on Wednesday, September 23rd, 7 p.m. in Albertz Benda's new project space at 515 West 26th Street. The gallery has been configured as a labyrinth "to channel sensations of divided identity, time and space."  Because space is limited, please RSVP to: rsvp@albertzbenda.com

"Red Velvet"
360 Design Gallery (104 Charlton Street) opens a new exhibit of Marilyn Monroe photos on Thursday, September 24th, 6 to 9 p.m. The show includes the color separations used to produce the iconic "Golden Dreams" calendars from the 1949 "Red Velvet" photo shoot and other rare photos of Marilyn with Carl Sandburg taken by Len Steckler.  Also on view from 11 a.m. to 6 p.m. on September 25th and 26th.


Catch more "Marilyn" at the opening of the Jewish Museum's (1109 Fifth Avenue)  "Becoming Jewish: Warhol's Liz and Marilyn" on September 25th. The show presents several portraits of the two celebs, both of whom converted to Judaism in the 50s.  On view until February 7th.

Andeshi Avini
Marianne Boesky Gallery (118 East 64th Street) opens a new show by Andisheh Avini on Thursday, September 24th, 6 to 8 p.m.  For this, his second show with the gallery, the artists takes over the entire townhouse while "re-staging and challenging his visual memories with tableaux vivants that allude to the past." On view until the end of October.

ONGOING (and worth a look):

Debbie Harry by Christopher Makos
"The Downtown Decade: NYC 1975 - 1985" at Glenn Horowitz Rare (17 West 54th Street) until October 10.  (You should have saved those Danceteria invites and Club 57 flyers.)

Bettina WitteVeen. Photo by Michelle Young for Untapped Cities
Bettina WitteVeen photo installation, "When we were soldiers...," at the abandoned Hospital at the Brooklyn Navy Yard (Flushing Avenue at Grand Avenue, Brooklyn) until October 24.