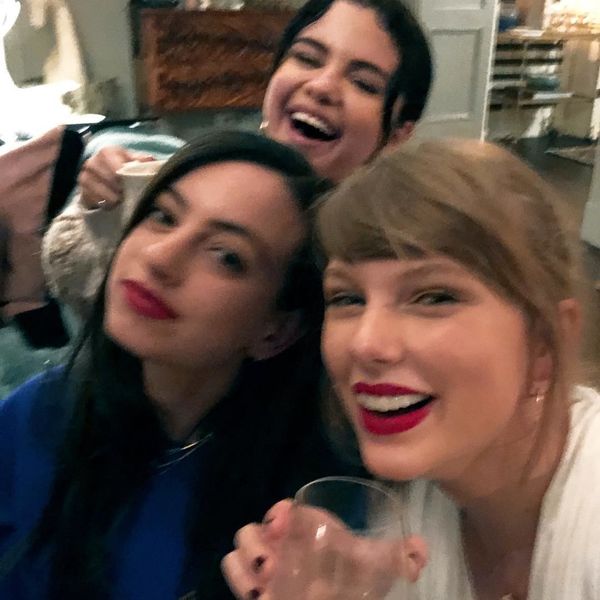 What even is Taylor Swift's social media strategy these days? She wiped her once famously cat photo-heavy Instagram grid in the lead up to releasing Reputation, then went for an edgy re-brand featuring hissing snakes and gothic fonts. Late last year she got political, urging followers to vote in mid term elections. Recently she's returned to her wholesome roots: hiking in the woods, throwing a twee New Year's Eve party. As of this week, though, the vibe is wine mom.

On Thursday afternoon, Swift posted what I think must be her first drunk social media selfie ever. It features a wine glass, plus two fellow It girls: Larry David's daughter Cazzie David, who dated Pete Davidson right before he got with Ariana and recently scored a book deal, plus a smiling Selena Gomez. Ever the wordsmith, Taylor came up with a catchy caption: 20wineteen.

Related | #20Ninescene Is Bringing Back 2000s Scene and Emo Looks

20wineteen! You can't argue with that. I'm mentally pouring a glass right now.

@cazziedavid on Instagram: “Had a meet and greet for my fans last night. I love u all”

Gomez is off social media right now, taking a mental health break. But David posted a cute matching selfie on her own account, confirming longtime Swift Squad member Este Haim was also present for wine time. Where was my invite?