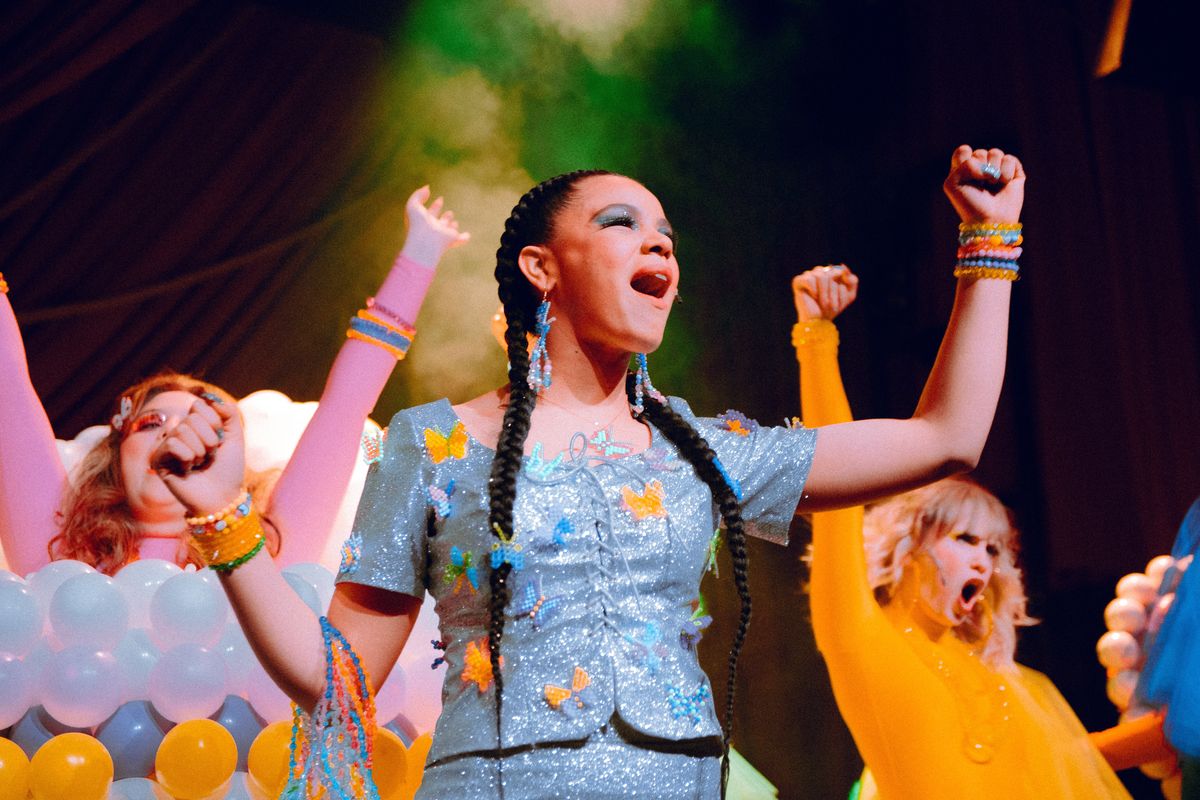 Susan Alexandra's Musical Is a Smash

A trumpet immediately greeted you in the basement of the Public Hotel for Susan Alexandra's Saturday morning show, crooning out classics from The Sound of Music and The Little Mermaid. The room vibrated with excitement for the NYFW presentation, as the assemblage of press and Instagram glitterati satiated themselves with minty cocktails and sugary Milk Bar snacks. Everyone was itching to see how Alexandra would interpret her much-coveted beaded handbags this season.

As it turns out, the title of the day's proceedings, Susan Alexandra: The Musical, did not disappoint. The trumpeter disappeared behind velvet curtains to be replaced moments later by a cast of incredibly talented vocalists and comedians, including Benito Skinner, Larry Owens, Megan Stalter, Mitra Jouhari and Mary Beth Barone — each clutching a cheeky-chic handbag to complete their ensembles of jewels, spandex and tulle.

The audience screamed as lead singer Aisha Kerensa, playing "Susan" herself, began belting out her plight to open a real brick-and-mortar shop in SoHo, hoping to expand her brand beyond Instagram feeds and into the real, palpable world of Lower Manhattan. The sentiment vibrated throughout the event, which was so filled with heart and raw joy that even the most cynical fashion snob must have felt compelled to quit pouting behind their sunglasses and sing along.

Over the course of the show (music and lyrics by MUR), Susan meets a cast of kooky characters (rounded out by Sasha Spielberg, Hunter Abrams and Jessica Joffe), who ultimately help her to realize her dream of selling her wares in the glossy windows outside Broadway-Lafayette.

And what wares they are! Saturday's show saw bags made from Alexandra's signature beads in shapes of all kinds: some looked like martini glasses, others dripped with rainbow bead chains, still more were decorated with beautiful white bead-clouds. Every handmade creation certainly lived up to the brand's mission statement, focused on "bringing joy, dazzle, and wow to your existence."

And the clothes! One character was draped in satiny red jewels and fringe, followed by a coven of New York demons exploding with black ruffles and a cacophony of rainbows and cherries.

It's not Alexandra's first time dazzling audiences through unorthodox presentation — last fall she tickled with a high fashion bat mitzvah, and before that, with drag queens and bagels. Still, to see the designer pushing her vision to even bigger heights with a full-fledged musical felt groundbreaking, revolutionary... inspiring this viewer to want to buy one of those bejeweled crop tops and spend the rest of the day recreating Chicago in their apartment.